Mark Cerny, the lead system architect for the Sony PlayStation 5, took a deep dive today into the solid-state storage drive (SSD) for the upcoming video game console that launches in the fall.

That’s pretty geeky talk for a game console revelation, but Cerny did a good job explaining why the strategy around the SSD is important to both game developers and gamers. The talk was more like a developer-to-developer talk for the Game Developers Conference, but Sony took it online after GDC was canceled.

He revealed the details during a video presentation, noting some industry history at the outset. He said designing a game console has to shoot for both revolutionary features and respect for the past, such as ensuring developers will know how to make games.

Cerny said PlayStation 4 struck the right balance on how to balance performance with the familiarity with the x86 programming model.

With PS5, the GPU was the part with the most tension, striking a balance between innovation and familiarity. But the programming model is the same, as the PS5 will have a main chip that includes both an Advanced Micro Devices central processing unit and a AMD Radeon RDNA 2 graphics processing unit. Both of those processors will be on the same chip. 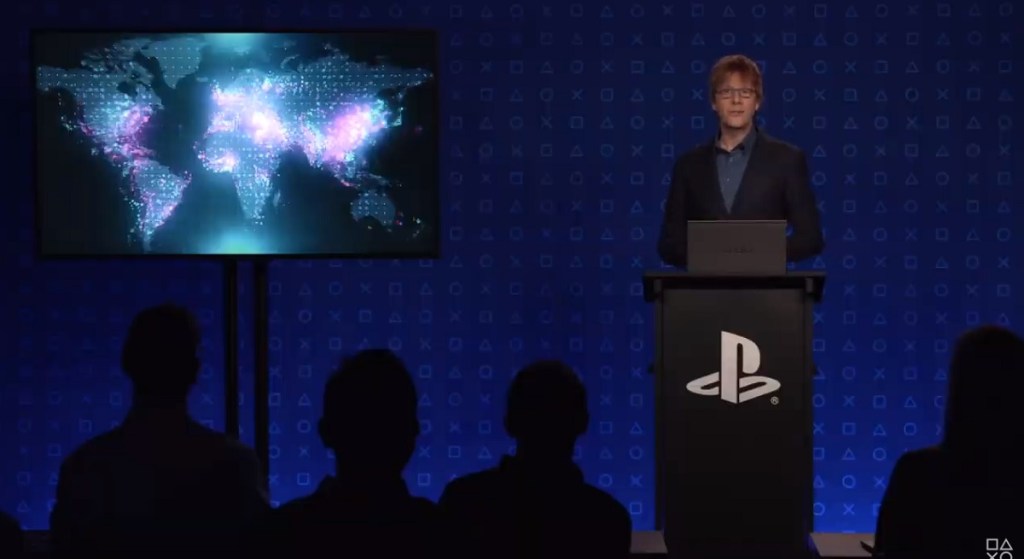 Above: Mark Cerny traveled the world to get feedback for the PS5 design.

On his explorations with more than 100 game developers, the main request was to add solid state drive (SSD) memory, which is faster than a hard disk drive in delivering data for games. Those hard drives were valuable in a way, as they made feeding data from Blu-ray disk drives possible, but developers were banging up against the limits of the hard drive.

“To me, the SSD is a game-changer,” Cerny said.

For players, that meant slow load times and even slow “fast travel” times. SSDs can load at 5GBs a second, with an almost instantaneous seek time in finding data. So the load time for 2GBs of data from an SSD is 2.7 seconds, or 10 times faster.

For gamers, this is good. The game for a PS5 will boot in a second. For reloading after you die, you are immediately back in the action.

But that’s not the main reason that Cerny included the SSDs, he said. The primary reason is the SSD gives the game designer more freedom. The hard drive sabotaged the game design in the past. Like having a 30-second elevator ride to load something. They just couldn’t do what they wanted to do.

Developers came up with solutions like storing data in chunks for related objects, but it results in objects being placed in duplication many times on a Blu-ray disc or hard disk. Patches take a long time to install because new files have to be duplicated before being actually patched.

With a faster SSD, system memory (random access memory, or RAM) can now be used more efficiently. On the PS4, system memory had to store all the memory that could be used in the next 30 seconds of gameplay. So data was sitting in memory on the potential to be used. With 16GB of main memory, or random access memory, the loading is fast enough to get the data and load it far more quickly, without needing to store so much in a cache. A lot of the PS4 data never got used. That’s not the case with PS5. 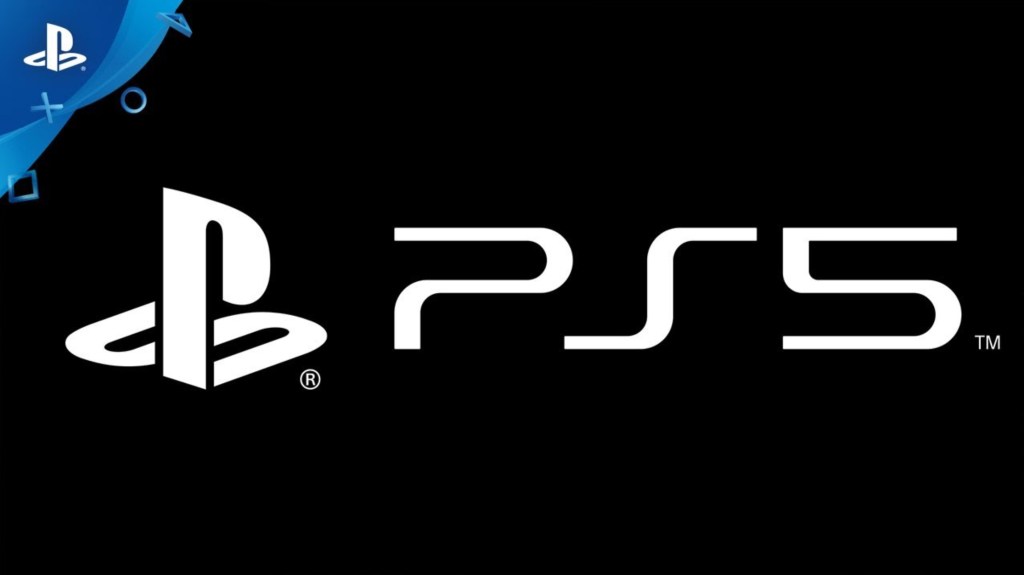 Above: The PlayStation 5 specs have arrived.

So that helps eliminate the bottlenecks related to loading speeds. To further improve speeds, Sony added a custom chip to serve as the interface to the flash memory chips in the SSD.

By the way, RAM has to be electrically refreshed and loses data when it is turned off; flash memory chips retain data even if the power is turned off. As a result, flash can store games permanently while the faster RAM is used as system memory for a game that is being played. All of these improvements that Cerny is talking about can be used by Microsoft as well on the Xbox Series X, which also uses SSDs. 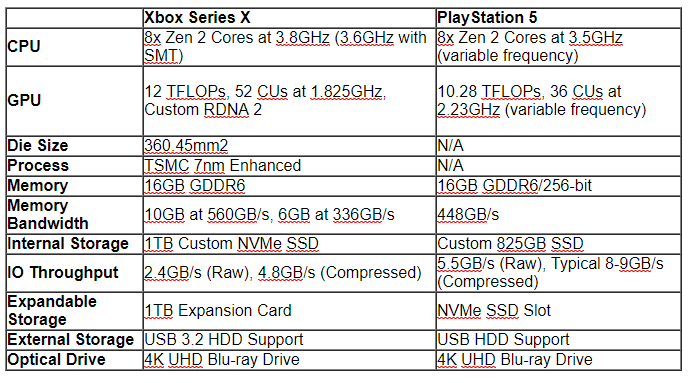 Above: Sony’s specs vs Microsoft’s.

But Sony also tried to add its own unique improvements to the system and gameplay performance. This is where you may notice differences between the upcoming PS5 and the Xbox Series X.

With a custom flash memory controller, Sony solved a lot of the SSD bottlenecks. It can help smooth operation, with six levels of priority when reading from the SSD. While textures are being loaded, an enemy might be shot and have to saying some dying words. That interrupts the texture loading.

So Sony added 12-channels for the flash interface. That helps speed up the flash, but flash isn’t cheap as a form of memory. Sony had to balance the cost, so that it could keep the price of the console down. Sony focused on a flash size of 825GBs, connecting at a speed of 5.5 GB/second.

Rad Game Tools created Kraken, with 10% better decompression performance for data. It was used on the PS4 and it was popular for later games in the PS4 generation. The custom decompressor for Kraken is in the main custom chip (which has both an AMD CPU and AMD Radeon RDNA 2 chip, and there is a DMA controller, two I/O processors, and on-chip RAM, on the SSD chip. It links to system memory and to the custom flash controller.

“The whole processing of loading data and showing it to you happens faster,” Cerny said.

Flash is costly, so you can add external hard disk to the game, at 100 megabytes for second. You can leave a library of games on a hard drive, such as PS4 games. You can play those games off the hard drive if you want.

You can also add external SSDs from the open market and install them in a bay on the PS5. They connect to the custom I/O unit and take advantage of those features. But the external SSD has to be as fast as the PS5 SSD.

There could be drives that support 7GBs a second by the time the PS5 ships. Sony will have to test which drives can meet requirements, so Cerny said to hold off purchases of external SSDs at the moment.

Sony is adding backward compatibility of the PS5 so that it can play PS4 games.