The most difficult enemies 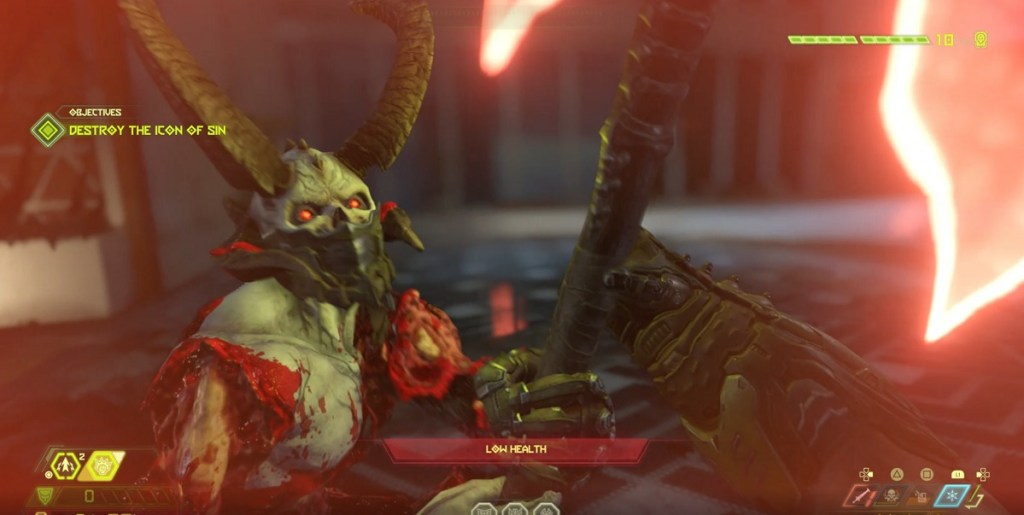 Above: A satisfying moment with the Marauder on his knees.

Use the Super Shotgun on Marauders. The Marauder is a fast demon that is good at both short-range melee attacks and long-range axe throws. Your only chance is at medium range. And you can’t fire anything else at it, as it will dodge the slower weapons. It will also shield itself against most attacks.

Your only hope is during a well-timed moment. When the Marauder’s eyes glow green, it’s about to strike. That is your chance to fire the Super Shotgun at it. If you hit it once, you can fire again and hit it twice. After that, it will move around you and you have to be prepared to run. In my first battle with the Marauder, it was in a confined space. That was somehow easier.

I had a hellish time trying to run away from the Marauder during my second battle with yet another one of these demons. (They throw a few of them at you in the game). I kept running and waiting for minions to spawn so I could get back armor and health. I finally got enough shots in on the Marauder to stagger it and take it down. But it was grueling. It’s best to take out all the minions and other demons around it so you can give the Marauder your full attention. Eventually, I got better at the Super Shotgun timing, but Marauders were always the toughest enemies.

Find the Archville. This demon is like a commander. It buffs other demons’ strength and speed, and spawns a bunch of them. At first, you won’t know where the Archville is, but you’ll see the demons glowing. If you don’t get to the Archville in time, they will spawn. You can spot it trying to do a spell, or you can see its flaming shield. You can take out the Archville’s shield with a Blood Punch, and then a bunch of shots with the Super Shot gun can bring the Archville down. But all of the other minions will converge on you as you do this. You may not be able to take him down in a single fire session, so you’ll have to come back a second or third time and finally take him out.

The Gladiator has a weakness. When the Gladiator’s eyes flash green, he is about to attack you. Shoot him at that point to make him stagger, giving yourself an opening. In the first stage of the battle, you have to dash a lot to avoid his mace and shield attacks. He spawns a lot of demons, and you can use these as fodder for your resources.

In the second stage, he drops his shield and is faster. He has flails, or long whips, that can trap you. If you are caught, find the high point for the flail and stand under it to minimize damage.

The Plasma Rifle fells the Doom Hunter. It takes a while to bring down the Doom Hunter, who is half-demon and half-machine. He is protected by a shield, which you can take out with the Plasma Rifle. Once that is done, you can keep that up or switch to a rocket or a Heavy Cannon Precision Bolt mode sniper rifle to take out his mechanical side.

Pinky demons are weak in the butt. If you find yourself faced with this pink rhino-like demon, you have to dodge its charge. And if you do so, it will run into something else and just hit a wall. That’s your chance to sneak up behind it and fire a rocket or Super Shotgun blast into its rear. That will take it out. You can take it out from the front, but it takes a lot more rocket hits. You can also take it out with a Crucible.

Find the freaking Buff Post. The Buff Post is a little cross that enables enemies to become stronger and more aggressive. It also enables them to respawn in wave after wave. It is usually hidden, and you can tell it is in place because enemies are bright red. You have to find this post as soon as possible and destroy it with a melee blow. If you don’t you’ll have an endless fight.

Use the Grenade Launcher on the Cacodemon. The Cacodemon is a flying demon that will bite you over and over. You can stun it quite easily with a grenade launched into its mouth. I didn’t equip my grenades, since I used the Ice Bomb mostly. So I used the regular Combat Shotgun’s grenade attachment to shoot a grenade into the mouth of the Cacodemon. That staggers it, and then you can do a Glory Kill on it to get some health back.

Level up your weapons 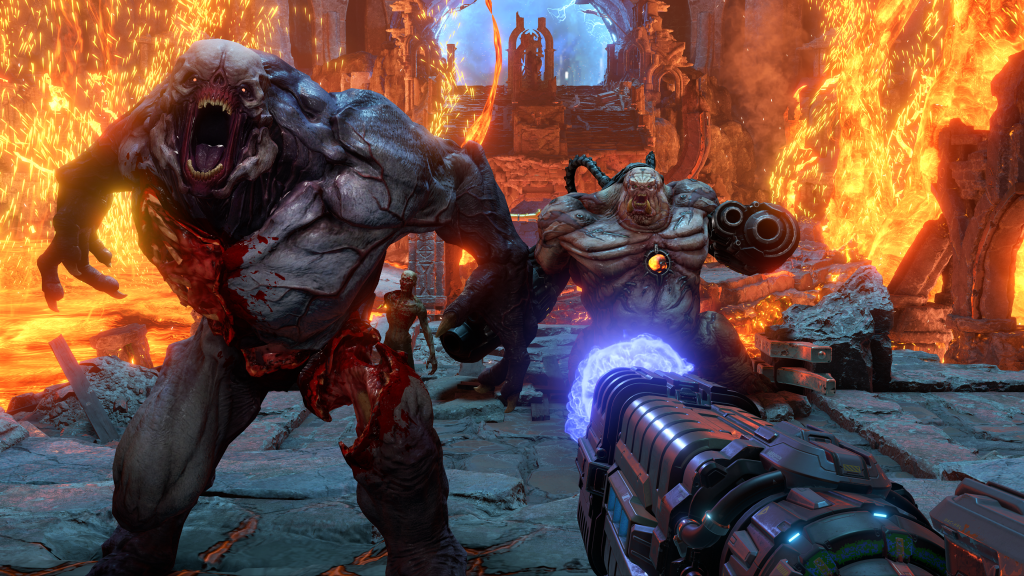 If you level up your Praetor Suit, you can get protection from environmental hazards like barrels, dash faster, switch weapons better, get better AutoMapping, and upgrade your Frag and Ice Bomb grenades.

I found the grenade launcher mod for the Combat Shotgun to be invaluable. It has an endless supply of grenades, though they are a bit slow to load. And I used my Mastery Coin (one of a couple of rewards you can find in the game — or you can earn it with great gameplay) to level up the shotgun so it could fire five grenades before reloading.

The Sticky Bomb mod on the Combat Shotgun can be upgraded to cause a bigger explosion size and increase the reload speed of the bombs. Weapon points are earned naturally through gameplay by completing combat challenges in a level. The Demonic Corruption Meter tracks the points you have earned, and each level offers a potential of 10 Weapon Points to collect. Spend them in the Arsenal tab in the Dossier to upgrade your Weapon Mods.

You should also make sure you get the Precision Bolt mod as quickly as possible. It gives you a sniper scope, which lets you shoot the turret off the damned Arachnotron, from afar.