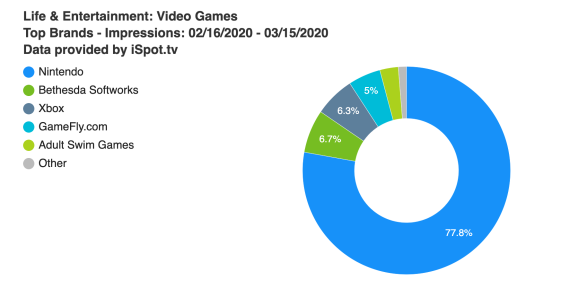 Nintendo crushed the competition for recent gaming industry TV advertising, with its ads accounting for over 77% of all impressions in the 30-day period ending March 15 — during a time when the coronavirus crisis was escalating, but before it fully transformed daily life in the United States.

What happens next for the gaming industry? Even as much of the U.S. economy continues to shut down, gaming could be a bright spot in the wake of CDC-recommended “social distancing” that has millions of people staying home. Given that context, could gaming industry revenue, and gaming advertising, rise despite an economic downturn? Stay tuned — but for now, a look at the very recent past.

GamesBeat has partnered with iSpot.tv, the always-on TV ad measurement and attribution company, to bring you a monthly report on TV advertising by the gaming industry. These are the ads, and by extension the games, that game makers have been putting major muscle behind.

Below are the top five most-seen gaming industry TV advertisers from Feb. 16 through Mar. 15.

At No. 3: Xbox, with 43.7 million TV ad impressions resulting from 218 airings of four spots. Its most-seen commercial (37.7 million impressions) was for Doom Eternal: “What Is Eternal?,” with slightly different creative than that seen in Bethesda Softworks’ own spot for the game — and with Xbox branding layered in. NBC Sports, Comedy Central, and SyFy were three networks with top impression-counts, while top programming included motocross racing, South Park, and Live PD.

GameFly.com takes fourth place with 35.1 million TV ad impressions resulting from 486 airings of five spots. “The Noon Train” was its ad with the highest impression-count (19.9 million). Top networks included Laff TV, BET, and NHL, while programs that generated high impression-counts included The Fresh Prince of Bel-Air, According to Jim, and That ’70s Show.

Adult Swim Games rounds out the ranking with 19.9 million TV ad impressions generated by three spots that aired 82 times, all on Adult Swim. The most-seen ad was “Announcement Trailer” for Samurai Jack: Battle Through Time. Family Guy, American Dad, and Rick and Morty were the top shows for impressions.