Reviewing Half-Life: Alyx has been a stressful endeavor. Part of that is the usual rigors of critiquing a game (trying to beat it before a deadline). But this VR experience is landing at a time when a pandemic is taking hold over the world. So, you know, I may already be a bit on edge. Bundle that with how playing VR can be uncomfortable and Alyx’s more survival-horror take on the franchise, and I often wished that I didn’t have to play this game at this particular moment in history.

This doesn’t mean that Half-Life: Alyx, which is available now for PC VR, is a bad game. It’s far from it. The expert Valve triple-A craftsmanship of old is back. Technically, this is the most impressive VR game I’ve ever played (thanks in part to the Valve Index I was playing it on). It’s an incredibly immersive experience.

It’s just one I didn’t really want to be immersed in right now.

Alyx has some of the most impressive VR wizardry I’ve ever seen. A lot of it is tied to your gravity gloves, which are both your virtual hands and user interface. You can also use these to pull items toward you. You just aim a hand in the objects general direction and flick your wrist to whip it toward you … and then you have to catch it. It makes something mundane, like picking up ammo off the ground, fun and interactive.

Gunfights are also exhilarating in VR. I was actually ducking and peeking behind cover, sometimes even dropping onto my knees (thank god I played in a carpeted room). This gives fights a kind of tension you can’t feel in a normal first-person experience. Small things also stand out, like medical stimpacks that you have to literally shoot into your chest or thigh and the grenades that you have to squeeze in your hand to activate. 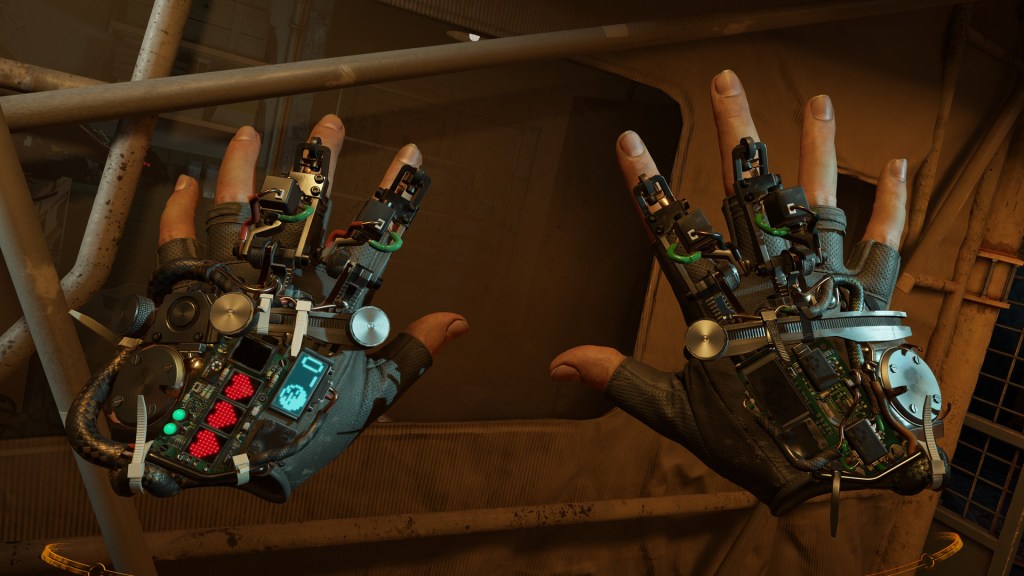 You have just a few guns in Half-Life: Alyx, but you can improve all of them with special stations throughout the game. For example, you can add a laser sight to your pistol, extra ammo storage for your assault rifle, or even a grenade launcher for your shotgun.

These upgrades cost resin, which are scattered around the game. And I do mean that they are scattered. You’ll be turning over buckets, looking into the rafters, and opening drawers trying to find as much resin as possible. It’s a great incentive to have you exploring every corner and nook of every room.

Puzzles are a big focus in Alyx. Sometimes you’re hacking into electronics by connecting nodes in a holographic display (which you can rotate with one hand). Others are based on your environment, like figuring out how to get power to an lift and then dislodge it from a a giant pipe stuck in its supports.

One sequence involves a nasty monster that will kill you as soon as it comes into contact with you. On the bright side, it’s blind. However, it can hear just fine. You can do things like throw bottles to distract it. The game has a lot of fun with this part, and it’s easily the highlight of the whole experience. Sometimes you’ll open a door and knock over a glass, only giving you a second to reach out and grab it before it crashes to the ground. You can even cover your mouth by moving your real hands up to your face. 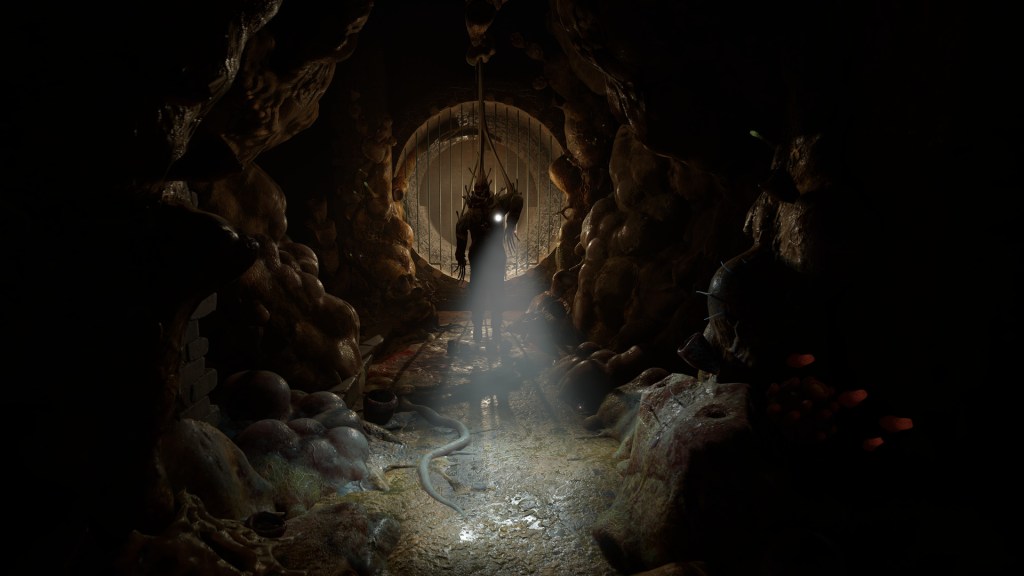 Going back to Half-Life

Half-Life 2 is one of my favorite games ever, so it’s great to finally be playing a new game in this series. Even small things, like seeing a headcrab again or hearing that iconic Half-Life healing sound effect, get me excited. And since it’s been so many years since the last Half-Life game, 2007’s Half-Life 2: Episode Two, the graphics and character animations have seen some big upgrades

Looking toward the future

I won’t spoil anything, but I was worried that Half-Life: Alyx being a prequel would mean that we wouldn’t see the series’ story move forward. This isn’t the case.

I almost feel bad holding this against the game, but now is a rough time to play something that immerses you into an intense, 10-hour long experience in a postapocalyptic world filled with monsters and lots of other things that want to kill you.

Compared to Half-Life 2, Alyx leans more into the survival-horror genre. Enemies hit harder, ammo is scarce, and health is limited. It’s not as fast or action-based as Half-Life 2. Now, this makes a lot of sense for the VR transition. Atmosphere is a big part of VR, and leaning more into horror elements is one way to create a more visceral experience.

But it can become mentally exhausting. I would play in sessions between one or two hours long, and I’d be straight up fatigued after them. Now, I suppose that means that the game is doing its job. But considering how stressed out I already am about being in shelter-in-place and practicing social distancing, I have to say that I’m envious of my friends who were spending all of their time catching virtual fish and paying off digital home loans.

And while the situation in the real world is obviously out of Valve’s control, the game isn’t doing itself any favors with levels that drag (there’s a part where you’re stuck in the same hotel for what felt like hours) and a limited color palette. And despite the length of the game, you often feel like you’re going through the same environments: dilapidated buildings, creepy underground areas, and abandoned streets. 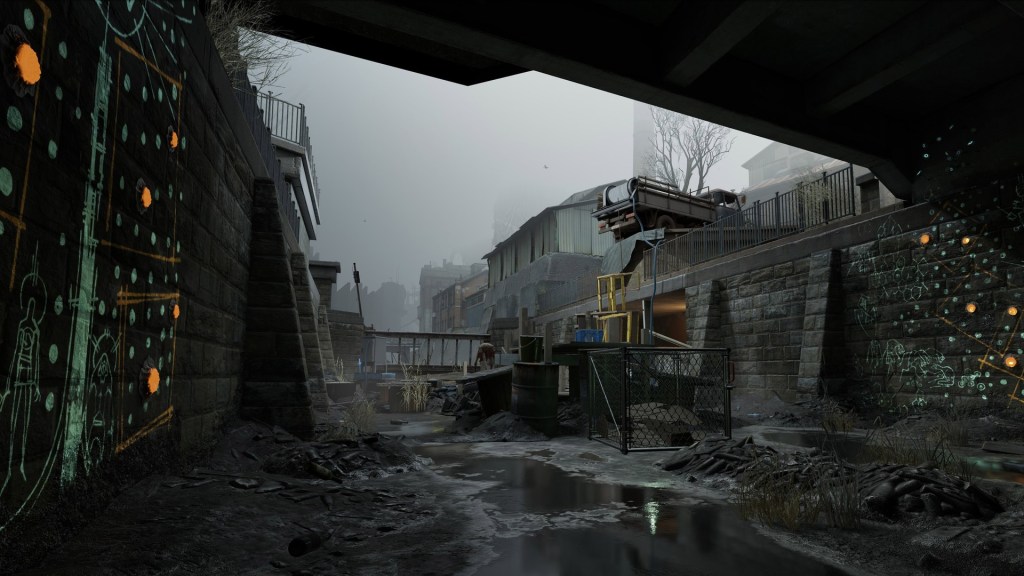 Half-Life: Alyx is often so immersive and impressive that it can be frustrating when the VR has its inevitable hiccups. One of my biggest problems involved the stickiness of grabbing and holding onto items. My hands would latch onto objects I wasn’t trying to grab, or I’d have a hard time getting my virtual fingers to let go of a door knob.

Then there’s the classic VR locomotion problem. You do have options to move around the game world in a normal manner, but these make me sick and disoriented almost immediately. Instead, I have to opt for the default traversal, which has you using short-range teleportation. It doesn’t make me nearly as queasy, but it isn’t all that immersive. This is a classic VR problem, and despite Alyx’s many amazing technical achievements, it doesn’t find the solution to this conundrum.

Half-Life: Alyx is one of the most immersive and impressive VR games out there. If you’re a fan of VR or of the Half-Life series, it’s an easy recommendation. But if you don’t want to play something this stressful at this particular moment, I wouldn’t blame you. This game makes Half-Life 2 look like a fun jot through Disneyland. Alyx ups the scares and the pressure with its focus on survival-horror.

That certainly makes Half-Life: Alyx the most intense entry in the franchise yet. But it isn’t as fun as Half-Life 2. That game had you feeling like a god, while Alyx will have you feeling like prey. Now, some of this comes down to personal preference. I’ve never been a big horror guy. But even with that aside, Alyx doesn’t quite have the variety or charm of Half-Life 2 or other Valve masterpieces like Portal 2.

But judged on its merits as a VR game, it excels. If you’re looking for something to wow you with what the technology can do, this will get that job done.

Half-Life: Alyx is out now for PC VR devices. Valve gave us a code for the game and a Valve Index headset for this review.