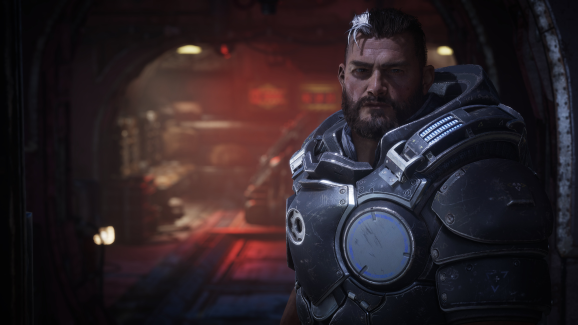 Gears Tactics is still about big boys in big battles.

Gears Tactics is a Gears game. That’s the impression I came away with after watching the developers play the turn-based tactical adventure for an hour earlier this week. But more than that, it looks like it might deliver some solid strategy action specifically because it’s pulling ideas from Gears of War.

Gears Tactics launches April 28 for $60 on Windows Store, Steam, and Xbox Game Pass for PC. And yes, it’s full tactics game similar to recent XCOM games. But I think the quicker/dirtier point of reference is Mario + Rabbids: Kingdom Battle. That’s because Ubisoft’s strategy game doesn’t rely on the Mario/Rabbid franchises for mere set dressing. Instead, the game’s designers used the various quirks of its source material to build systems that expand on the tactics gameplay. An example of that is jumping off of your teammates to extend your movement range.

Developers Splash Damage and The Coalition are channeling a very similar design ethos for Gears Tactics. And it could make for a tactics game that stands on its own, is rewarding, and keeps players coming back.

Let me explain what I mean.

Gears Tactics is a Gears game

At its core, Gears Tactics is a game where you take turns moving your characters and taking shots at enemies. It’s definitely going to look a lot like XCOM at a glance. But where it differs is in how it builds out synergies in a very Gears-like way.

Now, sure, this is Gears in that it has a very cinematic presentation. It also has main, named hero characters that are integral to the story. But while I don’t make games, I think those aspects are almost table stakes for establishing a Gears atmosphere.

But what really makes a tactics game click these days is when you use all of the bespoke systems to get the most out of your turn. In Mario + Rabbids that took the form of figuring out the past routing to run and jump your characters across the map for maximum damage.

In Gears Tactics, however, it’s about the familiar acts of using cover and up-close melee kills.

Gears of War established the pop-and-stop cover-based shooter genre. So it wouldn’t look like Gears if you just rushed past barriers that you would treat as critical in the traditional games. So to encourage that Gears-style movement, Tactics gives players a movement bonus for sticking against cover.

The result of this is a game that still looks correct, but it’s also one with a smart, built-in movement reward. And that’s the kind of thing that I adore as a tactics fan. I don’t want to feel like I’m just going through the motions to get to the end of the fight. Give me something clever to do on each turn to feel like I’m maximizing my efficiency. And it’s especially clever that Gears Tactics does this in a way that pulls from its source series.

It wouldn’t be Gears without some visceral melee kills

But while the cover movement is great from moment-to-moment, Gears Tactics also gives players something to work toward with melee kills.

Few things are more Gears than rushing in and chopping apart an enemy with the Lancer chainsaw gun. And, once again, Tactics encourages players to replicate that. Every time you do one of these melee-style kills with a character, all the other units on your squad will get a bonus action point.

This leads to situations where you are trying to dig yourself out of a hole by getting to that melee kill. So, first, you might need to clear out some units in overwatch or other enemies that might take opportunity swings if you get too close. This could leave you exposed except for if you can get in with a melee kill, get the bonus AP, and then wipe out the rest of the opponents.

And again, it’s so smart that the game built this very cool Tactics system on the skeleton of Gears.

Give me Gears Tactics

Getting the chance to watch a demo of Gears Tactics completely won me over. I’m very excited to play it for myself and dig deeper into these systems. The game has plenty more worth digging into like how the math works (it barely fudges anything), how much information you get (a lot), and how boss battles change things up.

But I’ll save all of that for a review or coverage after getting the chance to play Gears Tactics myself. For now, I’m impressed with how the designers built this game. It’s the exact right way to create a tactical spinoff of an existing property.

If you’re a Gears fan, I think Tactics has a strong chance of winning you over specifically because it is so damn Gears.