SupplyDrop is unveiling a service today that connects game studios that have too many developers with those who have too few during the ups and downs of the games development cycle.

Vienna, Austria-based SupplyDrop said it has created an intuitive matchmaking platform built specifically for video game development. SupplyDrop will be free of fees for the first several months, to gather feedback and to streamline the platform. Following the introductory period, SupplyDrop will implement updates along with a to-be-announced fee structure.

The idea is to empower games development studios to build better, stronger, and more stable teams. 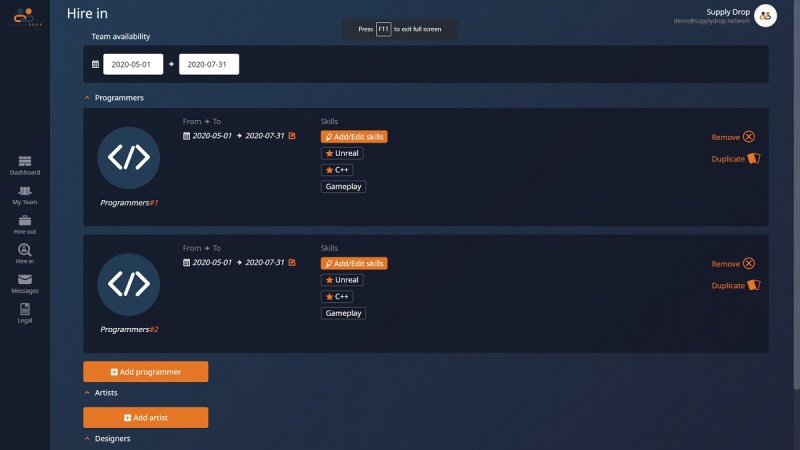 Above: Companies can list their excess employees and the ones they need as well with SupplyDrop.

Using SupplyDrop is easy, simply register your studio and team members, select the skills that they are an expert in and mark them as being available during a set time period. When a company searches for someone with skills matching the people you have marked during the same time range, your company will appear as a potential partner. If a match is made you then receive a message asking for further information.

Andrew Hance, founder of SupplyDrop, said in a statement that SupplyDrop came from the needs of running a small studio in Vienna and trying to find short-term work for the team to survive until the next project begins. With SupplyDrop, studios can match developers with companies that best fit their needs, he said.

Hance worked at Sproing for a number of years, doing a job in information technology. After that studio closed, Hance cofounded Purple Lamp Studios in Austria with Harald Riegler. Riegler left and Hance became CEO, and then started dealing with staffing issues that led to the inspiration to create SupplyDrop.

The company built the service for for times when studios don’t have enough projects on and have spare capacity, as well as times when they really need specialist expertise to get the project finished on time but can’t find it.