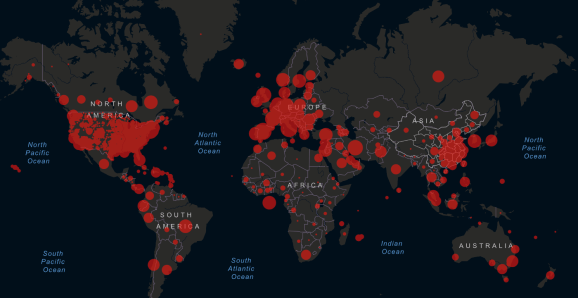 Folding@home software for donating compute to medical research passed 1 million downloads, director Greg Bowman said in a tweet today. The Folding@home Consortium is made up of 11 laboratories around the world studying the molecular structure of diseases like cancer, ALS, and influenza. Research into COVID-19 started earlier this month, and the crowdsourced effort is now powered by hundreds of thousands of Nvidia GPUs and tens of thousands of AMD GPUs.

There are now over 1M devices running @foldingathome ! This includes over 356K @nvidia GPUs, over 79K @AMD GPUs, and over 593K CPUs! Thanks to all our volunteers! We're planning more blog posts on our #COVID19 work/results this week, please stay tuned.

According to a Nvidia blog post about the milestone, nearly 400,000 gamers donated GPUs to the effort in recent days.

Last week, Folding@home said it crossed the 1 exaflop in compute power milestone, making it collectively larger than any supercomputer ever assembled. By comparison, the Summit supercomputer at Oak Ridge National Laboratory in Tennessee has repeatedly ranked first in Top500 supercomputing ranks and is able to muster 148 petaflops of compute power.

The compute is being used to simulate “potentially druggable protein targets” and understand how the virus that causes COVID-19 interacts with the ACE2 receptor, according to the Folding@home website.

“While we will rapidly release the simulation data sets for others to use or analyze, we aim to look for alternative conformations and hidden pockets within the most promising drug targets, which can only be seen in simulation and not in static X-ray structures,” organizer John Chodera said in a March 10 blog post to launch a series of protein folding projects into production.

In another recent initiative at the intersection of gaming and medical research, earlier this month the University of Washington introduced FoldIt, a puzzle to solve protein folding challenges. In work at the intersection of protein folding and AI, Google’s DeepMind released predictions of understudied proteins associated with SARS-CoV-2 generated by the latest version of AlphaFold.

A number of open source projects are underway to accelerate progress toward a cure. Cloud computing providers — like Alibaba, Baidu, and Tencent in China and AWS, Google Cloud, and Azure in the U.S. — are also lending compute to researchers. The CORD-19 data set is made up of tens of thousands of scholarly works and was made available last week for both medical and NLP researchers by a group that included Microsoft Research, the Allen AI Institute, and the White House.