Above: Hearthstone’s welcome bundle comes with a dragon legendary. Blizzard is experimenting with bundles now.

GamesBeat: For some time, your release tempo has been: Dungeon Run-based expansions, then adventure, and now back to another different type of single-player mode. Do you find, as you jump through these different single-player modes, do your monetization strategies change quarter-by-quarter, release-by-release, or is consistent with what you’re offering in single-player?

Lee: We’ve tried to hit the same price point. With Tombs of Terror we did a bit lower, because we wanted to make the last chapter free. It was this special boss encounter. It didn’t feel right charging extra for that. While it’s a cool fun encounter, it didn’t feel the same as a full chapter. That’s the only exception to that. We generally wanted that experience to be $20.

With the Dalaran Heist, we massively overprovided on value. If you add it up to get all the achievements and checkmarks, it’s around 1,000 hours of content. It’s huge. Even as a normal player, it’s hundreds of hours. You get a bunch of card packs and card backs and the Golden Zayle. We were super-happy with the value for money offering from that. Same with Tombs of Terror and with the latest Galakrond’s Awakening. Some players might see it as a paywall for cards, but the dollar value that you get in terms of cards, it’s one of the best value propositions you can have in Hearthstone. You get something like $50 or more worth of card value for $20, plus you get all the content. Generally we want to provide good value for money, and that’s why we’ve done the card pack changes as well. We want players to feel happy with what they’re purchasing, feel like they got good value for money.

GamesBeat: Have you found that with some people playing more Battlegrounds than Standard, that it’s hurting individual pack sales?

GamesBeat: When it comes to monetization, what is more important to the company right now? Monetizing off expansions or pack sales?

Lee: Not dodging the question, though I sound like it, but the most important thing to us is actually engagement. The reality is that if people are playing our game and enjoying it, they’re probably going to purchase something, and we want that thing to be something that’s fair and good to them, so they don’t feel like they regret purchasing. I think the key thing for us is we want to make cool expansions, make cool content. Going into the future with other game modes, one of the core things we want to do, and it’s really hard, is we want it to use your collection in a very positive way. You pay let’s say $80 for the preorder for the expansion, you can play the cards in Standard, and there are other game modes we release throughout the next year that will leverage your collection in a positive way. Not where you feel like, oh, I need to buy more cards. It’s more like, month one, you have Standard, month two you have something else that uses your cards in an inventive and fun way, the ones you already have. Above: I play Arena almost every day, and I feel like it’s an afterthought.

GamesBeat: When it comes to Arena, it’s starting to feel like an afterthought. Is this because it’s not monetizing anymore, or is it because it doesn’t have an internal champion at Blizzard?

Lee: Both of those things are not true. It does monetize. We have a very dedicated core player base for Arena. Vocally, people posting may not be happy about that, but we see in our data that a bunch of people are very happy playing Arena. Also, there are people on our design team who are very involved in the Arena work that happens. We tried some changes with bucket stuff in various different ways. The reality of that is that stuff’s really complicated and difficult to get right. It’s also very challenging to test. You need to do massive testing and figure out how all those decks work and how they generate. The core things that are missing from Arena — if Arena had a simple rating system like Battleground, it would add a huge amount to the game. It’s one thing we think about doing. We just have to weigh all the different costs of all the development stuff we’re doing. It’s something we may do at some time, but we also have other things we definitely need to do as well.

GamesBeat: Since Demon Hunter is coming to Arena, that means you’re not killing the  mode.

Lee: No! If we were going to do anything with Arena, it would probably — rather than kill it, we would reinvigorate and rework it in some way. There are a bunch of people — let’s say there is a core player base. This isn’t 10 or 15 people. It’s a large amount of people. There are millions of people playing Hearthstone every day, and Arena, off the top of my head I can’t remember a specific number, but it’s hundreds of thousands. It’s not our biggest game mode, but there are lots of — the reality is the number is a large amount. It’s not 10,000 or 5,000, it’s hundreds of thousands. It’s a huge amount of people, but that’s not close to the number of people that play Standard and so on.

(Season) pass plays and other strategies

GamesBeat: Have you given any serious thought to implementing a season pass or monthly pass for Hearthstone?

Lee: Yes. I think that the way that we — we’ve talked about it a bunch. There’s a bunch of positives, and also negatives. One of the negatives is you introduce a treadmill, the player promotions you need to complete it. If you don’t complete it, what we’ve seen in a lot of other games is people actually drop out. We don’t want Hearthstone to feel like a job, something you have to come to and fill this bar. We do have a plan to reward some progression right now, one of the things we detailed in the road map. That isn’t a battle pass or something, it’s more our own envisaging of a reward system. It’s not like, this month you need to do these things or you don’t get this stuff. It’s probably more of a permanent thing, where you can take your time and achieve things in your own way. That’s how we want people to play Hearthstone. We don’t want them to feel like they’re under pressure to do this thing in this way. You can do things your way in your own time and feel good about it.

GamesBeat: Other games are selling far more cosmetics than Hearthstone does. Have you thought about ramping this up?

Lee: Vanity is hard to do well in a card game. The biggest thing that we can do — some of the biggest things we can possibly do are heroes and card backs. We want to do those, and this past year we launched our thousand-win hero portraits. Those are kind of light hero skins compared to the ones that come with the prepurchases. I’m really happy with those. A lot of players are using them. Everyone has their own favorites. Some people don’t like certain artwork. That’s always going to be the feedback. But we see them being used a lot, which to us means that a lot of people care about them. I could definitely see us introducing more things in that vein, on that front.

In terms of a holistic huge cosmetic system, the reality for me, I worked on a game previously called Gwent, and we invested a lot into vanity and customization. Players, in reality, I think the choices — you can spend your money on card packs and get cards, or you can spend it on vanity. You’re probably going to get card packs.

GamesBeat: You’re doing something new when it comes with the mage bundle. Why did you decide to do class-specific cards as bundles, and why start with mage?

Lee: Mage is the first class that people play. It felt like a good jumping-off point for that. Also, we released Khadgar with it as well, so it just made sense. The class packs are something we’re really interested to see how people feel about them. We think it’s another way to make the game cheaper and more approachable for people. Not everyone, but a lot of players — the average classes played is about 2.3. Obviously that’s an average. Class packs are a great way to — if you’re super-invested in that class, those class packs are a great value for money deal to you. As a player, you have limited amounts of resources, and you have a choice. You can buy this 20-card pack bundle of cards that might give you nothing that’s useful to you, or you might choose this mage card pack, because you play mage and it’s your favorite class. Every card, with the card pack changes and no duplicates as well, in theory every card’s going to be useful for you. 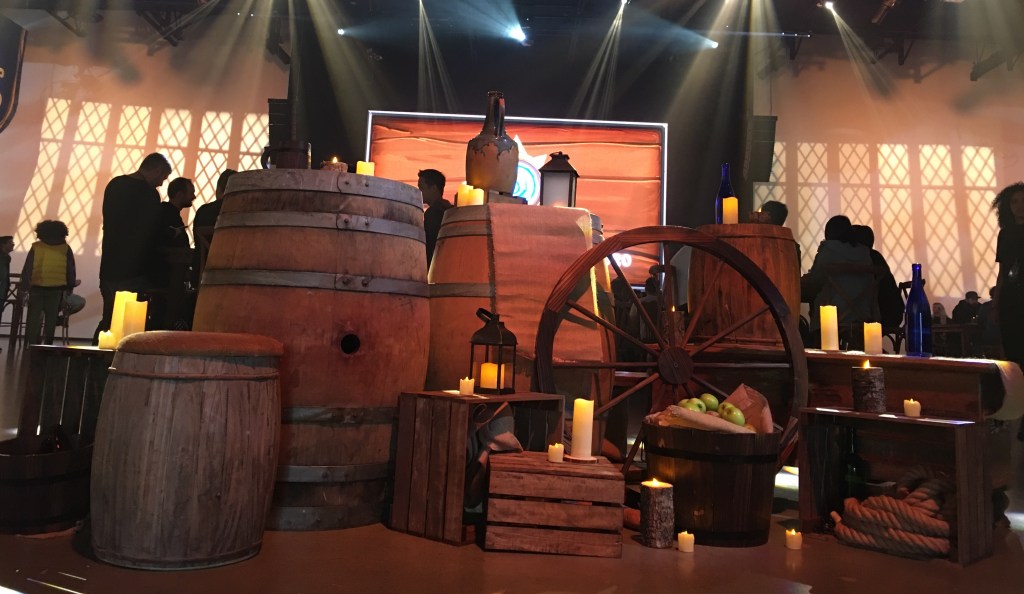 Above: Fortunately, Hearthstone’s tavern is almost always open in these times of essential business shutdowns.

GamesBeat: Was this change based on feedback from players, or was it just something you came up with internally?

Lee: My perception, from the conversations I’ve had — the way we’ve worked on some features is we have a kind of strike team that’s responsible for things. Battlegrounds, we pushed a lot of responsibility and decision-making down to the team. They worked really passionately on it, and they cared a lot about it, and that’s super awesome. We did the same thing with the new shop feature. It’s not as exciting a project to talk about as Battlegrounds, which is super-awesome amazing gameplay, but the team that worked on the shop had a really awesome job. We empowered them to think of, what products would you like to sell? What do you think would be good for players? One suggestion was class packs. That’s where it came from. Also, another thing that we wanted to do that we felt was important was giving the ability to get wild content from there as well, especially thinking about that future where that wild content is potentially something that could be relevant for a bunch of different game modes. It’s also just a bad player experience if you want to buy wild content. You’d go to the web shop and do it, and that’s not a good player experience.

Lyons-Smith: Class packs, to Ben’s point — it was totally, hey, strike team, come up with cool things you want to do. They identified a bunch of different types of packs they’d like. You’ve actually seen two of them now. Year of the Dragon packs, using this new pack to define what should be in this type of packs, give it more art assets and different content there. Mage packs are another one, and you can imagine we’re going to create different types of that. Add some variety and interest to what we’re offering to different types of players.