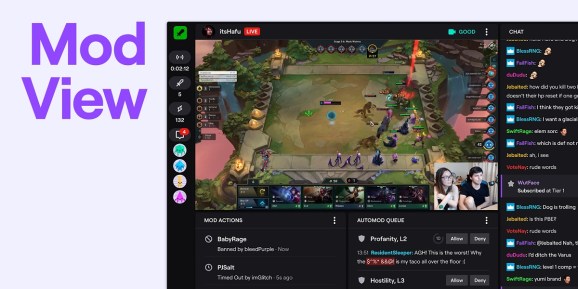 Mod View is for the community moderators who wear a lot of different hats, whether they’re welcoming new community members, hyping up the chat, or swinging the ban hammer on toxic fans.

Amazon’s Twitch division launched the new Mod View as part of its Mod Day celebrations. It is a highly customizable home for all of the tools moderators need to take action on their channels. Previously, mods completed tasks (keeping chat safe, timing out users, etc.) by typing commands in chat. Now, each task has a standalone widget that lets mods take action without distracting from chat or the video. Widgets can be moved and resized to suit the moderator’s most urgent needs.

There’s also a dock for other, less-pressing mod actions. Each docked widget shows quick preview stats like the number of active mods or the stream uptime. Click an icon for a preview, or click-and-drag to pull a widget out of the dock and onto the main grid.

Mod View has dedicated space for moderators to search for users in chat and to see certain pertinent details about them and their history on the channel.

Mod View’s new AutoMod Queue allows mods to easily approve or deny messages caught by AutoMod. An Active Mods view shows which mods are present and active, and Mod Actions show all actions taken by all mods on a channel to help them collaborate.

Mod View is a step in Twitch’s efforts to make moderating easier. Twitch said it will have future updates including new widgets and improvements to AutoMod.