Intel has launched its first laptop processors, the 10th Gen Core H-Series, that break the 5GHz barrier with speeds that range from 2.3GHz to 5.3GHz. It is targeting gamers and content creators — or those who both play games and upload videos to YouTube — at the same time.

The new Intel Core i9-10980HK processor is the high end of the family, with speeds ranging from 2.4GHz to 5.3GHz. It can run 16 threads across eight cores and is unlocked for overclocking. That’s pretty beastly for a mobile processor, and they’re Intel’s answer to Advanced Micro Devices’ Ryzen 4000 mobile processors.

But about 60% of the new family of processors can get above 5.0GHz at the maximum single-core turbo frequency setting, said Fredrik Hamberger, general manager for premium and gaming laptops at Intel, in a press briefing. AMD’s chips can reach as much as 4.4GHz.

“We’re super excited about this category,” Hamberger said. “And it’s also a category that, right now, when you look at everything that’s happening, it is so good to deliver relief for a lot of people so they can get online, play games, socialize, even if it’s at the right distance to keep it safe.”

He said that more than 30 thin-and-light laptops (many under 20 millimeters thick) are coming from manufacturers using this chip family, and there will be more than 100 laptops coming this year using this platform, starting with the first machines arriving around mid-April. 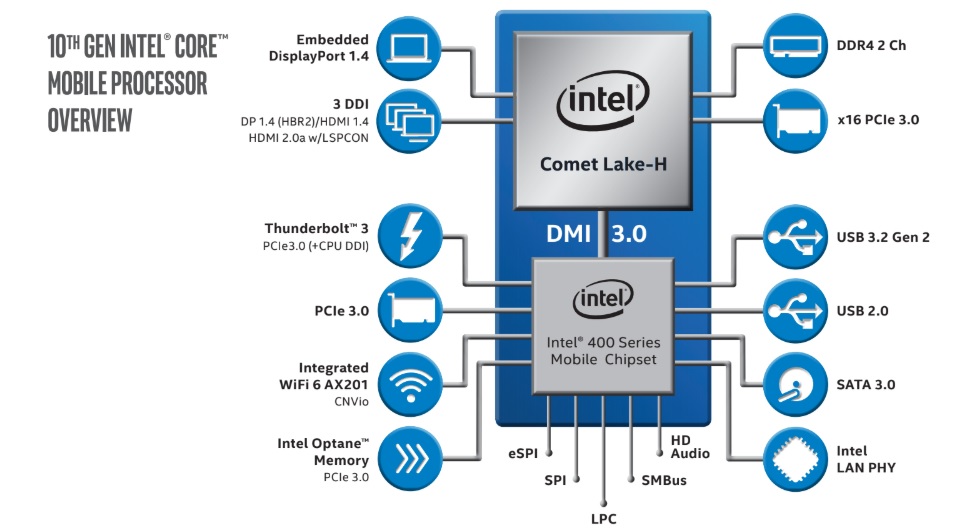 Above: Inside Intel’s latest H-Series processor.

“Fast gameplay gets the consumers into the store, but these are multipurpose devices,” Hamberger said. “The performance is 23% to 54% better on hardcore games versus a three-year-old laptop. Desktop-caliber performance is what we are looking at.”

Intel estimates there are 60 million content creators out there, and many of them use their laptops for video editing, streaming, and games. PC manufacturers who are launching new laptops include Acer, Asus, Dell, Gigabyte, HP, Lenovo, MSI, and Razer.

The new chips with power-saving features will debut inside two-in-one hybrid tablet-laptops, in laptops with thin-border displays, and gaming machines with 300Hz displays.

Intel Turbo Boost Max Technology 3.0 optimizes for lightly-threaded performance by identifying your processor’s fastest cores and directing your most critical workloads to them.

And the Intel Thermal Velocity Boost3 (Intel TVB) is a feature supported on all 10th Gen mobile H-series Intel Core i7, Intel Core i9, and Intel Xeon processors. It opportunistically and automatically increases clock frequency by up to 200 MHz if the processor temperature is 65 degrees centigrade or lower and turbo power budget is available. 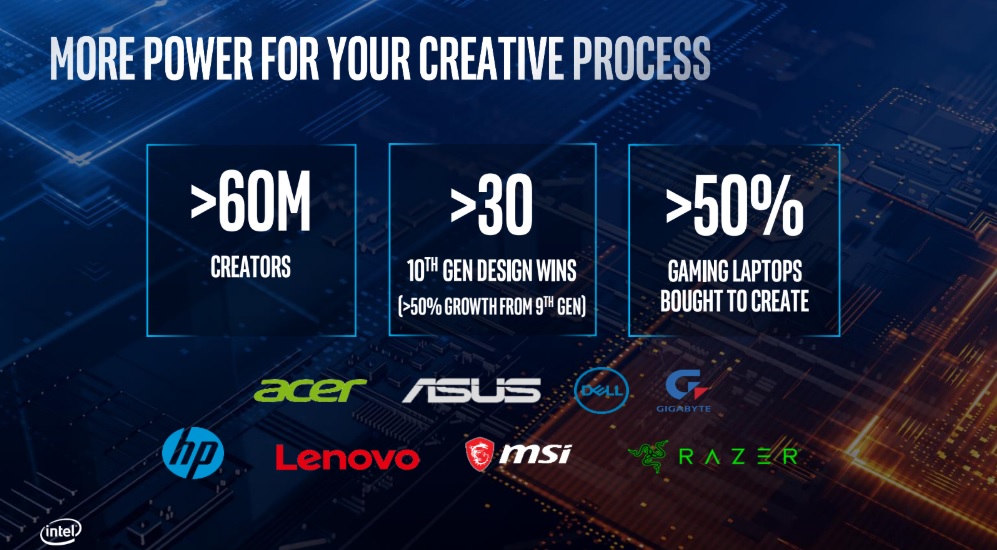 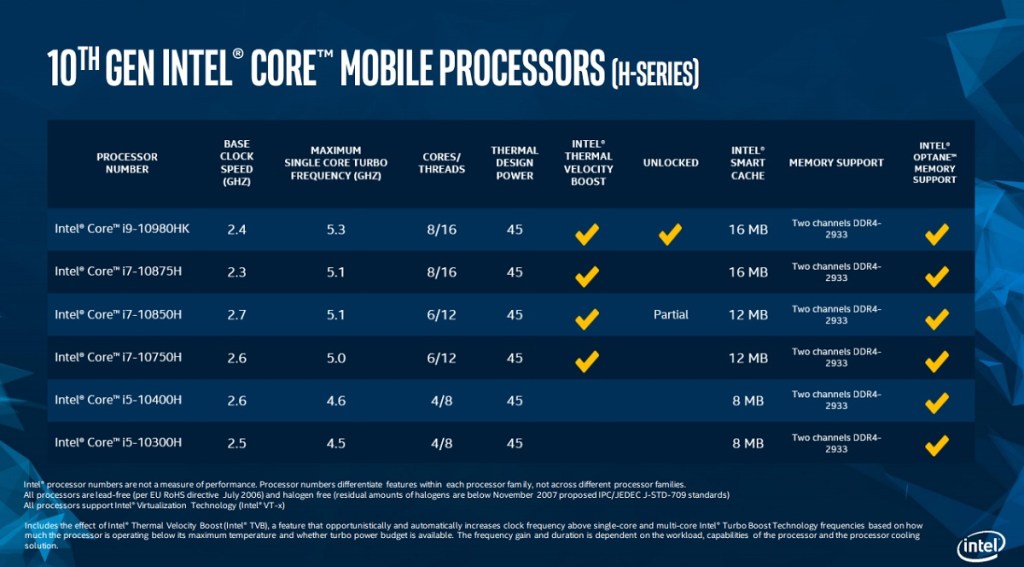 Intel said the processor is targeted for fast-twitch, high frames-per-second gameplay, even while recording and streaming. You can get faster downloads and smooth streaming with low latency and enhanced wireless security on the newly integrated Intel Wi-Fi 62 AX201 (Gig+) — so you can confidently ditch your ethernet cable and game wirelessly, the company said.

And systems with 10th Gen Intel Core processors can deliver fast photo editing and up to 8K video editing for demanding mobile power users. With HEVC 10-bit encode/decode, and VP9 10-bit decode, the chips can deliver smooth streaming of premium 4K UHD entertainment to your PC. And they can provide full-screen immersive viewing experiences with 4K video and 360-degree viewing. Laptops with the chips can hit around 20 hours of battery life for video playback, Hamberger said.

“On raw gaming, I am expecting Intel’s highest frequency part to benchmark very well,” said Patrick Moorhead, analyst at Moor Insights & Strategy, in an email. “On most other workloads, including gaming while streaming and content creation, I’m expecting AMD to benchmark better, but I’m waiting for third-party independent benchmarks to be sure. One advantage I think many are overlooking with Intel are the sheer number of designs the company has. The number of designs have always been directly related to sales.”