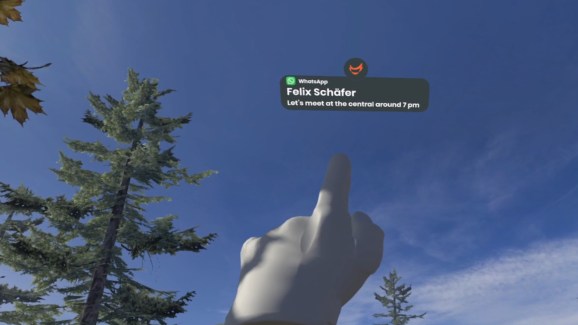 Holoswitch brings your smartphone notifications into VR. But does it break that immersion?

Tired of missing calls and important updates during marathon sessions of Half-Life: Alyx? Holoswitch might have a solution for you.

Launched in Early Access on SteamVR in late March, Holoswitch offers a pretty seamless way to keep track of messages in VR. Once you have it running on both a companion app (Android only for now) and on Steam, you’ll get virtual pop-up notifications whenever you get texts or app updates. Holoswitch is available now for $5.99. It looks like this:

Others have attempted this, of course, but I found Holoswitch’s take on pop-ups that were as noninvasive as possible to be pretty effective. A small bar will fade into view with a quiet blip to alert you to its arrival. It then fades back out, but an extension in your SteamVR menu lets you quickly see all the notifications currently sitting on your phone. It’s not just a good way to keep track of your phone but also for anyone in the room while you’re using VR to contact you without making you jump out of your skin. I could be lost in a game of The Elder Scrolls V: Skyrim VR and get a gentle reminder that maybe I’d been in there a little too long.

The app is in Early Access, and I did encounter a few blips. For example, it could take a while (and multiple attempts) to get the phone and the Steam app to link up, and the system seemed to have a harder time getting up and running on Oculus headsets rather than my Valve Index, where it was practically plug-and-play. Oddly enough, I also discovered it wouldn’t work in a game if I was also recording footage with OBS at the same time (I realize this is a hyper-specific issue). Developer Triple A Code says it will continue to work on blips like this, though.

Perhaps the most curious features for Holoswitch are promised for later, though. Triple A Code says the app will let you use your phone to store pictures you take in VR. There could be huge for more easily sharing content with your friends. Plus there will be integration with security apps so that you can access external cameras in your home to make sure no one’s stealing your TV from right under your nose.