After years of bad news, PC shipments saw growth in 2019. Now the coronavirus crisis is cutting the celebration short. The PC market fell between 9.8% and 12.3% in Q1 2020, according to research firms Gartner and IDC. Gartner’s numbers indicate the drop was the “sharpest decline since 2013, due to the COVID-19 outbreak,” while IDC said the “stark decline” was the result of “reduced supply due to the outbreak of COVID-19 in China, the world’s largest supplier of PCs.”

The PC market saw six years of quarterly PC shipment declines, followed by mixed quarters in 2018 and 2019. Last year was more good than bad: Q1 was negative, while Q2, Q3, and Q4 were positive.

2019’s gains were driven by the Windows 10 refresh cycle in the business market — Microsoft ended support for Windows 7 on January 14, 2020. The next potential drive force was expected to be 5G and dual-screen devices, but those are now unlikely to have any impact this year, given the economic climate. Businesses that were betting on such new technologies will have to adjust their roadmaps accordingly. 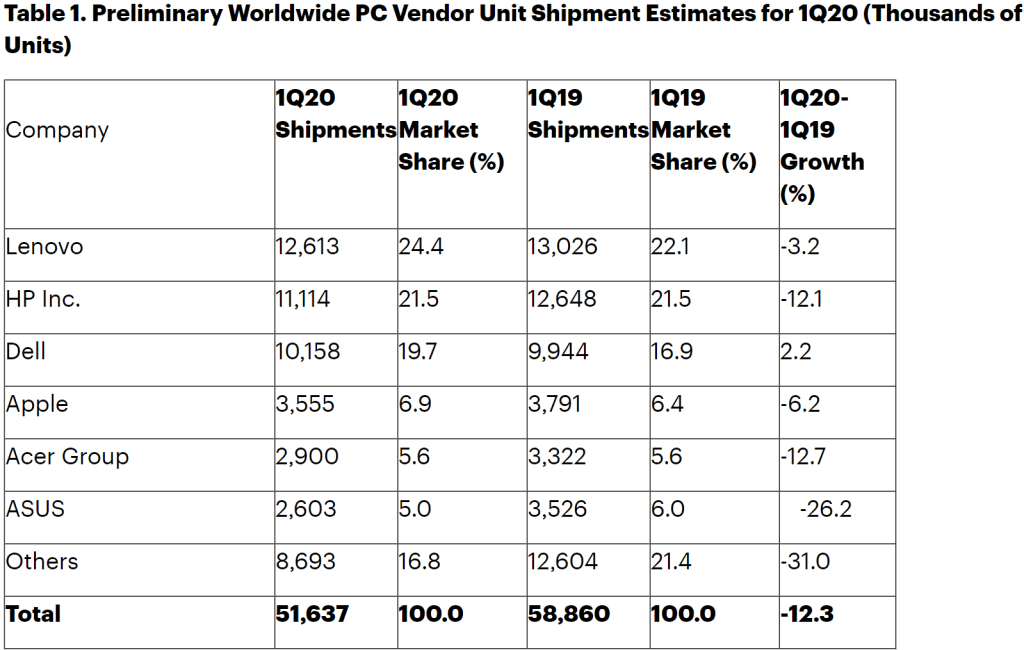 Lenovo and Apple saw single-digit declines, while HP and Acer were hit harder and Asus’ numbers were decimated. Last year, Dell’s growth was outpacing its bigger rivals, and now the company has closed the gap behind Lenovo and HP.

(Gartner also shares U.S.-specific figures and in Q3 2018 found that Microsoft had broken into the top 5 PC vendors. The company has held onto this position every quarter since. But that’s U.S.-only — Microsoft still doesn’t appear on worldwide charts.)

With the deadline to upgrade away from Windows 7 now behind us, there are still hundreds of millions of computers that need to get on Windows 10. With more uncertainty, businesses that dragged their feet before are now even less likely to upgrade. The delay will in turn send waves across the industry as fewer computers are purchased. Meanwhile, as the pie shrinks, the top PC makers will gain market share at the expense of smaller players.