Minecraft with RTX is finally launching this week. Microsoft and Nvidia are releasing Minecraft with RTX in beta for everyone April 16. This update adds ray-tracing effects like lighting, reflections, shadows, and more. And this is potentially the next generation for Minecraft visuals.

Real-time ray tracing is still one of the biggest buzzwords in computer graphics. Put simply, it is a process that replicates the behavior of light in a 3D space. It’s desirable because it can make an environment look more realistic. But it can also produce a lifelike image with a lot less effort from developers and artists. Nvidia and Microsoft began pushing this technology hard in 2018 with the RTX graphics cards and DirectX Raytracing, respectively.

Developers and publishers, however, are taking their time supporting ray tracing (although that will likely change once the next-gen consoles launch with baked-in ray-tracing hardware). But that’s where Minecraft with RTX comes in. Nvidia and Microsoft developed the game together, and they are finally ready to let everyone see it for themselves. You can get the game by opting into the beta for the Minecraft for Windows 10 version.

Of course, you might ask if it “just works,” then what took so long? And that’s a fair question. But for Minecraft, Nvidia and Microsoft couldn’t flip a switch. They needed to update the game with physically based materials. This enables the RTX light rays to correctly bounce off objects. A green block will add a green tint to any reflected light, for example. And water will bend light and reflect the world behind you in its surface. These sort of visuals are often too complicated for traditional lighting techniques.

Minecraft with RTX comes with a much-needed performance boost

Nvidia and Microsoft had to update Minecraft with physically based materials. The two companies also spent some time improving performance. The story with ray tracing up to this point is that it has a massive detrimental effect on performance. That’s also the case with Minecraft with RTX, according to Nvidia. While most modern systems can easily run the standard game at 144 frames per second or higher, Nvidia turned to its DLSS technology to achieve “playable framerates.”

DLSS is deep-learning super-sampling. It uses machine learning to determine what a game should look like at an ultra-high resolution. DLSS can then take that data and rebuild an image from significantly less visual information. This enables a game to run at 1080p while generating an image that looks nearly indistinguishable from native 4K.

To ensure that Minecraft with RTX is actually playable, Nvidia is bundling the update with DLSS. This gets you 40-to-60 frames per second in most circumstances. That’s up from about 25-to-35 frames per second without DLSS.

Is RTX worth it?

You can see ray tracing and DLSS at work in Minecraft for yourself this week. You’ll need to download one of the six free RTX-capable worlds from the Minecraft Marketplace. These include the physically based materials you need to see the lighting work appropriately.

I’ve spent some time in most of them, and I’ll share my impressions from that experience later this week. For now, however, let’s talk about if this is for you.

You will need an Nvidia RTX card to get anything close to a playable framerate from Minecraft with RTX. So take a look at the GPU in your computer. If it says RTX, you should give this a try.

One of the best things about ray tracing is that it’s not dependent on display technology. Unlike 4K and HDR, you don’t need to go out and buy a new monitor. Ray tracing is also noticeable in screenshots and videos, like this: 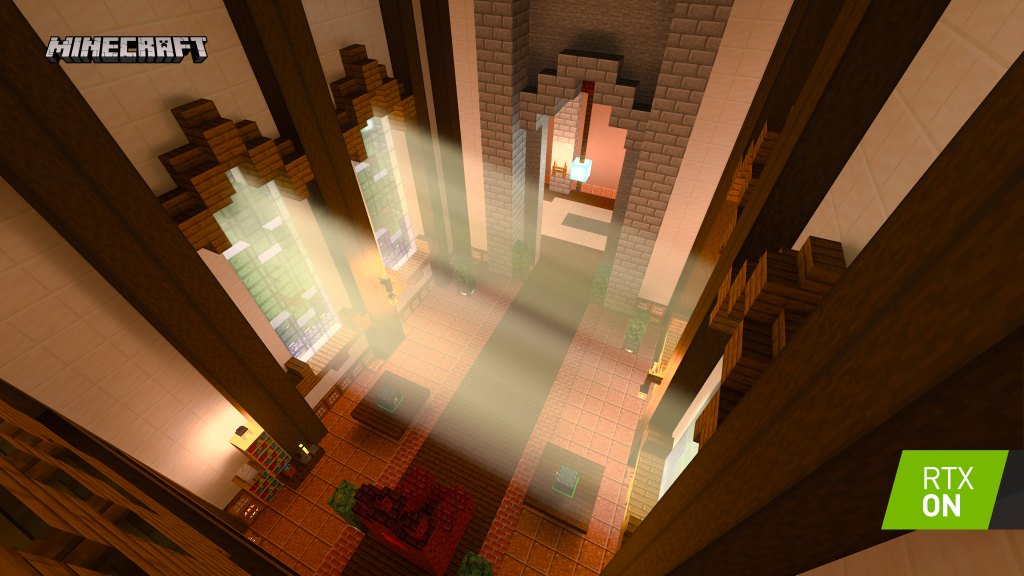 Above: Light beaming through a window in Minecraft with RTX.

You could run Minecraft with RTX on a CRT, and you would see the improvements of the ray tracing effects. Honestly, it would probably look even better on a CRT.

The big thing to keep in mind here is that you’re going to lose some frames. We are still on the cutting edge of real-time ray tracing. And it’s still astounding that Nvidia and Microsoft built a version of Minecraft that is calculating the reflections of countless individual rays of light more than 30 times every second.

The good news is that you can switch out of RTX mode at any time by hitting the “;” key. But you may never want to.