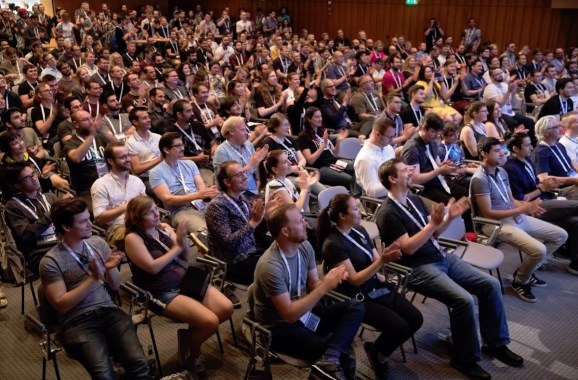 Yeah, this sort of thing is probably a bad idea in a COVID-19 world.

The German government is announcing today plans to prohibit large events through the end of August. This comes in addition to its personal lockdown, which it extended through May 3 earlier today. Chancellor Angela Merkel and local governors want to prevent COVID-19 from spreading at sporting events, concerts, and other festivals through the summer. These limitations should also cause Gamescom organizers to officially cancel or delay the massive gaming event. The Gamescom group was still planning to hold the gathering for August 25 through August 29.

Gamescom is one of the largest fan events for gaming on the planet. Each year, more than 370,000 people visit the expo in the German city of Cologne. This dwarfs American events like E3 and PAX, which attract 50,000-to-70,000 people.

But by any metric, Gamescom is a large event, and Germany’s current rules should prevent it from going ahead. I’ve reached out to organizers to ask for a confirmation about its plans. It did not respond to that request, but it did confirm the ban will disrupt Gamescom’s plans.

❗ Even though not all details are known at present, the nationwide ban on major events until the end of August will also affect the planning for #gamescom2020. Furthermore: gamescom 2020 will definitely take place digitally! We will provide further information shortly. ❗

On March 31, Gamescom organizers told partners and attendees that it was assessing the situation. It planned to re-evaluate the potential for the event to go forward in mid-May. But up until this point, the group was operating with the intention of holding a physical event at the end of August.

The government has seemingly taken that choice out of Gamescom’s hands. Now, the group must decide whether to postpone or cancel until 2021.

But in any event, a digital version of Gamescom 2020 will go ahead. Organizers revealed plans to expand its digital presence like with media events like the Opening Night Live show. The Game Awards creator Geoff Keighley also produces Opening Night Live, and that may help fill in the gap of the cancelled E3.

In the U.S., meanwhile, a GDC event is still on the calendar for August.

Updated at 4:30 p.m. PDT with tweet confirmation from Gamescom organizers.