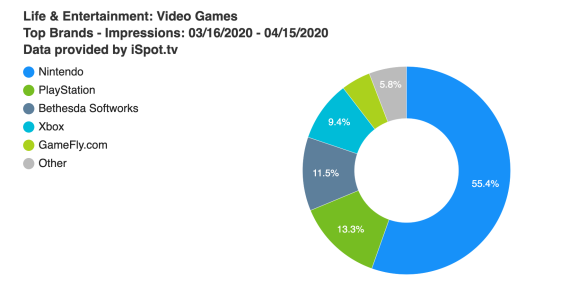 TV ad impressions nearly doubled for gaming brands from March 16 through April 15 compared to the previous 30-day period, suggesting that even as much of the U.S. economy slows down due to the coronavirus pandemic, gaming is a bright spot for Americans sheltering at home who are seeking out an escape from boredom. Nintendo — a longtime chart leader — is still on top with 55.4% of the industry’s impressions, but other brands such as PlayStation are gaining ground.

GamesBeat has partnered with iSpot.tv, the always-on TV ad measurement and attribution company, to bring you a monthly report on TV advertising by the gaming industry. These are the ads, and by extension the games, that game makers have been putting major muscle behind.

Below are the top five most-seen gaming industry TV advertisers from March 16 through April 15.

At No. 2: PlayStation, which ran two spots (both for the Final Fantasy VII Remake) 906 times, generating 171.2 million TV ad impressions. “A Touching Reunion” was its most-seen ad with 101.1 million impressions. Networks driving impressions included TBS, Comedy Central, and MTV, while three of the top shows were South Park, Ridiculousness, and The Big Bang Theory.

Third place goes to Bethesda Softworks with 147.5 million impressions generated by two spots for Doom Eternal that aired 559 times. The most-seen commercial (132.7 million impressions) was “Official Launch Trailer.” Comedy Central, AMC, and ESPN were some of the networks with high impression-counts, while top programming included Family Guy, South Park, and The Office.

GameFly rounds out the ranking with 58.9 million TV ad impressions generated by 785 airings of six commercials. The most-seen spot with 29.3 million impressions was “The Noon Train.” Comedy Central, Laff TV, and Cartoon Network were three networks with top impression-counts, while top programming included South Park, According to Jim, and The Fresh Prince of Bel-Air.