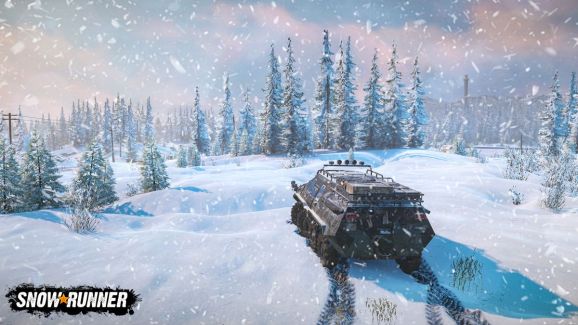 SnowRunner is out this week.

Video games exist so we can experience driving expensive cars at dangerous speeds. Or, at least, that’s what I always thought. But after playing Spintires (now known as MudRunner), I realized I have a lot more fun in games where I struggle to move a vehicle at all. I want a game that requires ingenuity and perseverance to barely move 50 feet. And that’s exactly what MudRunner, and now its sequel SnowRunner, provides.

SnowRunner launches April 28 for PC, PlayStation 4, and Xbox One for $50. Like its predecessor, the game is about navigating over unreliable terrain with the kinds of trucks that all toddlers are wild about. While MudRunner had a loose premise that boiled down to take this lumber from point A to point B and unlock more of the map along the way, SnowRunner tightens that up. You have more complicated missions, bonus quests, and even a hint of a story. But once again, the core of the game is about using a stable of big rigs to move resources across muddy and snowy lands. And that’s exactly what I want from SnowRunner.

I’ve played about 15 hours of SnowRunner on PC, but I’m still barely through the first of three main areas. While I feel like I have a firm grip on the overall structure and quality of the game, this is just a review-in-progress for now. I’ll update with final thoughts as I get through the game.

SnowRunner makes it fun to get stuck

My SnowRunner adventure began in a flooded rural Michigan town. A storm wiped out some roads and bridges, and it was up to me to get supplies to the people so they could rebuild. This takes place across a massive map, and it’s that scale that really forces players to make tough choices.

Soon after starting, I had built up a small garage of trucks. I had a couple of light scout vehicles, but I also found a large rig built for the highway and one better suited for off-road work that’s about the same size.

Now, at any time I can recall any one of these trucks to my garage, but that means if you have an objective on the other side of the map, you’re going to have to drive all that way. And getting anywhere in SnowRunner is a challenge. So when I ended up taking on a mission that was right near my highway rig, I decided to use that to complete the quest.

That was an error.

I knew it was a mistake when I drove the GMC truck up to what were once some dirt roads … but were now a series of small ponds. I faced a choice: I could go get the other truck, or I could take my chances. It’s not that simple, of course. Getting the other truck means driving it across the map to pick up the food supplies again and abandoning all the progress I’ve already made. And while that probably would save me time in the end, I instead drove the GMC into the mud.

I didn’t get 20 feet before the truck stopped moving. It’s made for the highway, so it doesn’t have all-wheel drive or anything to deal with such terrain. Getting stuck was inevitable.

And while that sounds frustrating, it’s not. It’s exciting. I immediately began thinking of ways to get my truck moving again. At first, I found a few trees for my winch, but my load was so heavy that I ended up bending the trees in half. So instead, I got into my Chevy, drove it down to the mud patch, and started the laborious process of dragging the big vehicle out of the muck.

Thirty minutes later, I’d finally dragged both trucks back onto something you could call a road. That victory was so satisfying.

SnowRunner is a game about finding a way to pull yourself through situations that a kinder game would treat as a fail state.

It builds design on top of impressive technology

I first learned about Spintires through a GIF that showed a truck tire leaving a realistic trail through deep mud. And that’s still the keystone in Snowrunner. Moving these trucks through these spaces is so rewarding because players can bring their own real-world experience to the game. Tires digging into the ground looks right, but it also feels right as a driver.

So your mud tracks aren’t just cosmetic. If you run a big rig through a wet section of the road, you’re going to leave deep ruts. And if you take the same path again, it’s more likely that your tires will sink deeper and end up getting stuck.

It’s that level of detail that makes everything else in SnowRunner come together.

SnowRunner has more to do and explore

SnowRunner is also a significant improvement over MudRunner in terms of variety and progression. The scale of the map makes exploration more important, but Saber Interactive also filled the world with more to collect and do. I’ve spent hours driving my scout vehicles around the Michigan map alone, and I still haven’t uncovered the entire map.

Along the way, I’ve discovered hill-climbing and speed challenges. I’ve also found upgrades to customize my vehicles as well as new missions.

Speaking of upgrades, each truck has a list of items that you can purchase with in-game currency or unlock through gameplay. And I’ve found myself spending time between each objective driving to unexplored areas in an attempt to find new engines or suspensions for my vehicles.

Overall, the pacing is better in SnowRunner than in MudRunner because you can avoid repetition.

Upgrading trucks may spoil some of the fun

But while upgrading is fun and adds to the feeling of progression in SnowRunner, I’m worried about it. One of the things I want from SnowRunner is for it to put me into tough positions. I want to overcome tough situations with limited resources. And I think offering the option to upgrade vehicles with off-road tires, powerful motors, and more could upset that balance.

Now, when I find myself getting stuck in the mud, I begin thinking about improvements I could make to my trucks so overcoming the terrain is easier. And I would prefer the game give me a selection of trucks and then force me to figure out a solution.

I just don’t want to grind through these problems with in-game progression. And right now, I think that’s what I’m experiencing.

SnowRunner is all I want to play right now. It’s so rewarding to carefully drive a truck around a fallen branch on a wet road or to find a path up a hill. And to me, this is what gaming does best. You won’t find any cutscenes or motion captured performances. It’s about our relationship to machines and the physical world in the same way that jazz is about our relationship to sound.

I feel lucky that this franchise got another entry and is going to continue to live on. It deserves it.

SnowRunner is out April 28 for PC, Xbox One, and PlayStation 4. Focus Home Interactive provided GamesBeat with a download code for the purpose of this review.