Analysts had expected Microsoft to earn $33.7 billion in revenue and report earnings per share of $1.26. The company thus easily beat expectations. Eyes are on Microsoft during the coronavirus pandemic, given its prominent role in the software and cloud industries. And so far, so good: “COVID-19 had minimal net impact on the total company revenue,” Microsoft said. Unlike tech giants Google and Facebook, Microsoft doesn’t generate the majority of its revenue from advertising and thus might not feel the impact of the coronavirus crisis as deeply. The company’s stock was up 4% in regular trading and up another 3% in after-hours trading. Microsoft returned $9.9 billion to shareholders in the form of share repurchases and dividends during the quarter.

“We’ve seen two years’ worth of digital transformation in two months,” Microsoft CEO Satya Nadella said in a statement. “From remote teamwork and learning to sales and customer service to critical cloud infrastructure and security — we are working alongside customers every day to help them adapt and stay open for business in a world of remote everything. Our durable business model, diversified portfolio, and differentiated technology stack position us well for what’s ahead.”

Microsoft’s release noted that “cloud usage increased, particularly in Microsoft 365, including Teams, Azure, Windows Virtual Desktop, advanced security solutions, and Power Platform, as customers shifted to work and learn from home.” More cloud usage but slower revenue growth might suggest Microsoft is willing to delay or waive bills and fees for Azure customers in hopes of keeping them loyal in the long run. Microsoft does not break out exact Azure revenue numbers, likely to avoid comparisons with industry leader AWS. 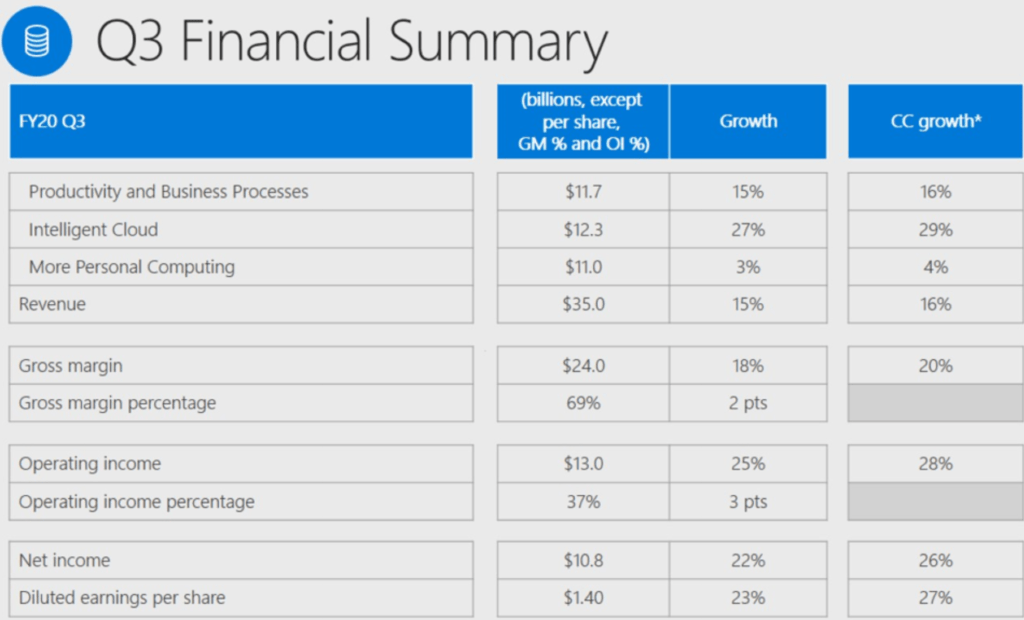 Microsoft Office continues to be a cash cow for the company, with the pivot to an Office 365 subscription business largely deemed a success. Having nearly 40 million consumer subscribers of Office 365 is significant, but it still pales in comparison to the enterprise side. In Q3 2020, Microsoft passed 258 million paid Office 365 business seats (up from 200 million) and 75 million daily active users for Teams.

The story with Windows is probably the most notable. Whatever number of computers consumers bought earlier this year was negated by an overall PC shipment decline for the quarter. Commercial Windows revenue was likely saved by Microsoft ending support for Windows 7 on January 14, 2020. Before the pandemic hit, many businesses were likely still upgrading. Q4 2020 will be brutal for Windows revenue. “The effects of COVID-19 may not be fully reflected in the financial results until future periods,” Microsoft wrote in its release.

Office and Windows aside, Microsoft continues to see dividends from its LinkedIn acquisition, which closed in December 2016. The company has seen double-digit growth for LinkedIn ever since. But there was a warning in Microsoft’s release: “In the final weeks of the quarter, there was a slowdown in transactional licensing, particularly in small and medium businesses, and a reduction in advertising spend in LinkedIn.”

Surface continues to bring in $1 billion each quarter. Q1 is typically the company’s worst quarter for Surface, while Q2 is the best. Q1 2020 and Q2 2020 followed that pattern. Q3 2020 was flat, which looks like good news for Microsoft, given that PC shipments were down overall. In October, Microsoft held its annual hardware event, where it refreshed its lineup with the Surface Laptop 3, Surface Pro 7, Surface Pro X, and Surface Earbuds in time for the holiday season. Q3 2020 was the first full quarter of sales for these devices, and they seemed to survive. Next month, Microsoft is expected to announce the Surface Book 3 and Surface Go 2. The company will have to market them heavily in this economic climate.

For gaming, Q1 2020 and Q2 2020 were disappointments for Microsoft. Q3 2020 was a little better. Xbox content and services revenue increased 2%, and gaming revenue as a whole declined 1%. Microsoft stopped breaking out Xbox Live monthly active users a few quarters ago. But given that games are performing well during the pandemic, the company brought it back. On the earnings call, Microsoft shared that Xbox Live now has nearly 90 million monthly active users, Xbox Game Pass has more than 10 million subscribers, and Project xCloud has hundreds of thousands of active users in preview across seven countries.