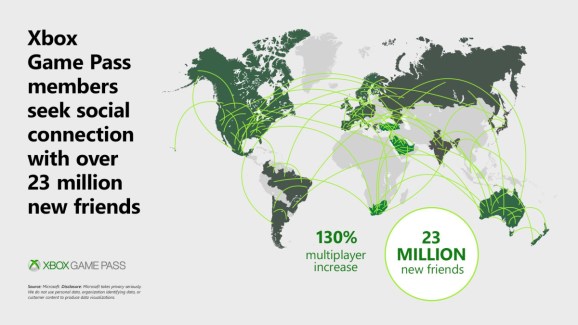 Xbox Game Pass doesn’t have Friends, but it does have the friends we’ve made along the way. And that’s not just a silly phrase by a very clever reporter (don’t laugh). It’s one of the most powerful elements behind the success of Microsoft’s subscription service.

When analysts and investors compare Game Pass to other services like Netflix, it’s tempting to look at the latter’s strengths as the former’s weaknesses. Millions of people subscribe to Netflix to watch the same popular older shows, like The Office and Friends, over and over. Gaming doesn’t usually work the same way. People typically want newer games they’ve never tried before.

But while that is a potential issue for gaming subscriptions (although games like Minecraft provide evidence that it isn’t), Game Pass has a different strength. Video games are much more social, and the network effect between friends could lead people to come back month after month.

And now, Microsoft is confirming that is exactly what it’s seeing on the platform.

“Since March, Xbox Game Pass members have added over 23 million friends on Xbox Live, which is a 70% growth in friendship rate,” Xbox boss Phil Spencer wrote in a blog post this morning. “Game Pass members are also playing twice as much and engaging in more multiplayer gaming, which has increased by 130%.”

The explanation for this network effect is simple. Groups of friends are more likely to play games together if they all have Game Pass. And the service is affordable enough that most people see it as a worthwhile expense. Most gamers are happy to pay $5-to-$15 per month if it means they don’t get left out of the regular game night with the crew.

Think about what a new Game Pass launch means socially. Unlike when a game hits for $60, you know that all your Game Pass-subscribing friends have it as well. You don’t need to convince your friend to spend $60 on a game they aren’t sure they will like.

When you have less pressure and awkward feelings about bringing up money, it’s easier to shoot an invite over to your bud.

Again, Spencer says the company is seeing that behavior play out in the data.

“Xbox Game Pass is empowering players and their friends to branch out and discover new games they might not have played before,” he said. “We know this because after joining Game Pass people play 40% more games and more than 90% of members have played a game they wouldn’t have tried without Game Pass – often discovering new genres they have not yet experienced.”

This also brings those friends closer together. So when a new $60 game does launch, those groups are more likely to give it a shot to keep playing together.

And in a time when people have few options for socializing, Xbox Game Pass is providing a valuable means for connection.

This should give Microsoft momentum as it moves into the next generation with Xbox Series X. The company plans to begin revealing games for that system on May 7.