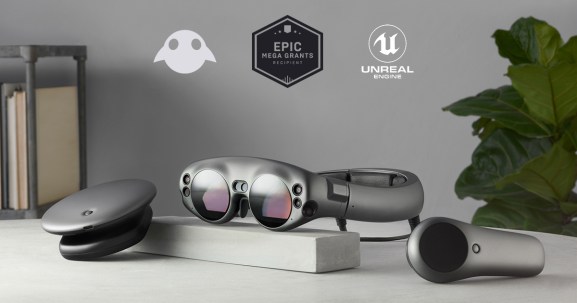 Epic is partnering with Magic Leap to give away some of its AR headsets.

Magic Leap sent owners of its AR headsets a warning that they need to update their devices due to an issue related to the battery.

Developers received the email Tuesday, April 28, less than a full week after massive layoffs on April 22 left the organization a fraction of its former size. The email to developers warns of a “critical” update to the software on the device because in “extremely isolated incidents” the battery contained in the processing pack for the AR headset “may expand or swell … when plugged into a charger continuously for an extended period of time.” The processor pack, called a “Lightpack”, is worn on the body during use.

There’s also a website posted about the “Critical OS Update for Magic Leap One Creator Edition and Magic Leap 1” which explains that the software update will “minimize the likelihood of swelling” by activating a “Battery Saver Mode” when it is “connected to a charger for extended periods of time.” The company also suggests owners of the headset “to examine the bottom of your Lightpack to determine if the black silicone cover shows any signs of the battery inside of the Lightpack swelling (such as if you see the edge of the black silicone beginning to lift away or any sort of deformation on the bottom).”

The company says those affected can receive a “replacement device, free of charge.” I asked Magic Leap representatives if there’s a fire risk associated with the battery swelling issue and they told me there’s “no evidence that there’s a fire risk.”

Magic Leap raised more than $2 billion for its AR efforts over the years but reportedly only sold 6,000 units of its first headset in the first six months.