If you have gamers in your household, chances are one is playing Call of Duty: Warzone. The new battle royale mode for Call of Duty: Modern Warfare multiplayer arrived on March 10 just in time for the lockdown in the United States and elsewhere. And it’s become my game of choice to take my mind off the pandemic.

In its first month, the free-to-play game was downloaded more than 50 million times, or the same number that Electronic Arts and Respawn saw with the debut of Apex Legends last year. In this case, social distancing and self-isolation contributed to Warzone’s success. It has come to the attention of a wider group, particularly with parents or other household members who discover their gamer is obsessed.

Like Fortnite, Warzone has penetrated into the mainstream. Saturday Night Live aired a segment on Warzone, which you can see below. In the episode, a Twitch streamer plays Warzone and gets killed immediately every time he spawns. That can happen, as a lot of players are quite skilled. (I even got killed once while parachuting into the battlefield — by another parachutist). But the trouble with the Saturday Night Live skit was that the map was from Modern Warfare multiplayer. It wasn’t from Warzone itself. Anybody who has played Warzone or Modern Warfare multiplayer would know that, and so it’s another case of mainstream entertainment trying to grok gaming and failing.

Still, the nod to a hardcore game on a show for everybody signals that gaming is gaining traction around the world, and Warzone is one of the games at the forefront of that offensive. In this story, I hope to explain why this game is so fun and popular during the pandemic.

It’s a compelling game, but it’s not easy to win. One-hundred-fifty players compete in a fight to the finish. You can play solo, or join teams of three or four squadmates. But only one team comes out as the winner as a shrinking circle forces everyone together on the battleground.

I have been obsessed with Warzone, as it took me a long time to get my first win — just yesterday. I came in second place four times, and it was just killing me that I didn’t yet have a victory. I widened my circle of friends and found people who were good at Warzone, and that helped improve my chances of getting a win. But mostly, I just needed to play a lot in order to beat the laws of probability.

I have played 147 games in Warzone. As I said, I have won one match, and I have come in the top 10 teams 32 times. I have 243 kills in those games. I’ve downed another 202 players (if you down someone, a squadmate can resuscitate the player). I have a career rank of 153 in both multiplayer and Warzone, and I am currently ranked at level 96 in the current Battle Pass Season 3 for Warzone.

I have spent 48 hours and 28 minutes playing all those games. That’s not a lot of time as far as hardcore gamers go. One of my friends has 10 victories across more than 600 games. But then again, I’ve had a busy day job during the pandemic. I had to spend a lot of my recent time preparing for our GamesBeat Summit 2020 event, which took place last week.

How hardcore do you have to be? 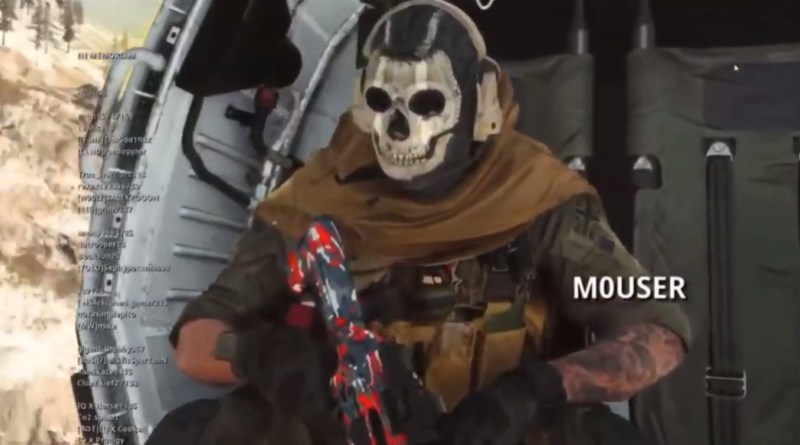 Above: Mark Chandler helped us get our first win in Warzone.

I am playing on the PC. For a long while, the game kept crashing after I finished matches. But lately, it’s been quite stable. Every now and then, it suffers from lag, which is an indication of how it can bring the internet to its knees. I am more than happy to put up with this, given the fact that a lot of other thrilling entertainment isn’t available now.

I am sure that some people are wondering if I’m actually good at this game, given my history. No, not really. I am quite mediocre. However, I enjoy it. It’s immensely fun, and that’s what matters to me. You may be intimidated by it at first, but if you tell your squadmates it’s your first game they will likely be very helpful (if they’re playing with microphones).

Every year, I play Call of Duty and usually level up to the top level in multiplayer. I had done that in last fall’s Call of Duty: Modern Warfare, and I was delighted to learn that when you collect your cash in Warzone and then spend it to buy a loadout, you can get access to your Modern Warfare multiplayer loadout. That was a brilliant reward for people who spent a lot of time in multiplayer leveling up their weapons.

When I get hold of my loadout (either by purchasing it at a buy station inside the game or when it randomly drops from the sky), I can stand my ground. I use a leveled up light machinegun (LMG) and an assault rifle, and I play with an Xbox game controller. That puts me at a disadvantage to players who can target better with a mouse and keyboard. But I find it’s the only way I can move and shoot well at the same time. With a full loadout, your gun is much more stable and it has a leveled up sight, which helps with precision aiming.

The other thing that is great about Warzone’s design for noobs (new players) is the Gulag. If you get killed for the first time, you have a chance to come back. You have to go to a prison and have another 1-on-1 fight with another player. If your squadmate is also in the Gulag with you, they can watch from above and tell you verbally which way to go to head off the enemy.

The net outcome is that Warzone is both engaging and team-oriented. It gives you a reason to stay and root for your team, even after you die. You can spectate them while you’re waiting to be repurchased, and you can give them advice. It’s a little design change that makes players more social. While you have to be a hardcore player to get good at the gameplay, the social side of it is more inviting for the folks who want to just have a good time.

Communication is the key 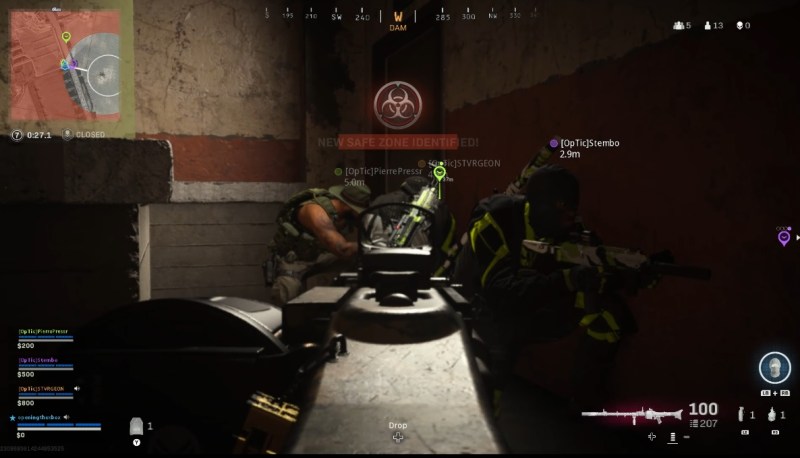 Above: Stembo, stvrgeon, and PierrePressure stack up on a door as we prepare to exit onto the dam.

But the best thing isn’t just playing with familiar weapons. It’s that the game is extremely social.

In the name of team survival, you are motivated to talk. You have to tell each other where you’re going, to come back if they are straying, where the enemies are, or that you’re reloading. You do this with non-verbal cues, like double-clicking on an enemy far away to point them out to your squadmates, or with audio chat on an open mic. You can easily mark a spot on the map where you want the team to go next. That’s an innovation introduced by Apex Legends.

I strongly believe that this communication system is what makes this game so popular. When I’m hanging out in the lobby or warming up, I get to have conversations with folks like Mark Chandler or Sean Hollister and see how they’re doing. In this pandemic, that’s a blessing. It’s fun to goof off with friends; I often try to grab a helicopter and chop up other players with the blades. (See the video below).

“The amount of ingenuity among our players never fails to amaze me,” said Taylor Kurosaki, a narrative designer for Infinity Ward, in an interview with me. “The way that they can take the toolset that you give them, the playground that you give them, and then use it in ways you never imagined is remarkable.”

On Thursday, Peter Levin of Griffin Gaming Partners hooked me up with his team, which included some extremely talented folks: Stembo, stvrgeon, and PierrePressure. They all tried to get me my win when they heard I hadn’t won yet. Most of the time, I felt it was an escort mission where these guys were taking down so many other players and I was the VIP they had to protect.

I was amazed at how good these players were at sniping. In fact, if you want to get good at Warzone, you really should get a lot more comfortable with sniping, perhaps by training in multiplayer matches. Other skills like being able to fly a helicopter or drive a car will also earn you points with your squad. But the whole point of a squad is that you should have diverse skills. My skill is being a heavy gunner.

The expert squad was also good at tactics, like anticipating how to get to high ground first, or to outflank an enemy who has one player pinned.

They also spoke to each other on phones via Discord, as the audio clarity is much better on that gamer social network than the in-game audio, which may slow down the game. They chattered a lot about where the enemies were, marking the foes quickly with a single click of a mouse or tap on a controller. It gave me better insight on how a team that communicates can do much better. Quite often, on other teams, one of our squad will start shooting at someone without telling us where the enemy is. That wastes precious time.

In one of the games, we almost won (we came in third). And it was ironically right at the same point near the dam where I would later win a match. But in the match with Stembo, stvrgeon, and PierrePressure, we got squeezed off the dam. Because of that circle squeeze, I was the last survivor. I was hanging back and took out two players, but the gas finally got me. If I had jumped over the dam wall, I would have had a chance to play on, but I would have also been taken out by another team sitting on an island in an ice lake.

When I actually won a match in a game with Mark Chandler and two strangers, it was in almost the exact same location, except the other teams were the ones getting squeezed by the gas circle and we were the ones on the island. The closing gas forced them to run at us over the unprotected ice lake, and they were easy to pick off. We won because, during our communication, we chose correctly where the final circle would be, and that made all the difference in having the final advantage.