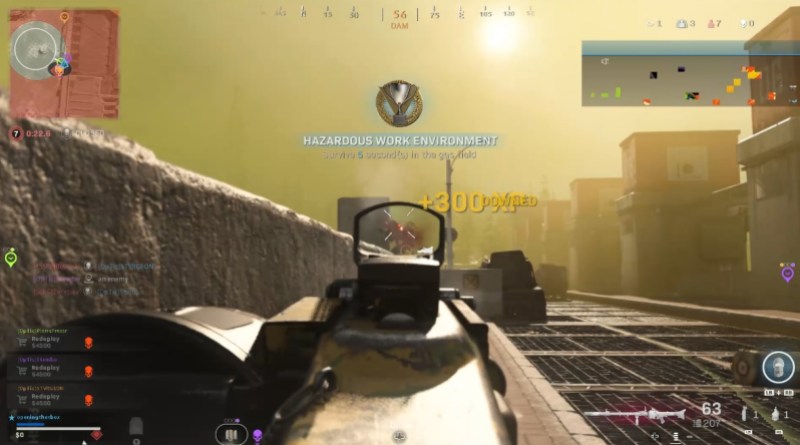 Above: Getting a last kill before the gas circle killed me.

In a tough puzzle for Activision and studio Infinity Ward, many players may never spend real money. But the theory with free-to-play games is that a small percentage of players will spend real money on Call of Duty Points to customize their character, weapons, and other stuff. And that makes up for the folks who only bought the game itself and are too cheap to spend money on in-game items in Warzone.

You can spend money on Call of Duty Points to buy things like a Battle Pass. You can also use the points to get perks and attachments for select weapons. We’ll find out soon enough when Activision Blizzard reports earnings on Tuesday whether they’ll say anything about making a lot of money on Warzone.

Last week, Infinity Ward released a new update that changed a number of things. It’s harder to find cash on the ground, and that makes it harder to buy loadouts or purchase your comrades back from limbo after they die. It also adds things like a contract dubbed Most Wanted where everybody tries to chase down one player. If the player survives, they get a lot of cash.

You can also carry a satchel with as many as eight armor plates, and those come in handy because they can stop a bullet that would otherwise bring you down. The circle also doesn’t move as fast in later rounds, so you’re able to outrun it better. These updates show that Infinity Ward continues to invest heavily in the game because it’s so popular.

It’s good to see the frequent updates, including new story material, as it shows that the developers are responding to player feedback, as Kurosaki told me. It keeps players engaged, and engaged players may eventually spend money. 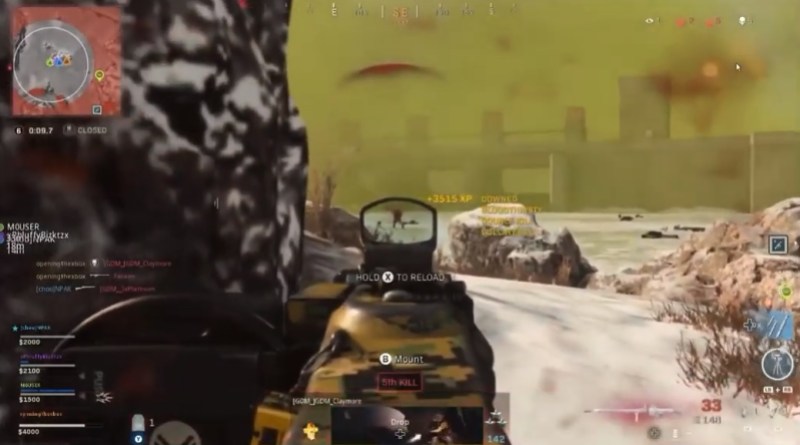 Above: My trusty LMG came in handy in my first victory.

I’ve mentioned how squad communication is key to victory (yeah, I’m barely an expert on that), but here are other tips for survival.

So far, we only have one massive map with some familiar locations. You can come to memorize it and where the good loot is. When I choose a point to land, I try to pick a place that no other team will pick. That’s because I want to collect enough firepower to be dangerous. And then I’ll go plant myself in the center of the circle and wait for the teams getting squeezed by the gas to come to me. The Superstore is in the center of the map and it has a ton of loot, but it’s also a magnet for teams and it becomes a death trap.

As with other battle royale games, Warzone has a collapsing circle. If you get stuck outside of it, poison gas kills you. One of the ways to predict where that circle is going is to shrink on the map is to go for the yellow assignments known as contracts. If you fulfill the contracts, you can get insight into where the circle is going to wind up.

My best tip is to avoid action for a while, collect a lot of loot, and then try to let other teams kill each other. When you fire at someone, you better be sure it’s worth it, because it will draw attention to your location and other teams can get the bead on you. I see so many players shooting at something far away and they have no chance of bringing down an enemy. They just give themselves away.

In Warzone, you can either go for a lot of kills, or you can go for the win, as one player said to me. But you can’t do both. There’s no shame in being a camper, because you will always see some kind of action in this game. If you’re in a building, hiding on the second floor is a good way to set an ambush. You can lay a claymore mine on the stairs. But you have to beware of grenades coming in the windows. It’s of course best to have your friends watching the windows or in close proximity, as they can kill someone who gets you and revive you.

Speaking of that, if your friend is downed, you should not immediately try to revive them. You should shoot and kill whoever downed them first. If you’re downed, you can slide along on the ground to cover, where your teammate can revive you without being shot.

In the match that we won, our teamwork didn’t start out in a stellar way. One of the players said she had a hangover, and the sound of gunfire in the game was really waking her up. Chandler and I stuck together, but the other players were often going their own way. But we all had microphones and eventually came together as a squad.

I also fell out of a helicopter (trying to reload and hitting the button that dropped me out by mistake) and had to survive a trip to the Gulag to get back in the game. We also wasted a lot of seconds trying to climb up some rocks that were impassable. It was not expert play.

But under fire, we did well. Two of us got ambushed but our teammates killed the lone attacker and revived us.

Chandler made some good calls about going to the high ground near the dam and eventually moving into the center of the ice. In the end, the luck of the closing circle was on our team’s side. A few teams were positioned around the dam, and we were caught in a squeeze on the rock island in the middle of the ice. But we had cover, and the other teams were forced by the closing ring of gas to come out into the open. They were sitting ducks, and fell victim to the closing ring.

I knew how they felt. In a second-place finish on another day, I had the high ground in a tower. But the ring closed and my tower was suddenly outside of the circle. Three enemies took me out as I exited the tower for safety.

Above: I’ve only one a single Warzone match so far.

That’s Warzone. It has a blend of chance and skill, and that’s what keeps me coming back. Like a slot machine player going for the win.

In fact, I’ve been so busy playing Warzone that I haven’t picked up Animal Crossing (my kid is monopolizing the Nintendo Switch in our house anyway with that game), and I have made very little headway in Final Fantasy VII Remake.

This is my game of choice for the lockdown, and I’m so glad it came out during this horrible time to offer a distraction for so many people. Thanks to the developers, who are part of my definition of essential workers at the moment.