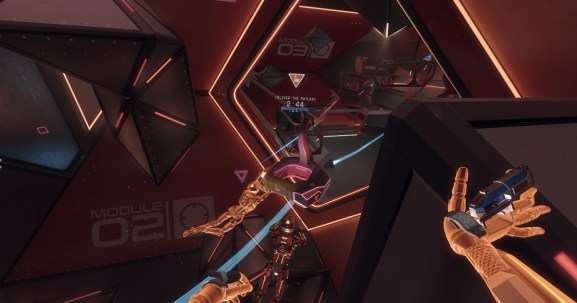 Echo Combat lets teams fight it out in a zero-g arena where they can hide behind cover.

Ready At Dawn announced that starting May 5, Echo Arena will be available in open beta on Oculus Quest.

The reveal came in a developer update to the Oculus blog related to work-from-home changes due to the COVID-19 pandemic. According to Ready At Dawn, development on Lone Echo II “has been greatly impacted” but they still intend to launch the game in 2020 with more updates coming soon.

As far as the Oculus Quest version of their zero-g sport Echo Arena: “VR has allowed us to reconnect in a new way, not only with our teammates, but also with the community at large,” the blog states. “We are therefore making our upcoming Open Beta for Echo VR on Oculus Quest available to everyone until the official launch later this year.”

We got into the closed beta recently for the game and captured video play through a full match. Check it out above.

The game seems to be shaping up incredibly well on Oculus Quest. The wireless freedom is eye-opening and it seems to run solidly on Facebook’s standalone headset. We’re looking forward to playing more in the coming weeks with more people now that it’ll be more accessible to all Quest owners. The game could end up being one of the big competitive draws for Oculus Quest headsets as the year progresses.

Echo Arena will be free-to-play when it is completed for Quest as well, and it will feature cross-play with Rift players.