Mike Frazzini is one of Amazon’s most-experienced homegrown game executives, as he has been at the company for 16 years and has worked on games at Amazon since 2009. Now vice president of games, Frazzini is one of the top people who figures out how one of the world’s biggest tech companies will participate in the industry.

Frazzini spoke about Amazon’s approach to making games at our recent GamesBeat Summit 2020 event. Many know that Amazon offers cloud services and other tools for game developers through its app store, Amazon Web Services infrastructure, and the Lumberyard game engine. For years, such services and mobile games were all Amazon did in games. But now the company is making its own games, and it’s doing it the Amazon way.

“Whenever we approach a new business or industry, the first thing we do is wonder who the customer is,” Frazzini said. “You ask, ‘What is their current situation, what are they struggling with, what are their needs, how might we surprise and delight them with something that we can build?'”

In other words, it’s both a data-focused and human-focused approach, where the voices of gamers and streamers and their audiences count as much as the creativity of the developers themselves.

Frazzini added, “In games, from the get go, we thought about game developers as customers and players as customers. The first thing you do is go out and meet as many of them as you can. When I showed up, we already had a video games business with Amazon Web Services. Game developers were using it.”

Above: TwitchCon 2019 drew thousands of people to San Jose, California.

Things got more focused in 2014, when Amazon acquired Twitch for $970 million. This showed people that Amazon was serious about getting into games, and then Amazon drew up a list of dream candidates to hire for its game business. Now, the wisdom of that acquisition is clear, as Twitch is growing rapidly, even before the pandemic had people look to game livestreaming as a form of entertainment.

Amazon recruited folks such as Louis Castle, John Smedley, Rich Hilleman, Christoph Hartmann, and many others to run various projects and studios. The company has game studios in Seattle, San Diego, Orange County in Southern California, and San Francisco. It also works with other developers around the world.

The gaming leaders that Amazon hired knew how to make games, but at Amazon, the approach started with “working backwards documents,” or describing the experience the player should have, based on the feedback collected. Frazzini said that Amazon even shows those documents to players to see if it sounds right to them. Once that feels solid, the teams start designing a game and writing the software to make it all work. Some things change along the way. And some ideas don’t make it, like Breakaway, an esports game that was shelved in 2018 after a couple of years of development.

“Making games was something entirely new for us, and in part we apply some of the same methods that we use in a lot of Amazon,” he said. “You hire great people — the best in the industry — and then you give them the freedom to create and invent. It’s not taking the playbook of Amazon and applying it to games. It’s taking the playbook of Amazon, applying the parts that make the most sense, and then learning and adapting it for making content.”

As an example, the retail business focuses on fast shipping. You can measure that and improve on it. With games, you try to create an engaging experience. The metric for fun isn’t simple. So there’s more exploration. That’s a big part of the exercise, and Frazzini said it is an “incredible learning experience” and games is a “fascinating category.”

“Making content is an important next step for us,” Frazzini said.

The games that are close to the finish line are the massively multiplayer online fantasy title New World, which has a supernatural take on colonial times; and Crucible, a science fiction survival adventure. Crucible is launching on May 20, and New World is set for August.

“From day one, the moment we release, we hope it delights a lot of people and they play it for a long time,” Frazzini said.

I asked if Amazon is considered making mobile games that it could launch every six months. Frazzini said the mission of “surprise and delight” and “invent on behalf of customers” led the company to focus on frontiers. One of these was Twitch, or game livestreaming, and Amazon will “bias” toward games that work well on Twitch, Frazzini said.

“Those games are typically the multiyear games,” Frazzini said. “We look at it as a frontier. It’s unknown, but there are enough signals to have confidence there is something interesting here. There’s going to be a lot of experimentation. You will get some things right and some things wrong. You iterate and experiment on this frontier fervently. You come up with ideas and notice things that you can double down on.”

Working during the pandemic 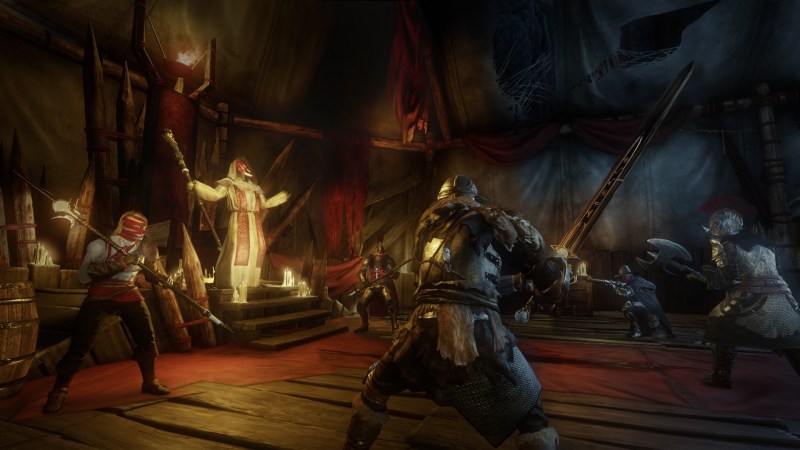 Asked about the impact of the coronavirus on the Amazon Game Studios, Frazzini said safety was foremost. The teams figured out they didn’t all have the right equipment at home, and Amazon had to get it to them. He noted that making games is an iterative process in which people give feedback by looking over the shoulders of someone creating something. Teams can’t do that anymore.

“That slowed things down, and it’s definitely created a challenge for the teams,” Frazzini said. “There’s definitely a (productivity) hit we’ve taken.”

But the notion of “Play Apart Together” is inspiring, as games are bringing people together during the pandemic, he said.

“People are turning to games as both a form of entertainment and a way to stay connected,” Frazzini added. “There is some inspiration that comes from that. Of course, not worth the cost. These are scary, troubling times.”

But the developers are motivated to get their work out so that players can enjoy them, even if they are in lockdown. Frazzini said that he believes that more people will wind up playing games, as family members get a better idea of how attractive games are while being cooped up without other things to do. And for Twitch, that means both gaming and non-gaming content are likely to take off.