Omilia, a startup developing natural language technologies, today announced it raised $20 million in its first ever financing round. Founder and CEO Dimitris Vassos says the capital will help strengthen Omilia’s go-to-market efforts as it eyes expansion in North America and Western Europe.

Omilia’s product portfolio spans a conversational platform and solutions targeting voice biometrics, speech recognition, and fraud prevention. Chief rivals offer some (or all) of these, including startups Replicant and Ada and incumbents Amazon and Google, but Vassos asserts that Omilia’s tech is superior. The company’s conversational agents understand semantics with 96% accuracy and complete over 90% of tasks without human intervention, he claims, and they’ve contributed to a 43% boost in call center capacity; a 42% decrease in return callers; a 50% decrease in average handling time; and a 21% decrease in agent operations cost across Omilia’s customer base.

“Current automated customer service technologies promise so much but deliver so little. Refreshingly, at Omilia we are not just riding the AI wave; we are delivering the advanced levels of customer care we’ve been sold for decades, at scale and with excellent customer experience,” Vassos said. “We abandoned the legacy approaches and outdated open standards which were holding back the customer experience, and with the customer care journey at its heart, we’ve built a platform capable of humanlike natural language interaction that delivers business benefits in the real world, at scale.”

Omilia’s Dialog Management Technology (DiaManT) can interact with users via speech or text within phone tree systems, webchats, email, mobile apps, SMS, smart speakers, and Facebook Messenger. It acts as a single point of integration with enterprise systems, driving conversational interactions from start to finish while elucidating the results of those exchanges for managers. 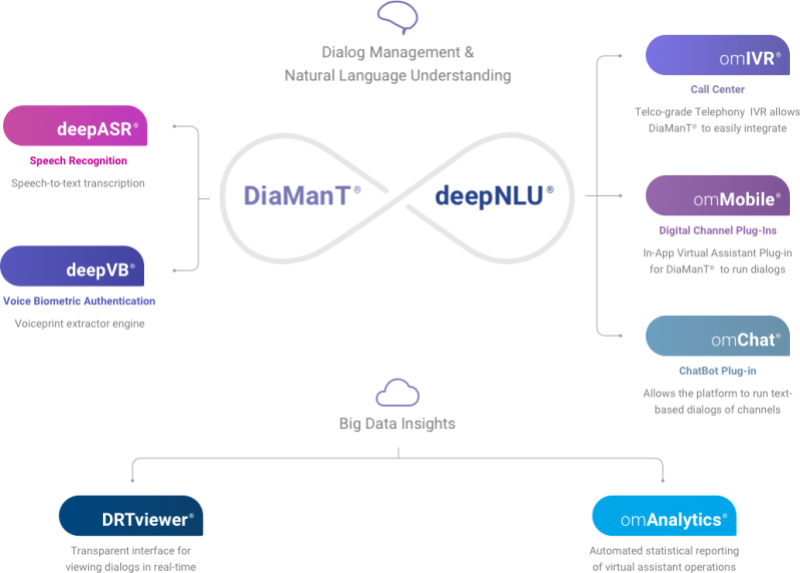 For example, in the context of Facebook Messenger, DiaManT can engage with customers, shifting between chatbots and live agents while preserving conversational context. It supports asynchronous communication, enabling customers to start and finish conversations on their own schedule, as well as limited web browsing for content and product recommendations.

Omilia claims its virtual agents — which speak 21 languages with a 4.26% speech recognition word error rate — have had over 1 billion conversations across 27 self-service portals in over 15 countries.

An AI-powered, context-aware, and memory-retaining engine — DeepNLU — underpins these agents, and it works to extract meaning from unstructured language by inferring based on what was said before. Multi-level concept annotations allow for low-level and high-level topic comprehension, and intuitive disambiguations enable DeepNLU to ask for additional information when the intents aren’t clear.

Omilia offers what it calls xPert Packs, which come with preloaded virtual agents providing out-of-the-box recognition and understanding of key concepts for specific domains. This includes concept annotation dictionaries, rules, and intents for businesses in banking, telecoms, insurance, travel, and utilities — for instance, over 400 unique intents, 180 entity types, and 54,000 entity instances for financial institution use cases.

For companies that require a more bespoke option, there’s Conversation Studio, Omilia’s toolset that enables the creation, management, and editing of conversational scenarios. Within Conversation Studio, intents created by combining different annotations can be mapped to actions like “self-service,” “transfer,” “disambiguate,” and “re-ask.”

Beyond conversational AI, Omilia provides DeepVB, a service that uses biometric voiceprints to authenticate customers as they speak. It samples speakers’ voices and computes their voiceprint in real time if there’s enough audio. Then, it compares the current voiceprint with the verified voiceprint stored in Omilia’s database to produce a confidence score, which DiaManT uses to drive conversations according to business logic.

In addition to scoring voiceprints, Omilia analyzes various call and session characteristics — including locations, device types, and credit card profiles — to detect signs of fraud. And it taps sentiment analysis, which combines both the acoustic characteristics of a customer’s voice and what they say in natural language to determine positive, negative, or neutral sentiment.

Vassos says that in the current pandemic, Omilia’s anti-fraud services have become particularly attractive to new clients, many of which have more than 200 agents and field over 4 million calls a year. The U.K.’s National Fraud Intelligence Bureau says that complaints of scams related to the COVID-19 outbreak rocketed 400% in recent weeks, and the U.S. Federal Trade Commission reports that people have lost $13.44 million in 2020 to coronavirus fraud.

“Comparing Omilia with current competitors is like comparing a luxury car to an engine on four wheels,” he said. “Both will get you from A to B, but you would not trust the latter for a family trip with the kids.”

Omilia’s raise was led by Grafton Ventures. The company, which was founded in 2002 and which has over 230 employees (with over 300 expected by 2021), has over 50 enterprise customers worldwide, contributing to $10 million annual revenues — a mix of perpetual and recurring licenses.