That spending level represents 9.3% growth compared to 2019, and it includes revenues for mobile, PC, and console gaming. Newzoo expects revenues for games to grow at a compound annual growth rate of 8.3% (that is, 8.3% growth per year), resulting in revenues of $200.8 billion by 2023.

As the world faces a harrowing and unprecedented pandemic, Newzoo said that gaming has become a means of escapism and time filling for many. As a result, one of this year’s growth drivers is an increased interest in gaming due to COVID-19-related lockdown measures. However, the launch of the next-generation consoles toward the end of the year is also a key contributing factor to the growth forecast.

In an email to GamesBeat, Newzoo said that the overall 2020 forecast is up based on the higher engagement, driving higher revenues. There are some caveats to that, mostly related to delayed releases, specifically in anticipation of the next-generation console release at the end of the year. In the latest forecast, Newzoo shifted this revenue uptake from 2020 to 2021.

Newzoo said all game segments saw an increase in engagement and revenues as a result of the COVID-19 measures, but mobile gaming saw the biggest increase. In total, mobile games will generate revenues of $77.2 billion in 2020, growing 13.3% from 2019.

Mobile will enjoy more growth than both PC and console gaming for a few reasons. Mobile gaming has the lowest barrier to entry: more than two-fifths of the global population owns a smartphone — and many mobile titles are free to play. On top of that, mobile gaming is becoming an alternative to PC cafes: the closure of these cafes in places like China has led many to (temporarily) churn to mobile gaming. And the mobile development process is less complex and, therefore, less likely to suffer delays from COVID-19-related disruption.

Newzoo expects engagement for mobile games to rise even more rapidly. After all, it is infamously difficult to convert players into payers on mobile. Overall, the world will have 2.6 billion mobile gamers in 2020; of which, just 38% will pay for games. And once the pandemic restrictions are lifted, Newzoo expects a correction following the pandemic to happen in mobile gaming, as the barrier to exit is low, meaning people can drop it quickly if they have other things to do.

In an email, Newzoo further said the barrier to exit on mobile is the other side of the coin of mobile gaming’s accessibility. If consumers purchase a PC, console, or game on either of these platforms specifically to play, there’s a sunk cost element that is more likely to keep them playing even after the lockdown measures are lifted. Most people already own a smartphone, and the vast majority of mobile games are free to download, so there’s no similar entry cost for mobile games. That makes them easy to be picked up, which is why Newzoo is seeing the increase in engagement and revenues now, but also easier to drop once people return to their ‘normal’ lives.

Mobile is the prime beneficiary of the upward adjustment, Newzoo said in the email. The accessibility of mobile games makes them easy to be picked up for all people, including non-gamers. Furthermore, the PC cafes that many players in Asian markets depend on were or are still closed. Mobile gaming is thus the most-preferred alternative. 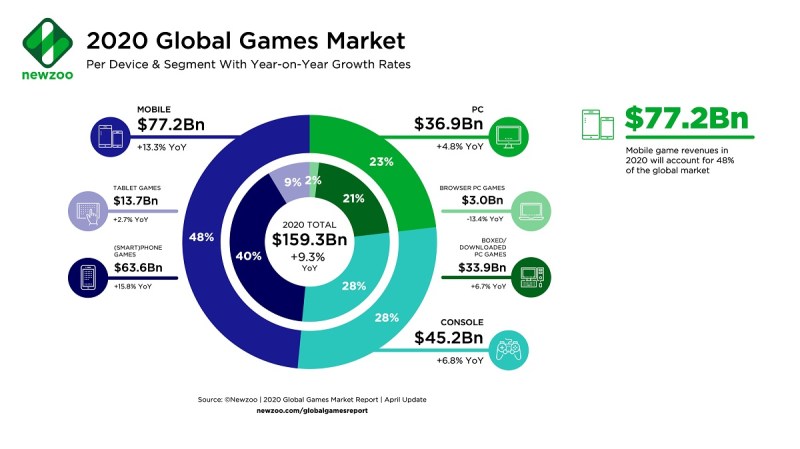 Engagement and revenues are set to grow due to the lockdown measures, at least in the short term, but COVID-19 is also having negative effects on console gaming.

Physical distribution, massive cross-company collaboration, and certification are a major part of console game development, which may result in game delays in the future or games scaling down scope or features to hit release windows.

In the second quarter, Sony will ship some PlayStation 4 exclusives The Last of Us 2 and Ghost of Tsushima in the summer. These titles were already delayed due to distribution issues (resulting from the pandemic), but they now have revised shipping dates. Even ported games are affected, with Switch ports of The Outer Worlds and The Wonderful 101: Remastered also receiving COVID-19-related delays.

These delays will also impact the games scheduled to accompany the launch of next-generation consoles, as the development process for next-gen games was a relatively unknown quantity for developers — even before the pandemic.

Growth in the console market has slowed down significantly compared to the heights it reached in 2018. Anticipation for the next-gen consoles already led to lower-than-expected spending on console last year. Due mostly to this, Newzoo adjusted the 2019 global games market estimate to $145.7 billion.

While Newzoo said it will see a short-term uplift this year due to the lockdown measurements, the next-gen consoles and associated content are essential to kickstart a new phase growth in that segment.

Due to the new generation of consoles, growth in console game revenues will steadily grow every year, although Newzoo does not foresee revenues reaching double-digit growth before five to six years into the launch. Mobile gaming will continue to be the fastest-growing segment overall.

Finally, PC gaming, driven by its 1.3 billion players, will grow 4.8% year on year to $36.9 billion in 2020. This growth can be almost fully attributed to the lockdown measures. Unlike console gaming, new releases for PC rarely reach revenues that significantly change the market’s outlook. Many of PC’s most popular games have been at their respective positions for at least three years, with some retaining popularity for over a decade.

What’s more, the PC ecosystem moved to digital (from physical) much quicker than console did, so physical distribution is almost a non-issue for PC. That said, the PC segment isn’t completely unaffected: PC titles are also getting delayed due to COVID-19, including the port of Death Stranding.

Across all three segments (PC, console, and mobile), almost half of consumer spending on games will come from China and the U.S. in 2020. However, growth will be driven by emerging markets in regions like Latin America and Asia-Pacific in the years to come.