Nvidia CEO Jensen Huang has been holding geeks spellbound with the mysterious topic of his speech for May 14 at 6 a.m. Pacific time, when he will deliver the GTC event keynote address. Now we know from this sneak peek video that it’s the “world’s largest graphics card.”

Huang originally planned to make the speech on March 23 at the GTC event in San Jose, California. But the coronavirus pandemic put that speech on hold, and Nvidia moved the conference online as GTC Digital. And now Huang will catch up and give the keynote.

In this preview video, Huang says he’s been cooking something for a while in his kitchen. Then he pulls out a giant board with multiple graphics processing units (GPUs) on it. 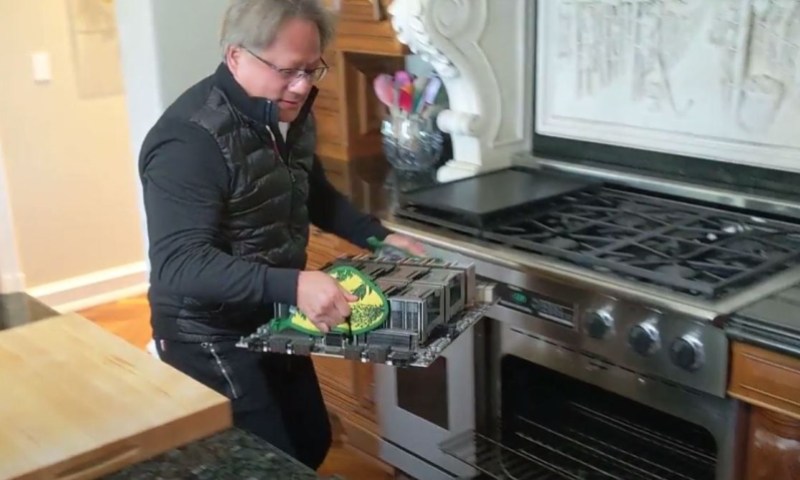 Nvidia isn’t commenting on the announcement that goes with this video. But as you can tell from the grunt that Huang makes as he pulls it out of his oven, it’s a pretty hefty thing.

Enthusiast websites have speculated that the new graphics cards will feature a new GPU architecture, dubbed Ampere. These GPUs are expected to be part of the GeForce RTX 3080 and GeForce RTX 3070 cards coming later in the year, and they’re expected to be 75% faster than current-generation GPUs based on the Turing architecture, the websites speculated. One of the advantages is that they will be built on a 7-nanometer manufacturing process at Nvidia’s factory partner TSMC. These Ampere-based GPUs will have thousands of cores dedicated to non-graphics tasks (CUDA cores), AI work (Tensor Cores), and real-time ray tracing (RT cores).

The speech will air on YouTube on May 14 at 6 a.m. Pacific time. Nvidia has said that Huang will highlight the company’s latest innovations in AI, high-performance computing, data science, autonomous machines, healthcare, and graphics during the recorded keynote.