Amazon has been cooking its science fiction Crucible game for years, and now it’s finally letting players into the world of the free-to-play team shooter on the PC.

It’s an important first PC game from Amazon that will provide competition for Overwatch and Riot’s new Valorant, which is in beta testing. And it will help determine whether Amazon, an e-commerce and data services company, can find its way in games.

Crucible is a hero shooter, where you choose from a roster of aliens, robots, and humans, and work with teammates to hunt opponents, take down hostile creatures, and capture objectives. You have to balance your team with tanks, snipers, brawlers, and such. And you fight it out on the planet Crucible, which in addition to dangerous critters has a valuable resource dubbed Essence.

Players begin each match by selecting from a lineup of 10 hunters (Amazon will add more over time), each with distinct loadouts of weapons and abilities. With anywhere from two players to eight players on a team, you’ll quickly notice there isn’t an overwhelming number of combatants like the 150 in Call of Duty: Warzone, as Crucible was designed from the start to be watchable. This is from Louis Castle, the head of Seattle’s Relentless Studios at Amazon, in an interview with GamesBeat.

“It’s exciting to watch anybody playing Crucible. You can jump in, randomly pick a character, watch them, and it’s instantly exciting,” Castle said. “The map is relatively small compared to the big open world maps in some of the battle royales out there. The team size, the number of players, is intentionally small, so the match resolves more quickly.”

Amazon’s Twitch livestreaming division is no doubt eager to get excited about a home-grown game. And it’s nice to see Amazon think about the strengths that it offers as a company, with game designers creating games that will show well on Twitch.

I’ve played the game for a few hours, and these are my impressions. I don’t feel that’s enough time to give this game a full review, but it is enough for me to see what sort of skill you need to play it. The tutorial can take you through how to play the game in a matter of minutes. But you’ll have to learn how to play the characters one-by-one. 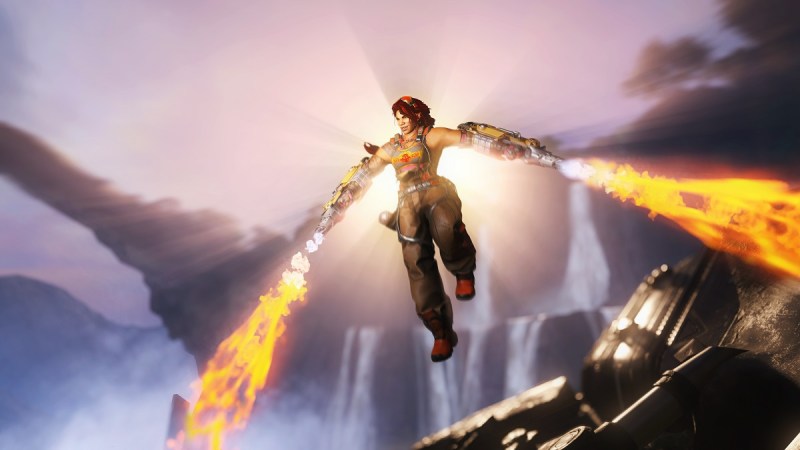 Crucible has a hunter for most playstyles. Earl is an interstellar trucker built like a tank. He has a giant gun with four barrels. Bugg is a robot botanist who can lay down plants that attack if you step within range of them. Summer is a former welder who wields flamethrowers. She can point her weapons downward and use the propulsion to fly for short distances, giving her the ability to escape from a hairy combat situation or catch up to a fleeing enemy. Drakal is a melee-only character with a giant ax and a chain that can pull somebody to him.

Ajonah is a sniper who can lay mines as you chase after her. These heroes are recognizable enough for you to know what they can do on the battlefield and give you time to counter them. In the larger battles, chances are your team has a hero who can nicely counter whatever the enemy throws at you.

These characters are all well designed, and they fit into the colorful terrain of the game’s first map. Before each match, you can customize the way the character levels up during the match. 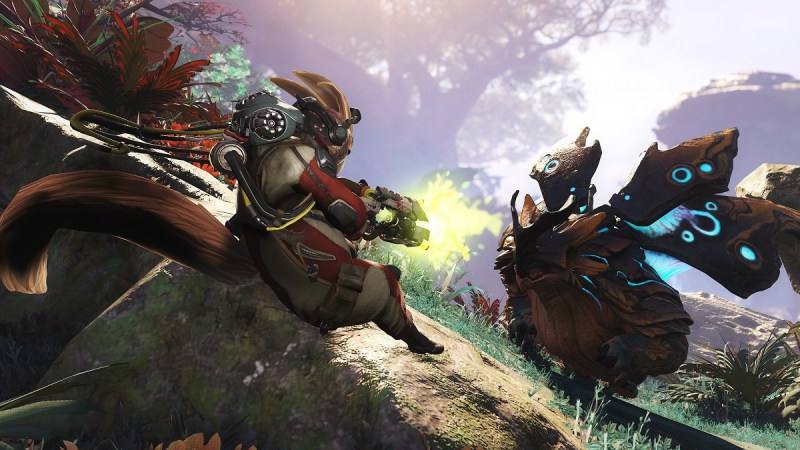 Above: Crucible forces you to fight your environment on the planet as well as multiplayer enemies.

Crucible is launching with three modes: Heart of the Hives, Harvester Command, and Alpha Hunters.

In Heart of the Hives, two four-player teams battle giant boss Hives that spawn throughout the world. Each Hive contains a Heart, and the first team to capture three Hearts wins the match. The battle is balanced between racing to defeat the opposing team and battling to survive and capture the powerful Hives.

Harvester Command challenges two teams of eight players to capture and hold Harvesters spread across the map, vying for control of the Essence that drew them all to the planet. The first team to deplete its opponent’s resources wins. This is a bit like Domination mode in Call of Duty, though there are five control points instead of just three. Of all three modes, I felt the most useful in this one, which was easy for me to grasp.

In Alpha Hunters, eight teams of two fight to be the final team standing. When I played this game, we had some trouble finding enemy teams to hit. But there’s no excuses in this kind of fight. If you take on the enemy, you win if you shoot better or work better together than the enemy duo does. If you die, you’re out of the game. You can make alliances with other players, but then you can break the alliances at the end in order to go for a victory.

As Castle said, these smaller team modes and the smaller map lead to matches winding up quickly. I think that would be even more true if, as mentioned down below, the game played a little faster.