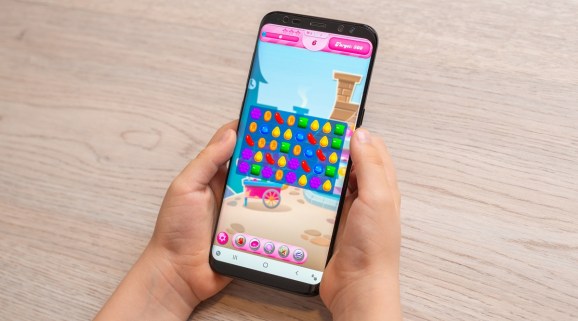 Candy Crush Saga has hundreds of millions of players.

Working Americans would rather play mobile games during breaks than drink coffee, according to a survey commissioned by King, maker of the popular Candy Crush franchise.

The survey found that 83% of employed Americans play mobile games and that 55% of them play during breaks in their workdays. Among those who play at work, 65% choose to take a break with a mobile game, compared to 56% who choose a cup of coffee.

For those of you find this to be sacrilege, you can rest easier knowing that if you looked at 100% of Americans, as opposed just those who work and play games, you’ll probably find that coffee is still more popular. But this survey zeroes in on the people who are working during the pandemic and need some way to decompress.

The data shows that mobile games are right up there with one of the most common break routines among Americans, and it shows that games are a popular way to dial down stress during the workday, particularly during the pandemic.

The Gen Z workforce turns to mobile gaming over unwinding with a cup of coffee or tea, with more than half (58%) playing mobile games during work breaks. And more than three-quarters (76%) of Candy Crush Saga players surveyed find that playing the hit game makes them feel more efficient and capable of producing better work, King said. Yes, of course King would say that.

The choice is part of a larger trend in which consumers are approaching mobile gaming not just as a fun pastime, but also as a much-needed respite from daily stressors. More than two in five workers (42%) are turning to mobile games, largely puzzle games, not only to relax but also to practice self-care and have a moment of “me-time” in an otherwise hectic day. These moments tend to be brief, with 53% of those who game at work saying they need no more than 10 minutes-to-20 minutes to feel satisfied with the break.

Ben Waber, president Humanyze and author of People Analytics, said in a statement that it’s important for people working in offices or from home to take short regular breaks to maintain performance, reduce stress, and decompress.

Kelton Global conducted the survey for King and quizzed 2,002 Americans ages 18 and over who are employed full-time, with a margin of error of 2.2%.

King, a division of Activision Blizzard, had 273 million monthly active users in the first quarter, mostly from Candy Crush Saga.