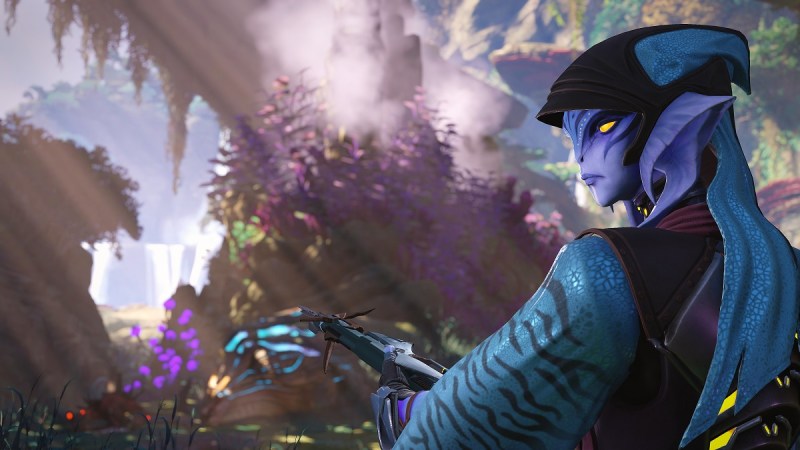 Above: Ajonah is the sniper of Crucible.

GamesBeat: Have you always thought about having small matches? Eight-on-eight, like a Call of Duty multiplayer match, rather than large-scale battle royal.

Castle: From the beginning, it was built to be watchable. It’s exciting to watch anybody playing Crucible. You can jump in, randomly pick a character, watch them, and it’s instantly exciting. The map is relatively small compared to the big open world maps in some of the battle royals out there. The team size, the number of players, is intentionally small, so the match resolves more quickly.

More important, the things that [matter] to you are happening on your screen most of the time. I don’t remember the last measurement, but we do measure how much time, if you’re watching any random character in the match, things are exciting on the screen. If you jump into a battle royal and randomly follow someone, you might see them hiding in a closet for 20 minutes, which is not very interesting. Or they run around like a maniac opening crates trying to find the weapon that will keep them from getting killed instantly. Some games you’re just shot in the head from a mile away and you don’t know what happened.

None of those things happen in Crucible. It’s designed around making sure every game session is exciting and interesting to watch and play.

GamesBeat: As far as what I might be reminded of here, there’s Overwatch in some of the way it looks. It resembles Call of Duty’s Domination mode in the way that the Harvester mode plays, I think. There’s five locations instead of three. But it feels like it’s mixing and matching some things that people are going to like.

Castle: Crucible was built for competitive play, built to be watchable. We have a marketing message that sums it all up, level and adapt. We’re focused on a game experience that we think is exciting and interesting to play competitively with your friends. Each one of the modes is designed around a different set of features that we liked in other games, but it also has its own layers. It’s not intended to be derivative, a direct copy of any other game, which is why people struggle a bit. You can’t really say it’s Game X plus this, because it’s not. It has elements from lots of different genres.

That’s quite intentional. When the game was being designed and built, it was important to us to think about what’s going to make the best experience possible for the kind of thing we were trying to deliver. We liberally borrowed ideas from other games. But we didn’t follow any particular game. It doesn’t feel exactly like any one game. It’s not League of Legends as a third-person shooter. It’s not battle royal. It’s not that easy to pigeonhole. It’s a unique expression of elements from all sorts of games.

GamesBeat: The movement seems slower than some other games. Some of the characters are a little lumbering. Was there some intention to slow down the action in some ways?

We’ve mixed genres up. There’s a sniper kind of character that’s similar to Widowmaker, has some elements, but not the same. That character has a grappling hook to swing all over the match. We have flying characters. It’s not that everyone is slow. It depends on which character you’re playing If you’re playing Earl, he’s a big space trucker. He tromps around on the match, and that’s intentional. But what was also very intentional is that characters don’t have one-hit kills. We’re careful about making sure that you at least have a moment to react to an attack. You’re not going to just wander in and die instantly. That’s intentional.

When you talk about slowing down the game, we weren’t trying to slow down the feeling of reacting. In fact, we’re tuning up the speed of movement for a couple of characters so people have something that moves really peppy. But at the same time, we don’t want people to die instantly. There’s definitely some attention around that. If you play the game poorly and your team doesn’t level up and you’re level three when the other team is seven and you have badly matched characters, sure, you might die very quickly, but that’s the exception, not the norm. 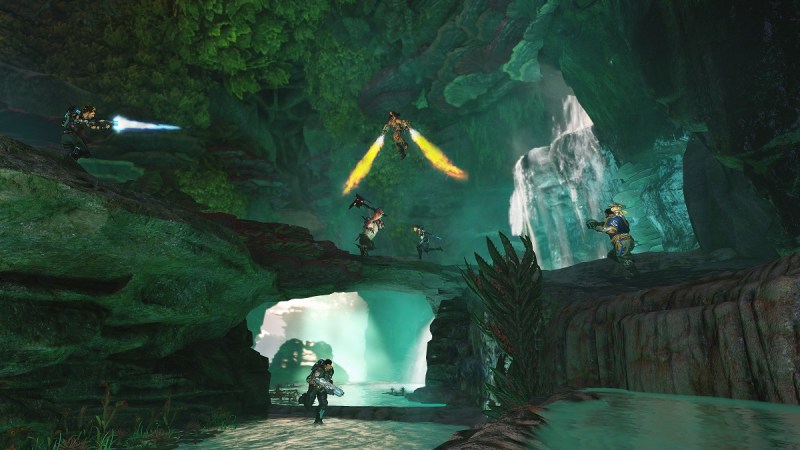 Above: Crucible has some colorful fauna.

GamesBeat: There’s no loot. There are powerups, pickups, but you didn’t want to litter the field with things to grab?

Castle: There’s lots of stuff to interact with on the map. That may not be as evident yet, because it takes several times to play through the game before you start to learn the map. It’s quite large for the number of players and the complexity level. It’s a rich and deep experience, with very strategic placement. There are plants that can make you temporarily invisible to sensors, and other ones that heal. All of those are deliberately placed and designed carefully. Their placement is very nuanced.

What it does is it creates knowledge. As you learn the map and learn the way the world is put together, you start to become better at using the environment to your advantage. That’s very intentional, because it gives depth to the game. There are lots of things to pick up and interact with. In fact, you don’t have to be in combat to be useful. You can interact with a device that helps you get more essence and level your team up, or you might be using something else to guard a particular area so that other players won’t be able to use the effect.

We also have the planetary events. There are dozens of those right off the bat, and many more coming. They randomly occur during the match. They’re set up at the beginning to show you what’s coming. You don’t know exactly when they’re going to occur, but you do have a pretty good idea if you’ve learned them a few times. There’s a damage amplifier, for example. There’s two of those. If the other team gets both damage amplifiers, they have an extreme advantage in the late game. It totally changes your strategy. Maybe your team thought they would play the long game and let the other team get some wins early on, but then capture three points at the end. That changes dramatically if all of a sudden there’s a damage amplifier and the other team gets it.

That’s one example of dozens, how they interact with the strategy. That’s the adapt part. No plan survives contact with the enemy. You can go in with a plan and try to execute that plan, but you have to be willing to adapt to the situation.

GamesBeat: I noticed some of the matches can last quite a long time. You have a wide variation there. If you die quickly in the battle royal part, you’re out.

Castle: Yeah, you can watch your teammates or go back into another game or whatever. There’s only 16 players. It’s much faster than a 150-person game, 100-person game. But there’s still-the variation between a fast match and a long match in Crucible is pretty dramatic. It might be as short as 10 minutes, or even less if a team is really on fire. They’re typically 15-ish, right around that range. I don’t remember our average right now. But that’s another thing the team watches very carefully.

We look at both the median and the mean. The median match is the most important to us. What’s the typical experience? There will be extremes. Things like Harvester Command can last a long time, because people can go back and forth and not score enough points. Heart of the Hives typically doesn’t last that long. It’s the first person to three hive hearts. If you get down to two versus two and you’re doing the last one, that can be a much longer match than if someone just sweeps all three and does a hat trick. There are variations, but whether it’s short or long, it’s never boring.

GamesBeat: It feels like a good time to get it out. Everyone’s stuck at home. They need some games to play.

Castle: We actually delayed our launch slightly, which is well-covered out there. We were looking at the launch date, and it was right around the time that things were getting dire in Washington. We were concerned that our team would have to be dealing with, first of all, moving from working at the office to working from home, and then shipping a game, and trying to take care of their kids. Maybe a family member gets sick. It was just too many things stacked on top of each other that could disrupt the health and happiness of our team.

We pushed the date out a little while, just to put it out to where we thought, “OK, we’ll have time to absorb what it means to work from home. We’ll get into our routines.” We planned all our schedules to make sure we have the right amount of content. I’m glad we did it. I was anxious to ship the game, same as everybody on the team. But upon reflection, it was the right idea, to give us just a bit more time. We’re still right in the thick of COVID-19, of course. Nobody could have predicted that. It’s a good time to launch a game. Crucible is certainly ready to be out there.