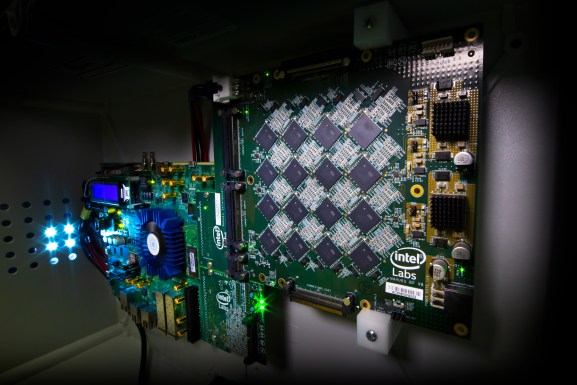 One of Intel’s Nahuku boards, each of which contains 8 to 32 Intel Loihi neuromorphic chips, shown here interfaced to an Intel Arria 10 FPGA development kit. Intel’s latest neuromorphic system, Pohoiki Beach, is made up of multiple Nahuku boards and contains 64 Loihi chips.

Intel’s fifth-generation Loihi chip uses neuromorphic computing to learn faster on less training data than traditional artificial intelligence techniques — including how to smell like a human does and make accurate conclusions based on a tiny dataset of essentially just one sample.

“That’s really one of the main things we’re trying to understand and map into silicon … the brain’s ability to learn with single examples,” Mike Davies, the director of Intel’s Neuromorphic Computing Lab, told me recently on The AI Show podcast. “So with just showing one clean presentation of an odor, we can store that in this high dimensional representation in the chip, and then it allows it to then recognize a variety of noisy, corrupted, occluded odors like you would be faced with in the real world.”

Neuromorphic computing has been around since the 1980s and is an attempt to use technology to mimic biological systems. Intel believes it is “the next generation of AI” and has designed its Loihi chip with neural units that approximate some functions of a human brain.

“We’re taking more of a first principles perspective of rethinking computing based on what we find in the brain, ignoring or forgetting everything we know about conventional ways of designing and computing chips, and instead just trying to kind of reverse engineer and understand the principles of what is the brain doing and mapping that into silicon,” Davies says.

Listen to the podcast here:

The goal is not just to recognize an odor, but to then be able to make human-level generalizations about that odor. If it’s an apple, is it a Red Delicious or a Granny Smith? Is it ripe or rotten? Is it part of a meal that a human might eat, or is it poisonous?

With over 100 billion neurons in the average human brain, the company is still three orders of magnitude away.

Subscribe to The AI Show on your favorite podcasting platform to get the full story: