GamesBeat: As far as things that will test this new environment, if you launch a new game, you have to think about–would I spend all the same marketing dollars on that game? Would I launch it in a different way, because everyone is still sheltered? What are some of those thoughts?

Mahoney: We’ve launched a couple of big updates, which are kind of like launching a new game. When you do a big update you do a lot of promotion around it. We’ve also launched a new game, KartRider Rush+, which is the first major mobile derivation of KartRider, the original KartRider. It’s KartRider one but on a mobile device. We launched it two days ago and it’s gone great for us. But all our marketing was online marketing. 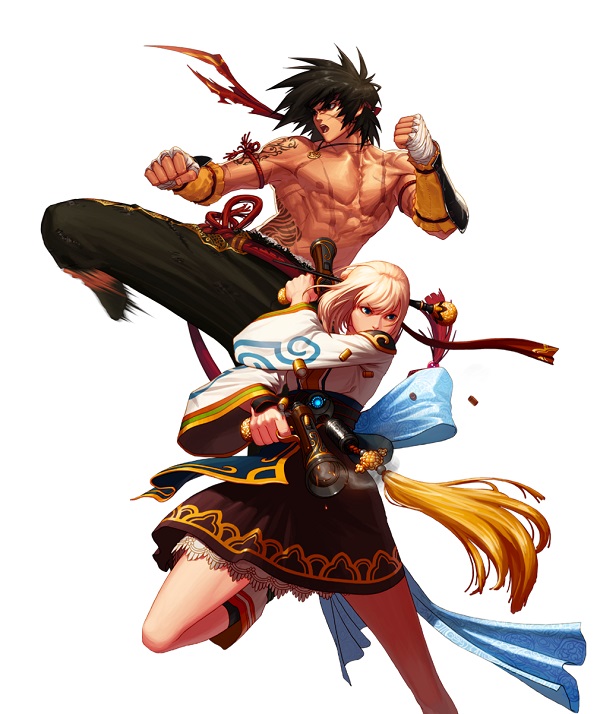 Above: Dungeon Fighter Online debuted in 2005.

GamesBeat: I can see that being much more performance-based. I don’t know how you do something that might have been more about physical marketing, brand marketing.

Mahoney: There’s a lot you can do online with that. When people collect physically in a PC cafe or at a show you put on, that’s fun for people, and it tends to generate its own level of awareness. But we can’t do that now. It’s a separate topic we probably don’t have the time to go into, but I also happen to be one of the people who thinks that all marketing is changing radically right now. This is all going to change anyway. But again, the forces were already in play. COVID is just bringing this out.

Again, I’m fascinated by this topic of stuff we knew was in play, but we just didn’t happen to acknowledge it was happening. Daniel Kahneman won a Nobel Prize for his work in behavioral economics that was in large part on this topic. You have this recency bias in that you think the world looks and works just like it’s been working and looking in the last week. It’s hard for you to conceive of a world that’s different from that. Saying goodbye to that notion is like saying goodbye to a loved one. The trick is, if you want to think about this new world, you have to go through your five stages of grief really fast so you can get to the other side, where you have a beginner’s mind and you can deal with this new world. We’re living in a new world, certainly in the media industry, but COVID is bringing some of this advertising stuff forward as well.

GamesBeat: Have you identified any of what you would already consider the old way of doing things, things that Nexon is no longer going to do?

Mahoney: Yes, but we haven’t announced them yet. Well, let me back up just for a bit on that topic. If you are of the belief that the upper right is where the world goes, or at least where is most appropriate for us, then multiplatform is just a no-brainer. We want to be where our customers are. Playing a virtual world, going to a virtual world–all these different devices, which are now on the hardware level very capable, and now we have cloud, which can potentially bring it to you if they get things going at Google and other companies–those are just windows into this virtual world that exists in the cloud. You operate the cloud, operate this virtual world, but there are many access points or windows to access that.

We’ll just use the windows that are capable and have the most users. But that’s the way we think about it. Because we’re not doing anything else, we can focus on super-serving that virtual world and opening up these new windows.

GamesBeat: Does cracking into the west get any different in this new world?

Mahoney: Not because of this new world. I’m looking forward to talking about Embark. I know you know the team, because I know you know Battlefield well. We bought the company last year. They have a very similar view of the future as we do. Our game developers would be the first to tell you that western tastes are not our forte. Triple-A games of a western style are not something our Korean or Japanese studios have understood very well. But we do know how to make a game that’s 15 years old grow like crazy, to double in size, as we did most recently with a 17-year-old game in Maple Story, and Dungeon Fighter and so on.

They said, “Wow, Maple Story.” At the time it was 15 years old. “How do we make that happen for us? Because we don’t know anybody who’s made a forever franchise. We want to learn that.” Or they looked at Dungeon Fighter and said, “It’s a $15 billion franchise life to date. That’s bigger than Star Wars.”

GamesBeat: It’s beating Star Wars even after the third trilogy?

Mahoney: I need to double-check that number. But it is bigger than Star Wars. It was quite substantially bigger than Star Wars last time I checked. Now, that’s box office. It doesn’t include lunch boxes and T-shirts and that sort of stuff. It’s not licensing. But apples to apples, gross to gross. It’s either one, two, or three among the largest video games franchises of all time. We’re not quite sure what total life-to-date is on Call of Duty or Grand Theft Auto. But it’s one of those. They looked at that and said, “I want that sort of longevity and size. How do I learn those techniques? What techniques and technology do I need?”

We saw that they knew how to build a western-focused triple-A game much better than we do. They made Battlefield, which used to be, until they left, a third of EA’s revenue. Patrick Soderlund ran EA’s studios very successfully from 2014 to 2018. Our idea is to do yin and yang. What they’re good at and what we’re good at. That’s one of the core ways that we’re addressing the opportunity in the west. None of that is COVID-related.

GamesBeat: Some people worry about this other shoe dropping. With 30 million people out of work in the U.S., you don’t know how they’re going to behave. It’s hard to predict whether games can be that recession-proof.

Mahoney: I’ll give you my take. We’ve been through two major recessions in our core markets in Nexon’s history. Not long after we were founded in 1994, we had the 1998 Asian financial crisis. People here don’t remember it as all that bad. I remember it because I got married that year. It didn’t seem so bad to Americans, but it was apocalyptic in Asia. Currencies were collapsing left and right. It was ugly. Our business did well in that. Our business likewise did well in the 2008 global financial crisis, as did most other game companies.

We’re in the microtransactions business. We’re asking for a dollar here, five dollars there. Every entertainment industry has done well in downturns since the Great Depression. But I think the things that are going to be more hard for us–the higher you go up the food chain in terms of price, the less resilient you’re going to be. The more you ask of a customer in dollars for time, the harder things will be. The game industry is way ahead of every entertainment industry I know of, except maybe Netflix, but they have a cost problem. I tend to think we’re enormously resilient in the game business. We don’t ask for a lot per hour, as crazy as it seems, compared to other forms of entertainment.

GamesBeat: Do you think there’s an endgame, the way that Tim Sweeney has talked about it, where the metaverse is where we end up? Roblox seems to be architecting for that future as well. You’re in this space, but I wonder whether you think the same way about something like Ready Player One being where we’re all going.

Mahoney: Tim has probably been as eloquent as anyone in the industry, and I appreciate that he is doing that. And by the way, we think about this all the time at Nexon. We were just talking about this at our virtual strategy offsite the other night. We’re already in the virtual worlds business in many respects. We have a virtual set of politics in the virtual worlds. We have a virtual sociology, playing with friends and working with others and so on. We certainly have virtual economies. Different games have varying levels of depth in each of those components of things.

Having said all that, I don’t think what we’re doing today looks anything like what it will look like 20 years from now. I also don’t happen to believe–I thought Ready Player One was a terrific book. It was a so-so movie. I don’t think that Spielberg particularly understands games. You probably had the same impression that I did, which was, where’s the game? Where’s the challenge? Where are the limitations? It was kind of like Second Life. You could do anything with no limitations. It worked well as fiction.

In terms of the idea of contributing to a virtual world in a substantial way, I’d say absolutely. But it will look a lot different from our old metaphors. I have my own opinions on what that will look like. We’re putting resources against what the ideas of the Nexon management team say about that. They answer your question. But I guess I’d say the basic thing is that if you think you have an idea of exactly how it will look, you’re probably wrong. We’re going to iterate like crazy over the next 10 to 20 years as we do this.