Mach: People talk about their dogs. Before we all went remote, we were already doing the taps on Fridays, and we already had socials and barbecues and board games and mentorships and things like that. People gravitated toward what they were interested in. But setting up more tools and more areas for people to find out about each other online has spawned a lot of interesting new opportunities that we never got to take advantage of in the office. Now we do things where everyone is getting to know their co-workers. We’ll have topics to discuss for socials. We’ll go down the line and ask, “Where were you born? What’s your favorite game? What are you playing now?” We don’t normally get the opportunity to do these things regularly in the office, where everyone’s doing their own activities. But because we bring everyone together for these big socials, we get to mix and meld and learn different things about different people.

Besides that, we also do a lot of surveys. They’re all anonymous and optional. But we do these surveys for employees where we ask them, “How’s your mental health for this week? Are there any activities you’d like to do digitally over the course of the month? Would you like to see something improve?” We get a lot of good feedback. We also have some surveys where we let people volunteer if they want to be a moderator for a club, or if they want to own an activity. We give them that opportunity, and we’ve been getting surveys where people give us a lot of information about their interests that we never knew. We’re able to expand on that because we have the tools to do it. 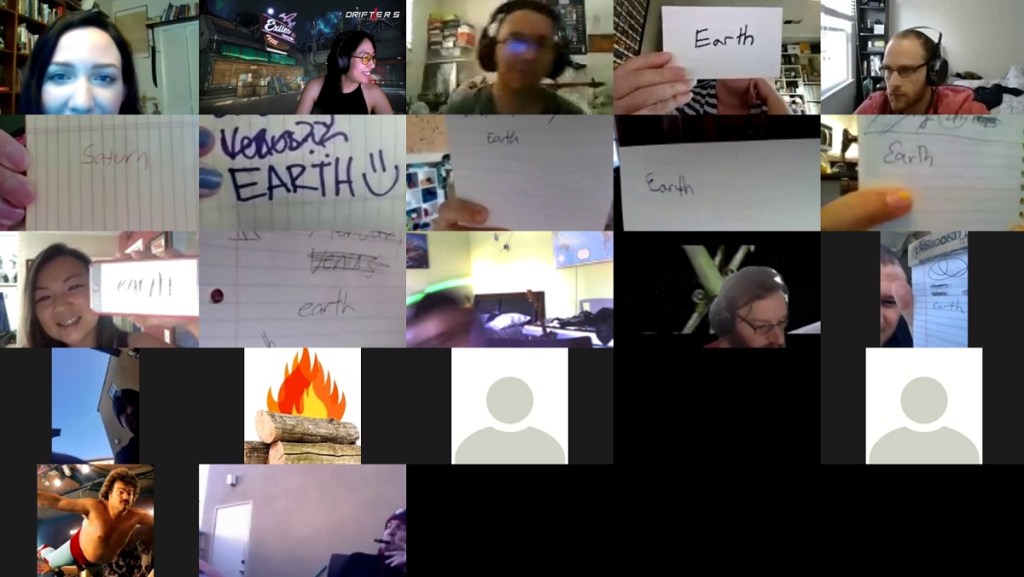 Hendricks: We’re using SurveyMonkey, but we’re using it for our playtests with our new IP we’re working on too. We just decided we could use it for our employees too. We threw something together when we started doing weekly updates on the status of COVID. When are we coming back to work? What do we know? That kind of stuff. We’re trying to keep people as informed as we can. Obviously, as you know, the information is gray and murky at best, so we’re trying to pull from as many resources as we can. States and localities all have different ideas about when it’s okay to come back to work. Where we’re at right now we’re still not an essential business.

But during that initial thing we pushed for surveys so we could get — where are people’s psyches at right now? We made them anonymous so people could contribute. We asked some pointed questions. How is your mental health? Are you lonely? We got some good feedback. Wouldn’t it be cool if you guys did this? We got a surprising number of returns on those the first time, so that’s super useful. We know we’re doing the right things. People are happy, or as happy as they can be in this situation.

GamesBeat: Are there policies that you have to put in place to be prepared for what could go wrong? I can think of things that can go badly when you mix private time with work time.

Hendricks: We follow the same rules as we do at work. Harassment, all those normal HR-related issues are still in place. We don’t tolerate anybody putting anybody down, any of that kind of stuff. We’re all very jovial. We poke fun at each other all the time. I think we’re pretty mellow. We haven’t run into anything yet. But HR is obviously heavily involved in all the decisions on communication with our employees to make sure it’s following all the local statutes and guidelines, so we’re not crossing any lines.

You’re right, though. It is a fine line. You’re trying to be personable with people. You want to get them to feel comfortable with each other. But you have to be almost standoffish at a certain point. It’s tough. But I think we’ve found a good balance.

Mach: Video is optional, as Brad was mentioning earlier. We want to see people’s faces, but we don’t force people. We try to create a lot of options where there might be some people who are a bit shyer, or some of the activities they like aren’t necessarily as social, but they still want to be a part of something. We give them many different ways and different places, so that way they don’t feel like we’re pigeonholing them into one way of communicating. We’re always open to adding more avenues of communication.

GamesBeat: As far as ways to amp up the fun, I’ve seen a couple of VR companies talk about — if you have meetings in VR they can be a lot more fun than Zoom. I don’t know if anyone’s been veering off in that direction to try to make the environment more immersive.

Mach: Some people get a bit of motion sickness, things like that. What we try to do with our social gatherings and activities is make it as inclusive as possible. If someone wants to use a video or someone wants to type in the text box, they can choose either one. We try to make it fun, and we have some Fridays where we do things like show and tell, things that are fun, but we try to make it inclusive such that people aren’t limited by lack of technology.

We have a lot of fun, quirky other activities we do. Even the pub quiz that we’re doing tonight, we’re doing a quiz where we’re doing a general kind of Jeopardy quiz with everyone, and we’re basically using pencil and paper on a webcam or typing in a text box. That way almost everyone can participate.

GamesBeat: People have mentioned Battleship as a good game to play with two players, without having to reach through a screen and grab a card. I don’t know if there are many games that have been created for this kind of situation.

Hendricks: Back to the spin-the-wheel thing, it’s funny, because for some reason or another, I’ve won at least every other time, and I keep telling Kitty to take my name out, because it keeps landing on me. I think it’s rigged. I don’t know. Most people who’ve won once say the same thing. If it lands on them again they say, “I already won, let everyone else win.”

Mach: We even have some people who’ve never won before, and they say, “You know what, this will go better to someone else, so I’ll give it back and double the prize pool.” People can pass their gift to someone else. 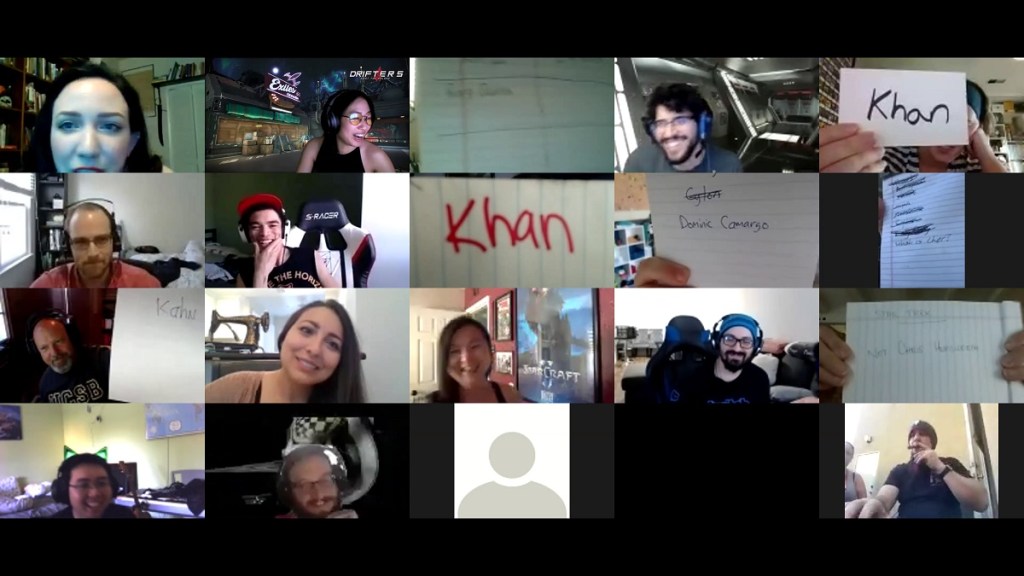 Above: Blind Squirrel Games employees are all working from home.

GamesBeat: Any other interesting things to mention today, ways to keep people entertained?

Hendricks: We’ve got the digital clubs. We’ve got the weekly meetup. We do the company update, and we’ll probably end up doing one more before this is all over with. That’s more of a general company-wide update. We’re performing all of our meetings that are done normally — we used to do stand-ups as a company, scrum planning, sprint planning, whatever. All those things are happening normally. Everyone is doing a hell of a job, and we’re still on track with all of our projects, which is amazing. We’re trying to keep people motivated, keep them engaged, keep them from going nuts.

Even the people who have families at home that are super busy, those people need time away from their families. They’ll close the door and come to beer Friday and have a good time. You’d be surprised how people need that. I’ve had a lot of people sending me emails saying, “I appreciate you guys doing this. I need this hour or two away from my family.” It’s sad and it’s cool at the same time.

Mach: We’re trying our best to make sure that new people and veteran employees all get to meet each other. It’s not a normal situation where someone starts at a company. They’ve never gotten to see anyone at the office face to face. We do our best to send out the newsletters and update people about new hires coming in, where they can come and socialize with them, what clubs and things they can join that are interesting.

We’ll do Squirrel Spotlights for people who want to participate, little stories about them. “Hey, did you know that so-and-so loves to knit, and they’re also part of this club, and they run this activity this weekend? Be sure to check all of this stuff out!” We send a lot of regular updates out on top of the social clubs and directories. We’re giving people as many channels as possible to find information and communicate and engage.