The news is in. Eighty percent of gamers eat or drink while playing games, according to market researcher Newzoo. I could have done this survey myself, as I’m sure that 80% of us eat or drink while sitting in front of a computer or using our phones.

But our broader consumption habits revealed in this survey are interesting, and companies can probably find an opportunity here with the nuances among different territories. Perhaps Electronic Arts and Activision would be better off launching a line of gamer-themed Frito-Lay chips than a retro sequel.

For instance, Western European gamers are least likely to regularly eat and drink during game sessions, with 73% regularly consuming while gaming. Asia Pacific gamers, on the other hand, chow down at their desks, with 84% of them eating or drinking while gaming. Within Asia Pacific, the markets with the highest shares of regular consumption are India (94% of gamers) and Indonesia (93%). On the other end of the spectrum, under two-thirds of gamers regularly consume in New Zealand (63% of gamers) and Singapore (65%). In North America, Western Europe, and Asia Pacific, more than half (55%) of gamers who consume while playing are men. Across all three regions, the group most likely to consume is male gamers ages 21 to 35. 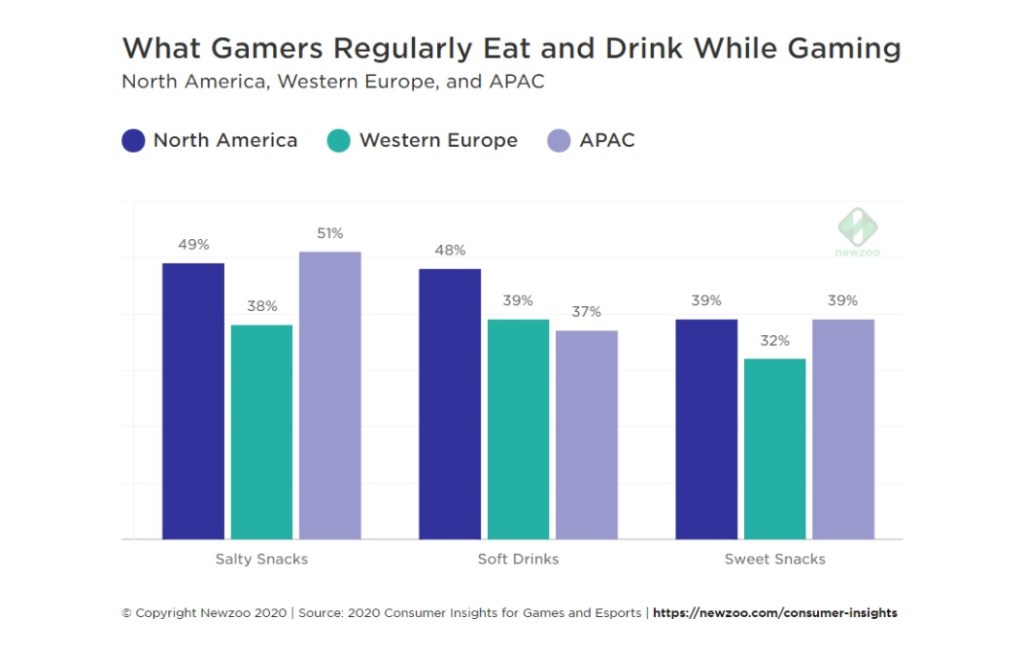 Above: Asia Pacific gamers are partial to salty snacks, while North American gamers like soft drinks.

Newzoo said it is worth noting that these gamers typically play more often and for longer, giving them more opportunity to eat and drink while gaming.

What do gamers consume while playing?

Gamers in North America and Western Europe have similar habits when it comes to regular consumption while gaming. Salty snacks (like chips and crackers) and soft drinks are popular in both markets, with soft drinks being slightly more prevalent in Western Europe and salty snacks taking the top spot in North America. (I guess that’s why we’re chubby).

The diversity of the markets within Asia Pacific led to some striking results. For example, “other drinks” (such as tea, coffee, tap water, etc.) are the most regularly consumed beverage or food in both Japan (39%) and Taiwan (51%) while playing. 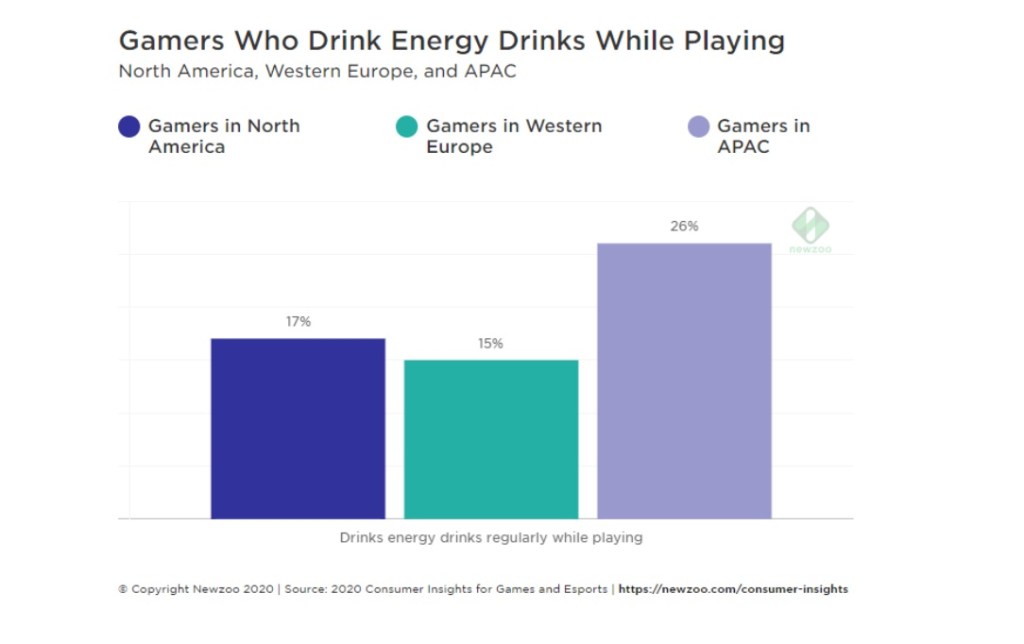 Above: You have to be awake to play games.

Together, these data points emphasize just how diverse these regions are—an essential consideration for any snack/beverage company looking to expand into gaming and market to gamers of different ages, gender, and in different locations.

The 31 to 35 age group is most likely to drink energy drinks while playing in both Asia Pacific (35% of the group consumes energy drinks) and North America (29%). In Western Europe, though, slightly younger gamers (age 21-25) are most likely.

Compared to non-gamers, gamers have a more positive brand attitude toward energy drink companies—in all three regions. The difference is biggest in Western Europe, where 38% of players have a positive attitude towards Red Bull vs. just 17% of non-gamers. That means Red Bull’s years of courting gamers with advertising and gaming event sponsorships has paid off.

Western Europeans: Bring on the beer

Among gamers of the legal drinking age in these three regions, regular beer consumption was a little more common among gamers in Western Europe.

Food and beverage brands are beginning to see the value of targeting gamers—especially when it comes to resonating with hard-to-reach consumers who are less engaged with traditional media.

Newzoo said 65,000 people were surveyed in the study as part of an ongoing, larger research effort to understand gamers.