Sega’s Creative Assembly studio gave a deep demo on the gameplay of Total War Saga: Troy, the latest installment in a 20-year-old real-time strategy franchise that has sold more than 20 million copies.

In Total War games, you can feel like you’re the general of an army on a battlefield, as well as the commander-in-chief of regional war in a turn-based grand strategy game. When two armies meet on the field, a real-time battle ensues, where you can zoom out to see the big battle or zoom in to see a single company of soldiers battling the enemy.

I’m looking forward to this game because it combines my love for literature (I read The Iliad back in junior high school) and military simulation (I’ve played the Total War strategy games since the first one came out in 2000).

The latest military simulation from The Creative Assembly takes us back to the Bronze Age and the Trojan War between Troy and the Greek allies of Mycenae. The game launches on the PC exclusively on the Epic Games Store on August 13, 2020. It will be free for players who download it in the first 24 hours.

While the Trojan War was a big one for the epic days, it’s on a smaller scale than other Total War subjects, and so it falls under the Saga nomenclature, as a smaller-scale game, as opposed to one that you might play for hundreds of hours. 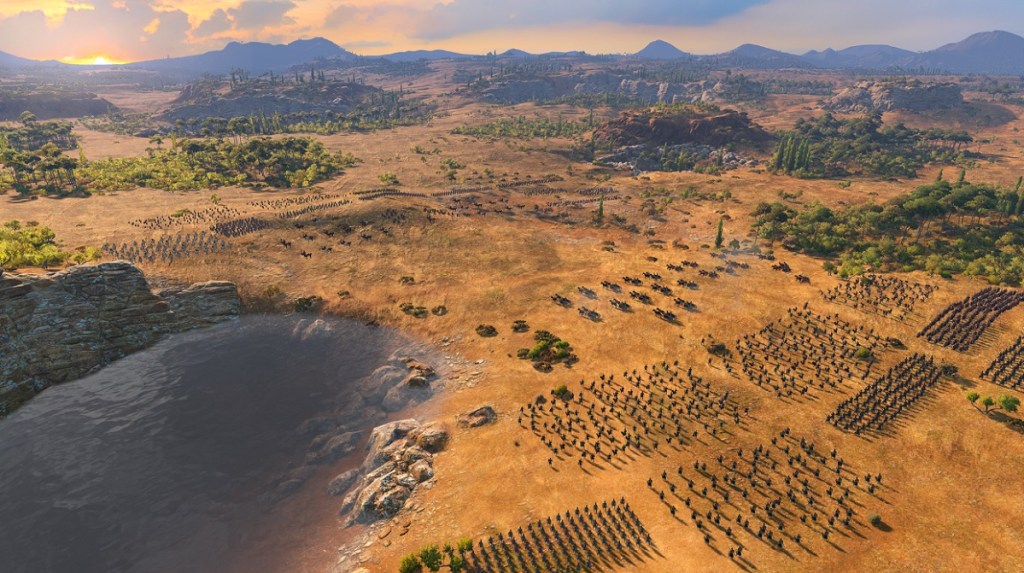 Above: A mythical battle becomes real on the plains of Troy.

Depicted by Homer in epic poem The Iliad, the mythical Trojan War began after Troy’s Paris made off with Helen, the wife of Spartan king Menelaus. The king appealed to his brother, Agamemnon, ruler of Mycenae, and they recruited their allies throughout Greece to bring Helen back.

Paris fled to Troy and sought the protection of his father, King Priam, and brother, Hector. Together, the Trojan army and its allies fought off the invading army of Greece for a decade, with the wider conflict lasting 20 years. Agamemnon’s force includes more than 1,000 ships of soldiers with spears, swords, and bows.

Odysseus, the wily king of Ithaca, conceived of the Trojan Horse, a parting gift that hid eight Greek heroes inside. Once the Trojans brought the horse inside, the soldiers slipped out at night, opened the gates, and the Greeks slaughtered the Trojans.

These events are captured in a more historical version of the battles around Troy on the plains of modern-day Turkey near the Dardanelles Strait and the surrounding Aegean region. The Greeks can fight before the gates of Troy or fight at nearby cities as well. Hector leads the Trojans, and Achilles, leader of the Myrmidons, is among the heroes of the Greeks. 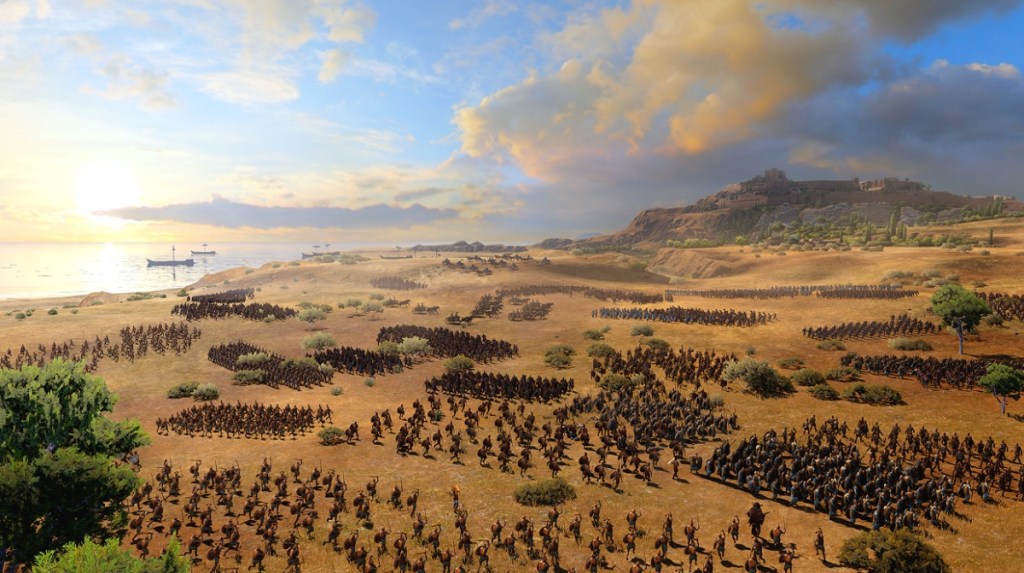 Above: The Greeks spread out in an advance on Troy.

You can play at least eight different heroes on both sides of the conflict. Those heroes can affect combat, stirring up the troops so they can fight longer or more bravely. They can also challenge each other to single-combat duels. If one slays the other, then the morale of the opponent’s army can take a huge dip. This is one of the innovations of Total War: Three Kingdoms, which was set in ancient China.

The developers also brought in mythical beasts such as the Minotaur, which has the body of a man and the head of a bull. In this case, the Minotaur is a huge human soldier wearing a bull’s head. He can stir up the troops and strike fear in the enemy using his Bull Rush.

Meanwhile, centaurs are mobile cavalry units which can harass and flank enemies with ease thanks to their ranged and close combat capabilities. They are masters of cycle charging — charging and retreating and then charging again — and they can rely on volleys of deadly projectiles to keep enemy units at a controlled distance. They are named after the half-man, half-horse beasts of Greek myths.

I like how this blends the heroism of Homer’s narrative into the military simulation of the army battles. You can win the war either way, by killing heroes and creatures or conquering the rival with your armies.

I like how this way of integrating myths into historical battles, as it makes for a more interesting narrative that guides you in the military simulation.

The noble Hector was raised from birth to lead his father’s armies, was feared by his enemies and could turn the tide of battle through sheer bravado and military cunning. Wearing an ornate bronze armor and carrying a shield, he wielded his mighty spear with skill and ferocity in equal parts.

Hector is well-suited to defensive players who prefer to gradually wear down the opponent before landing the killing blow. As a prince, he can also rely on diplomacy to forge a league of allies. His roster is focused on tough, heavy, and expensive well-armed units that can be used in frontal attacks.

Swift-footed Achilles, the legendary hero of The Iliad, was the mightiest warrior. His seeming invincibility in combat was the subject of myth and conjecture: Legend claims that his mother, the sea-goddess Thetis, granted him invulnerability as an infant by dipping him head first into the waters of the Styx. His army units have the largest number of unique soldiers.