Oculus Link is the feature which lets Oculus Quest act as a PC VR headset via a USB cable. This gives Quest owners who own a gaming PC access to the Oculus Rift library and SteamVR.

Oculus Link works differently to regular PC VR headsets like Oculus Rift S and Valve Index. For those headsets, when each frame is rendered, it gets transmitted, raw, from the GPU to the displays via DisplayPort or HDMI.

USB doesn’t have enough bandwidth for raw video frames at VR-suitable resolution, so Link works by first compressing (encoding) each frame. When the frame arrives at the Quest, it gets decompressed (decoded) by the Snapdragon processor. Since this encoding and decoding takes time, Link has higher latency than a “real” PC headset.

You don’t notice this latency when rotating your head because the Quest warps the decoded frame in the direction your head rotated since starting rendering — this is called TimeWarp. When moving your head or controllers around, however, the delay until seeing that movement in the headset can become noticeable.

One of the primary methods used to reduce perceived latency in VR systems is prediction. Before each frame is rendered, the system has to decide what position in the virtual world to use as the perspective. Since rendering takes time, the ideal position is where the user’s head will be once rendering is complete.

Prediction algorithms, sometimes hand crafted and sometimes powered by machine learning, try to determine where your head will be after that time. It’s based on the most recent position and factors like the current acceleration and past movement. 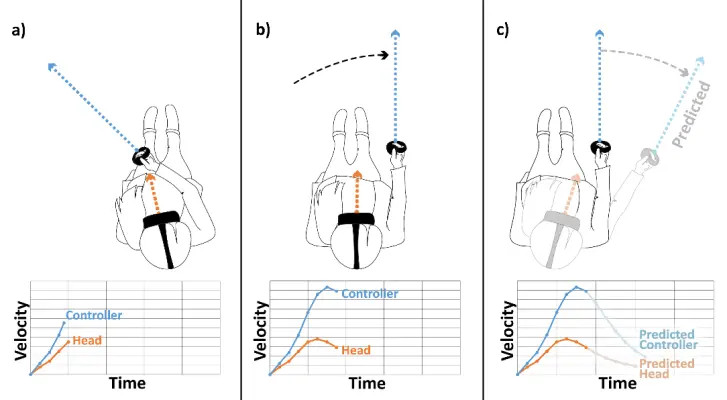 Since Link’s frames also have to be encoded and decoded, the prediction algorithm needs to look even further into the future than usual. Based on this patch note, it looks like Facebook tweaked its algorithms to produce more accurate results with this longer prediction interval. Facebook is a world leader in machine learning, but it’s unclear whether that’s related to this change.

v18 is currently available on the Public Test Channel. To opt in, navigate to the Beta tab of the Oculus PC app’s settings. You’ll see it start to download in the Library tab.

Toggling between v17 and v18, there is a small but noticeable decrease in the perceived positional tracking. That should come as good news to Quest owners now using Link to access the wealth of content on Rift and SteamVR.