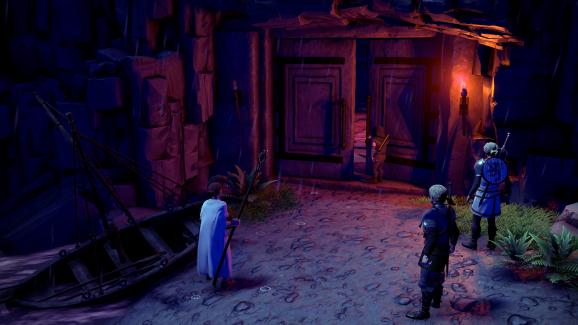 What adventure -- or horrors -- await our heroes behind this door?

The Dark Eye is one of those tabletop role-playing games that doesn’t get a lot of attention in North America. It’s known as the “Dungeons & Dragons of Germany,” and it’s spawned a number of PC role-playing games along the way (like The Blackguards series and Drakensang: The Dark Eye, an underrated release from 2009).

The Book of Heroes is a new direction for The Dark Eye. It’s a co-op role-playing game with real-time/pause combat, though you can play it solo with PC-controlled party members. Co-op is either online or local. It’s a standalone story and adapts the 5th Edition of The Dark Eye. It also focuses on eight smaller, procedurally generated storylines, not one epic story. With 12 professions and four species, Book of Heroes is more about tinkering with character builds and seeing how things turn out with different party compositions. At times, it reminds me of an old dungeon-crawler: Dungeon Hack, a 1993 D&D PC release in which you rolled one character and went into a procedural dungeon.

I’ve been tinkering with it, and Book of Heroes is far better as a co-op experience than it is solo, because you can’t give direct commands to your AI-controlled party members (which reminds me of Neverwinter Nights).

“The Orks are raiding and worshiping the Nameless One, and undead are rising,” Random Potion CEO and cofounder Kirsi Rossi said. “We have multiple plotlines to follow. We are a bit different — [other Dark Eye games] have one big epic story. We don’t have one single story, we have eight story to choose from. You finish one, start a new character, and start a new one.”

The stories are linear, she said, generated by what happens in the game. “You may be looking for assassins in hiding, so you have to figure out where they are hiding. A clue may be in Western Forest, so you go to the Western Forest. It seeds the game — no choices in traditional dialogue, so it takes into account what characters are in the party, if a mage, or a dwarf, and it generates it for the characters.”

You hire pregenerated companions when playing solo, and as you play, you unlock more. This disappoints me a bit, as I enjoy being able to control all characters in an adventuring party. Rossi said that just didn’t gronk with the game they’re making.

“First and foremost, this is a multiplayer game. It didn’t makes sense,” she said. “You can actually mix single-player or multiplayer, however you want. You have to choose first. Just mix them how you want. It’s not a traditional game — you can play the same character in single-player and multiplayer. It doesn’t make sense to have multiplayer characters to control.”

Above: I dig the presentation of character sheets in The Dark Eye: Book of Heroes.

Rossi said that some of Random Potion’s ideas for The Dark Eye come from The Secret World, an MMORPG that launched in 2012 in which the player would need to change their characters to react to the world as they leveled up.

“Our original ideas are really old. Some come from years ago, some from The Secret World MMO back in the day,” Rossi said. “For us, it was how we could build a game that reacts to the character — we wanted to do a multiplayer game that’s easy to hop in-and-hop out. We’re all getting older and don’t have as much time on our hands, and there’s not many RPGs without you spending tens of hours [playing].”

Each playthrough should take five or so hours, so Random Potion wanted to make this a game with lots of replayability. “If you die in adventure, you lose progress, but it’s so short, it’s 30-40 minutes, so you start again,” she said. “You lose progress in the current adventure, not your whole progress.”

Why start with Dark Eye?

The Book of Heroes is Random Potion’s first game. It feels like an odd place to start, given that The Dark Eye isn’t as well known outside Europe as it is there. But an RPG isn’t good just because of its license: It needs a mix of good systems, narrative, replayability, and so on. And The Dark Eye is a good fit for that. Its profession system enables mixing classes. Your mage can soon become a fighter-mage.

“A bit before we started, we talked about founding a new company. We pitched origins of this idea, and the feedback was overwhelmingly good. And here we are,” Random Potion creative director and cofounder Arto Koistinen said.

This aspect of the game — the mixing-and-matching of professions — together with the replayability make for an intriguing game. It’s another example of just how expansive PC game development can be, though with local co-op, I bet Book of Heroes would also find an audience on console as well.