I’m fascinated, and a bit confused, when it comes to the fantastical world of The Waylanders. The turn-based role-playing game comes from Gato Salvaje, a studio from Spain’s Galicia region. That’s important, because The Waylanders features a world full of Celtic influences, and Galicia’s people have a Celtic origin. The game also has aspects of Greek and Egyptian cultures. And it has time-travel, and those sort of stories can always get confusing.

The Waylanders hits Steam Early Access on June 16. Early Access is an important tool for PC studios, giving players a chance to not only get a taste of the game but provide feedback as well. The developers then take that feedback and fix bugs and other issues, adjust unbalanced systems, tighten up narrative, and more. Smaller developers, like Gato Salvaje with The Waylanders (a Kickstarter project), also use this model to help fund their games.

This world not only shows a number of cultural influences, but you can see how Star Wars and other games play into its systems. Magic, the studio said, is like the Force in how certain individuals have an affinity for it. You can forge properties on items and weapons as well. Combat has a number of different formations that can make battles vary from one to another, and players can dabble in a number of subclasses from the main fighter, pathfinder, and sage paths.

But at its heart, The Waylanders is an exploration of how cultures mesh; how lives play out over centuries, sometimes in different bodies; and how your character and party react to all of this as you discover the mystery behind why reincarnation isn’t working as it should.

The Celts of Spain

I wanted to learn more about this mix of influences and cultures, so I talked with Gato Salvaje’s Fernando and Sergio Prieto, the brothers who are part of the forces driving The Waylanders’ development.

“The question of influences [is interesting] because the game is based in the book of Lebor Gabála Érenn of Celtic people who invaded Ireland in the 5th century before Christ,” Fernando said. “It tells of how one of the people went to Ireland, and one of the characters was married to an Egyptian woman, Scotta. That woman, the legend says the name of Scotland is based on her name, and that her husband, son of the legendary Beran, had learned his skills with Greek mercenaries before he went to Europe … this is why we have those influences from Greek and Egypt as well.” 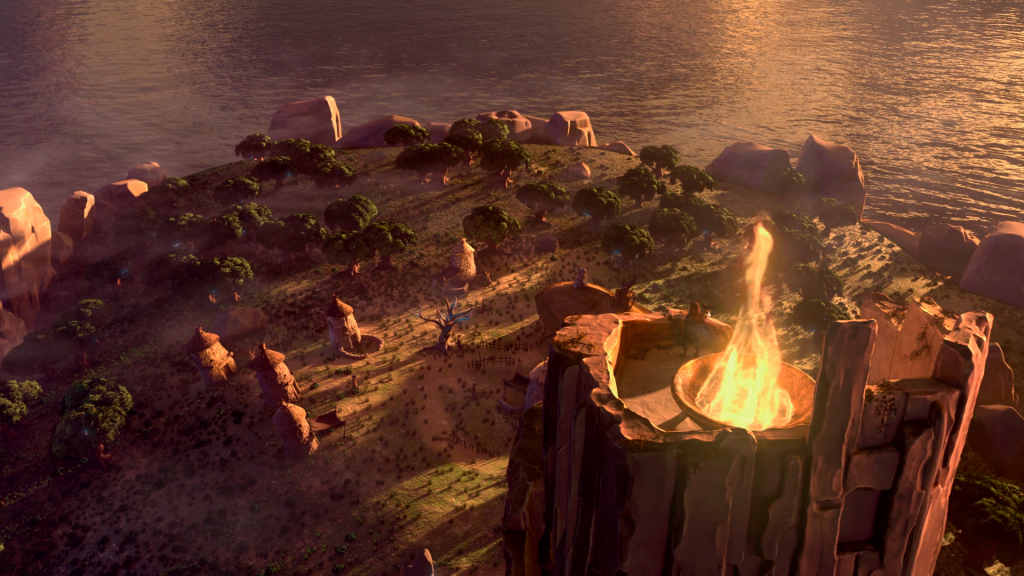 Above: Brigantia is the capitol of Kaltia, a human realm.

It turns out this blend of cultures is something Gato Salvaje has wanted to do for some time. Fernando told me about the Santiago de Compostela Cathedral, a pilgrimage site since the Middle Ages. It also has ties to Galicia’s Celtic roots.

And this is how it factors into The Waylanders’ setting.

“Our main character travels to the island in the beginning, and the king will die, and the main character will find himself in the middle of time. He will be the only one to travel between Middle Ages and the Celtic period,” Fernando said. “From a narrative point of view, Celtics believed in reincarnation. You have companions at the beginning of the game, and you have to find them in the Middle Ages and wake them up, but they will be different characters; they will remember themselves when woken up — themselves from the Celtic period, but be different people; a warrior in Celtic era may be a housekeeper in the Middle Ages.”

It’s the sort of setting I don’t recall playing in a game before.

“We think the same,” Fernando said.

“It was the end of 2016. We were having a hard time as a company, and we developed smaller games, adventure games, to survive. We needed to make bigger games,” Fernando said. “We had an idea for an RPG based on Celtic culture, the Galician culture, influenced by what people with CD Projekt did with The Witcher, because they did something similar, used their own culture and the legends of their country to build a fantastic story and playable and enjoyable all around the world. We thought we could do something similar, take our cultural background, use it in a story, an RPG, and to grow it into a story and tell it worldwide.”

Gato Salvaje (which means “wildcat” in Spanish) got to work on The Waylanders in 2017. Fernando said at that time, the studio had just eight people. But Galicia doesn’t have a game-dev culture, so instead, the team decided to train folks to make games.

“We convinced the city council [to start] courses on video games and trained our own people. We took people from university — programming, animators, communications — and we gave them two courses, trained 75 people, and after that, we selected the best to work on the project.”

They also talked with noted RPG writers such as Mike Laidlaw (Dragon Age, Mass Effect) and Chris Avellone (Fallout, Planescape: Torment, and a host of others). They ended up recruiting both for their project. Their pursuit of Laidlaw started about an hour after he announced on Twitter that he had left BioWare.

Update, 1:13 p.m. June 22: Gato has parted ways with Avellone over allegations of past sexual misconduct. 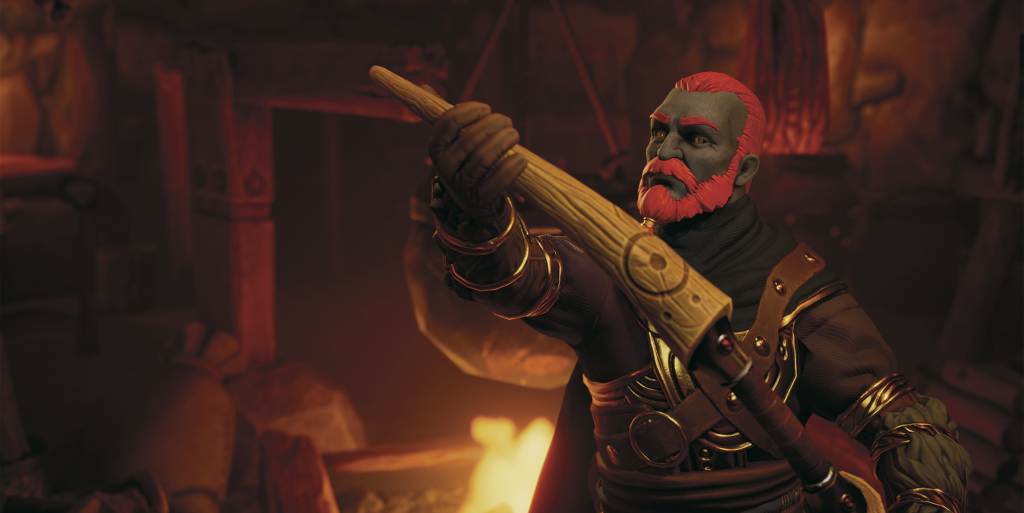 Above: Berath’s wisdom and long life factor into The Waylanders and your journey.

One of the key aspects of The Waylanders is how characters’ lives play out, such as being reincarnated and reawakening … or just being immortal. According to the brothers, time travel and the timeline is the core of The Waylanders’ story — including the companions’ character arcs. I wondered how all of this interplayed, especially with time travel. Take Berath, a Mourian who’s one of your companions. He’s immortal. Others, such as the Fomorians, have lifespans hundreds of years long, and because of how they’ve been exiled and later hunted as monsters, they have plenty of time to plot.

“Immortals are part of Celtic culture, the Fomorians especially,” Fernando said. “They had to be a constant to guide the main character between ages. Also, the Fomorions are a common race between the Irish legends and Galician legends as well. The Fomorians aren’t really immortal — they live hundreds of years, but not immortal.”

I wondered why Fomorians would be in the party, considering their dark backgrounds. 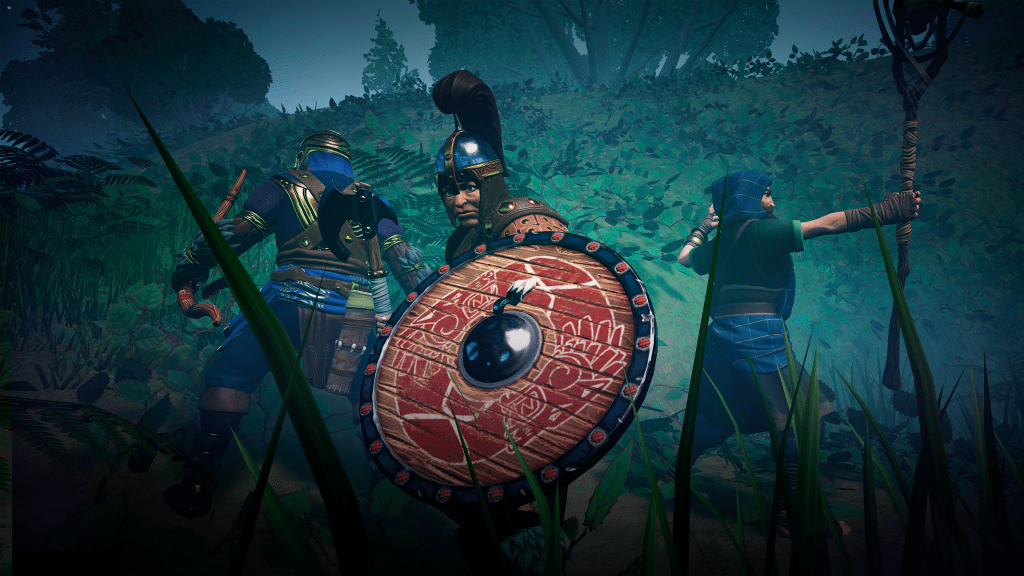 Above: Formations play a role in The Waylanders’ combat.

“Because they are incredibly powerful!” Sergio said over email. “Delba [a companion] will not be able to be part of a formation, but her strength alone will be more than a usual character. If we are talking from a story point of view, Delba is part of a bargain made in the Underworld where the player agrees to add her to the group in exchange for … well, you’ll find out soon.”

Werewolves, too, are part of Celtic culture, and you’ll find them in The Waylanders.

“They are relevant in our legends, in the forests, so we wanted to use that as an allegory for their relations,” Fernando said. “Our werewolf companion is romanceable, all that complexity of romancing a werewolf woman, they have been a part of our culture.”

The Waylanders also has a number of older characters, a welcome inclusion.

“In all ages, there was a respect for the knowledge of old people, so we wanted to get that as well,” Fernando said, noting they wanted to show elders who were not just active warriors but desirable as well. “Brig and Beralth, they will have options to have romances as well. The romance is an important part. We wanted to use old characters because they give more depth and complexity. We thought it was good not to use just young characters, strong and happy and handsome people. We wanted to use every possible relation to characters.” Above: Magic is key to The Waylanders … but the magic of reincarnation isn’t working right.

Reincarnation is a crucial part of The Waylanders.

“The story begins in Celtic legends, begins with the moment in Ireland and travels to Galicia. Something is going wrong with that travel, and that thing that happens will trap the character between life and death,” Sergio said. “In Celtic myths/religion, reincarnation is very important. They didn’t think about death [as the end]. … The character will be trapped between life and death, so he will be the only person that won’t be able to reincarnate, so that will be the first thing [to figure out] — a corruption in magic that ‘killed’ you, and all the things that go wrong.”

Digging into the lore, how Celtic traditions connect Galicia and the British Isles, turned out to be a journey for the brothers.

“We know of connections with music and folklore, and I know some of the legends, but when I really learned about it was when I dug into the lore on the story of the game,” Sergio said. “I investigated a lot about our legends and our story, and it was incredibly funny that these legends, the founders of Ireland are from here, because that legend … not a legend from Galicia, but from Ireland, but the legends are not only from here. … I found that these legends [are in] other countries.”

“The more you investigate, the more you realize we have relations [with other cultures]: names of cities use our main language (Galician) invented from Roman. We took their language; we have a dialect from the Latin language. We have a lot of names, especially names of hills and mountains, that are similar to the Irish one, because centuries ago, our language is similar.”

I’m looking forward to seeing how these cultures and systems interact as I play more of The Waylanders.