GamesBeat: It also gives the players a bit of choice, besides just what gear and what powers they select.

Andrea Roberts: I really like being able to plan out a bit. You don’t know exactly what’s going to be in the run, but you can look across the map and get a sense of, well, “depending on what kind of equipment I have right now, I might be really strong against spiders and poison, so I’ll go that direction, or maybe I’m weak against it so I’ll avoid it. I see a treasure room coming up so I’ll try to angle my way over there.” I like that kind of planning.

Bob Roberts: Yeah, medium-term decisions you can reach out for.

GamesBeat: When it came to the monsters, how did you settle on their design? Some of them are adorable. The skeletons have a really cool look to them. The ogres look like grumpy old men.

Andrea Roberts: I don’t know how obvious it is, but we have a huge love for D&D. We’re big RPG nerds. We realized that we were doing something kind of wacky like this, this mash-up of Peggle mechanics with this — I wanted to keep it fun and light and joyful. For people who have loved Peggle, I wanted it to be something that they would feel comfortable and in love with. It’s the kind of game that I want more of in the world. I also really wanted to speak to the RPG-ness and that fantasy nostalgia that we all share. It sprung out of that. And plus there’s just something inherently ridiculous about the fact that every character needs to be round. They’re inherently a little chibi, a little cute because they have to have that shape. As we talked through different enemy concepts, a lot of it came from those roots of, “What are those classic, cool D&D RPG kinds of monsters you would expect?” And then I would just doodle them round. Also, the pegs are fairly small on the screen, so I wanted them to have enough personality coming through. That meant their heads were all really big, so you could see them as much as possible. You pointed out that the ogres are all grumpy old men. As we were working on all the characters, I liked to think of them in these — “How would I want to write them, and what sort of goofy tropes could I play with?” The game is, overall — it’s pretty silly. Playing with those sorts of tropes is a lot of fun, I think. It’s definitely thinking about — I think of the ogres as grumpy old men, and —

GamesBeat: How difficult was it to come up with the hero abilities? This kind of game is different. The heroes of Peggle had their powers, but it’s very different than what you’re doing here.

Bob Roberts: There’s the hero abilities, which had their own goals in mind for distinguishing the three classes. We were trying to think of ways to play around with RPG mechanics and what worked with classic Peggle stuff. And then there’s also just — under the hood, the enemy abilities are using the same data structures as the hero abilities. There’s a ton of additional things to come up with for the enemies, and on that side of things it was more in that classic roguelike feeling of trying to design stuff that people can experiment with and learn over time and grow into a sense of mastery over the game by amassing knowledge about how everything works. But with the hero abilities, there’s a different — it’s more about fitting their personality and finding those play style tropes too.

Andrea Roberts: We always had those breakdowns of who we wanted the warrior, the rogue, and the wizard — what kind of play style we wanted them to match. That was definitely the filter that we were looking through as we designed the skills.

Bob Roberts: The warrior is smashing his face into stuff and bashing around. That was, “OK, he’s going to have to be able to carve through barriers, versus working his way around them.” He gets the spin attack that lets him break through stuff, and the charge attack also lets him cruise right through the pots. He’s about flinging himself straight into the face of the monsters, whereas the other two are a little more about avoiding actual face to face contact a lot of the time. 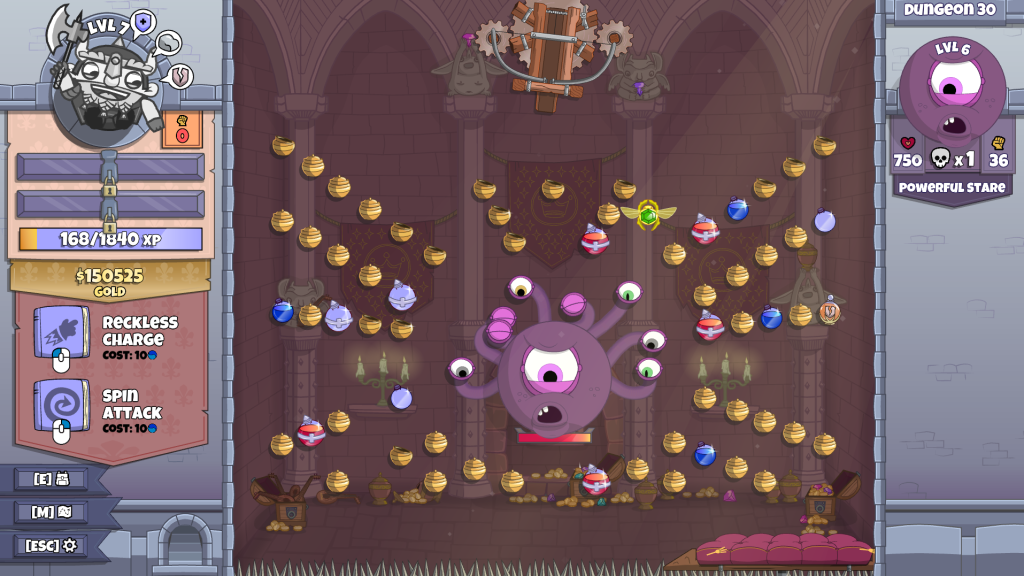 Above: I’ve got my eyes on ya!

GamesBeat: It feels like a game that’s really well-suited for a group of people sitting in front of the TV and sharing the controller.

Andrea Roberts: Absolutely. That’s always been one of the goals. We started on PC development, but I’d always wanted to get on consoles. Bob and I have — we pretty much first met and bonded over playing games together on the couch. I have such strong fond memories of being a kid and playing with my siblings and my cousins. I think that’s an experience that has always been deep at the heart of who I am as a gamer and that I want to support. I always thought of the game as something that feels good to play by yourself, but also with other people. A lot of the design has gone into the UI on the sides and callouts and things like that, to try to help make it clearer for a watcher what’s going on. You can have more of that conversation with somebody.

Bob Roberts: Somebody can walk into the room and pick up what’s happening by looking at the screen a little bit.

GamesBeat: How many copies do you need to sell to make this a success?

Andrea Roberts: Well — we’re on a bunch of different platforms. We’re selling the game on Steam, Xbox, Switch, PlayStation 4. But we’re also on Apple Arcade, and so part of being on Apple Arcade is that Apple helped support our development. That was a really huge deal for us. That’s what has enabled Bob and I to work full-time on this project.

Bob Roberts: They gave us some funding and took a lot of the risk out of that question for us. It’s been really awesome. And also, frankly, every time we showed it at PAX or a show like that, we got a ton of people asking if they could play on their phone or iPad. It was a good way to embrace the feedback we’d gotten and try to make it work on all of those platforms. It’s a more comfortable, less stressful question than it would have been had we not hooked up with Apple and made it for Arcade.

GamesBeat: Are you going to make another game after this?

Andrea Roberts: We’re going to continue supporting and working on Roundguard for a while. We have plans for — we want to get daily runs in there. We have new character ideas. We’re definitely going to put out more content for Roundguard, and we’re a small team, so that means we won’t be immediately working on the next thing. But we will be doing something after that. We just don’t have an idea quite yet.

Bob Roberts: The goal is definitely to keep making games together, but Roundguard is still our current foreseeable future.