Gamers and movie watchers are binging on entertainment during the pandemic, and U.S. game companies and streaming movie services are vying to sign up consumers, according to Deloitte‘s 14th annual Digital Media Trends report. This data is a clue to habits being formed during lockdown, but the question is how long an expanded interest in gaming is going to last.

“We saw a surge in esports in terms of virtual games and virtual sports during the pandemic,” said Kevin Westcott, the vice-chair and leader of the U.S. telecom, media, and entertainment sector at Deloitte, in an interview with GamesBeat. “Do those become permanent parts of the entertainment package that people consume at home? Or is that really just a phenomenon of being locked at home and they had to find alternative entertainment? I expect that at least some portion of that will continue. We’re going to be watching very closely.”

“A lot of this new generation is binge-watching content,” Westcott said. “And the social aspects of gaming have been increasing. People tell us they play games to connect with their friends and family.” 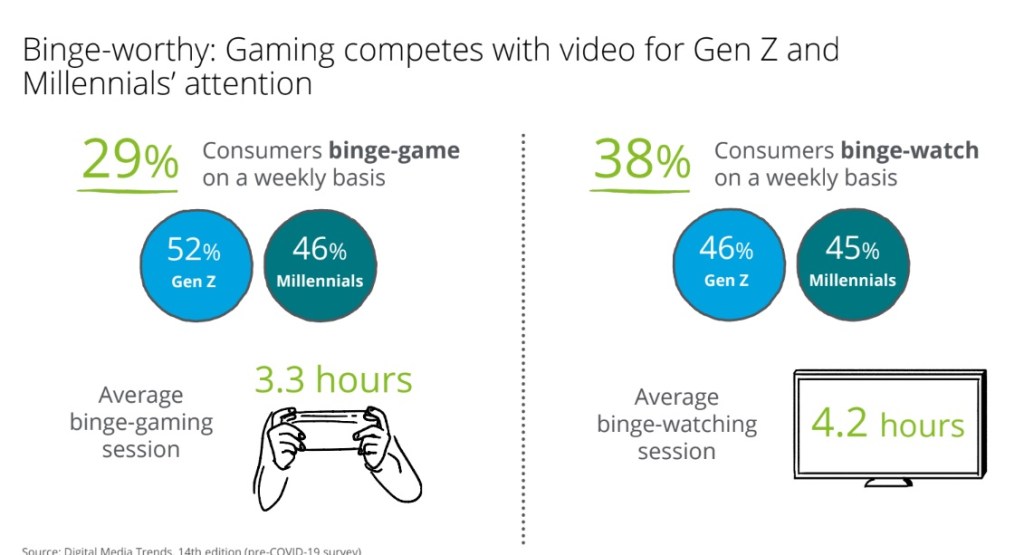 Above: Gaming vs. video streaming in the pandemic.

Earlier this year, 24% of consumers surveyed listed playing video games among their top three favorite entertainment activities. For Gen Z and millennials, it was 44% and 37%, respectively.

But since the crisis began in early March, nearly half (48%) of U.S. consumers have participated in some form of video gaming activity. For millennials it’s 69%, while for Gen Z it’s a whopping 75%. And 29% of U.S. consumers said they are likely to use their free time to play a video game rather than watch a video.

Seven percent subscribed to a video gaming service for the first time during the pandemic. Among those participating in video gaming activities during this period, 34% are playing more video games at home with their families, and 27% are playing to socially connect with others.

Deloitte surveyed 2,103 people in January and 1,101 consumers again in May to compare pre-COVID-19 numbers with sentiments during the pandemic. By the second survey, nearly 95% of the U.S. population had been under “shelter in place” orders, business activity had been widely restricted, and more than 20 million people in the U.S. had lost their jobs. 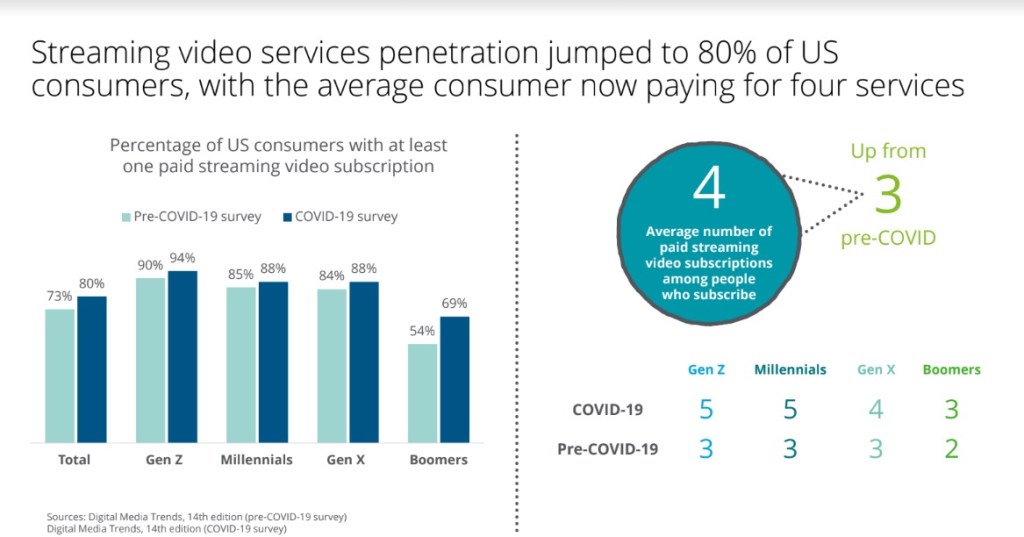 Above: The average consumer now has four streaming video subscriptions.

At the end of 2019, consumers were loading up on paid media subscriptions and sampling free services. They subscribed to an average of 12 media and entertainment services while also seeking more free and subsidized entertainment, such as ad-supported streaming video. With so many entertainment options, competition to attract and retain customers was fierce, and costs, competition, and subscription fatigue were already setting in.

Signups accelerated during the pandemic, as people found themselves in lockdown with more time on their hands. But COVID-19 has also accelerated cancellations as people face loss of income and economic uncertainty. While it’s too soon to say what trends will look like after lockdown, consumer choices today could shape the industry for the next decade, Deloitte said.

“The No. 1 reason people actually sign up for a service is for some exclusive content,” said Westcott. “So they’re chasing content someone has told them about. They go sign up for that. But then during the COVID-19 crisis, the No. 1 reason that people actually canceled services was either costs or the free trial ended. We continue to see a lot of new subscribers, but also we continue to see quite a bit of churn.”

Westcott said media consumption is now more fluid and round-the-clock. Customer acquisition has accelerated, especially in paid streaming video, music, and gaming subscriptions. People have more time on their hands to watch, listen, and play games, and they are adding services to get new content. Social viewing, livestreaming, and first-run movies that release directly to digital services have all shown strong engagement during shelter-in-place guidelines.

At the same time, it is harder to keep customers. Introductory offers of free or reduced rates, along with compelling original content, are attracting subscribers. But these subscribers are likely to cancel the service if content dries up and they can’t justify paying the full price. For instance, people might subscribe to Disney+ to watch The Mandalorian. But once they do so, they may quickly cancel.

“My expectation of the evolution of the streaming platforms is we will end up with a handful of dominant players who not only have their own exclusive content, but they’ll aggregate a lot of content,” Westcott said. 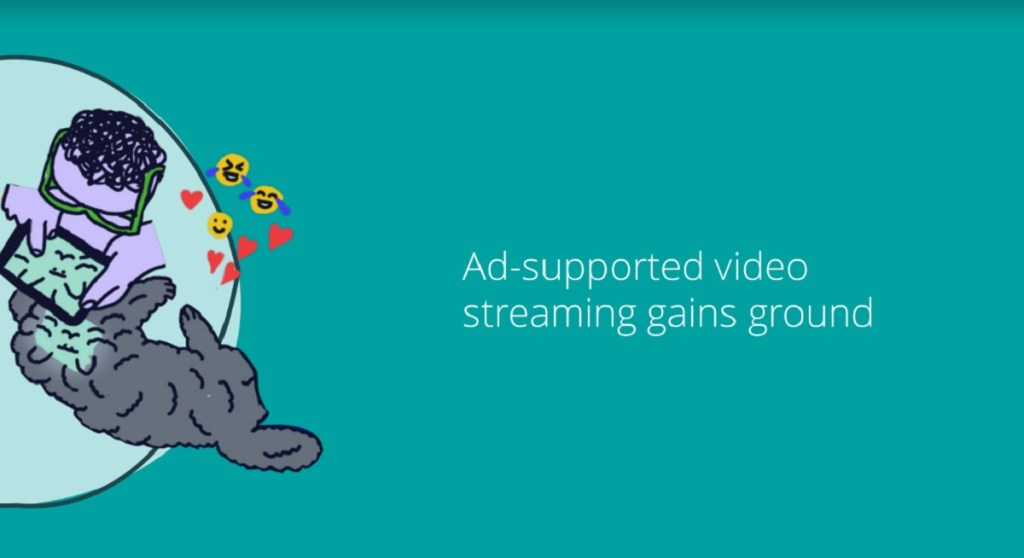 The emergence of free, ad-supported alternatives makes it even more critical for subscription services to deliver value, especially since they’re up against growing competition from livestreaming video services and video gaming, Westcott said. Cost is a big issue here — 39% of COVID-19 survey respondents reported a decrease in their household income since the pandemic began.

These consumers have been adding and canceling subscriptions in search of entertainment and savings. For example, 20% of U.S. consumers made changes to their streaming music subscriptions: 12% added at least one service, 5% canceled at least one, and 3% added some and canceled others. This means they’re searching for new entertainment but staying conscious of costs, Westcott said.

Subscribers now have an average of four paid streaming video subscriptions, up from three in the pre-COVID survey. Not only do more consumers have streaming video services, the average streamer pays for more services than ever. However, as more media providers join the fray — including Disney+, Apple TV+, and HBO Max — competition is putting pressure on content and pricing.