GamesBeat: What did you consider to be the most fun, and why?

Hall: They’ve all been fun, awesome experiences. Maybe the craziest part was when we first got a check for Commander Keen and realized we could make games for a living. But we were also on a death crunch for years and years. It was great because we loved making games and we were young, but there’s something to be said for work-life balance. I’ve enjoyed every period because I’ve always tried to seek new challenges instead of sitting down. You talked about the variety of games. I like finding what’s cool and new each time, so there’s always a new challenge and I’m always learning.

GamesBeat: Do you feel you eventually hit that work-life balance?

Hall: I think so. The industry is maturing a bit. I still have that in me. If I’m going to sleep and I think of an idea, I’ll stay up and write it out. But it’s by choice, not because of the system. 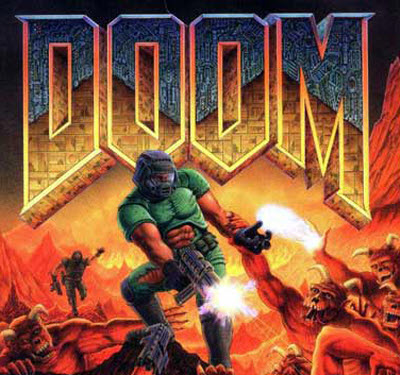 Above: Tom Hall worked on legendary shooter titles like Doom.

GamesBeat: It doesn’t feel like we’re at a place where people are accepting all gamers and all games as “real,” I guess. I feel like we still have a ways to go to get there.

Hall: Some gamers are reacting to these new kinds of games. “Oh my gosh, this rock-‘n’-roll music is horrible!” But people enjoy these kinds of games. They’re having fun. They’re taking a break. You give them something they can pick up and let them have fun.

GamesBeat: What was it about Resolution Games in particular that was attractive?

Hall: As I said, with VR and AR, and Mike Booth coming on board, that was interesting. A friend mentioned they were making some cool games. One of the Anachronox team, Henrik Jonsson, is in Sweden working there on Amplifier Game Invest. He said that these were good people. I had a programmer friend who said they were making some cool stuff. I already had Angry Birds VR and AR, so I knew these were solid, polished titles. We kept talking, and it made more and more sense. I want to get in that forefront, changing the nature of what’s possible. This is a good marriage of talented, top-tier VR and AR developers. They just won an award for Angry Birds. What doesn’t make sense? I’ve been a passionate VR and AR guy for many years, and they’re making great games.

GamesBeat: As far as where VR is now and where you think it has to go — it still needs to find more of a mainstream audience. What’s going to get it there?

Hall: I liked what John Carmack said about Oculus Quest being in the Switch area of adoption. I think that’s smart. Weirdly, my former cofounder and I are working on a device that he brought into being. That’s been cool. These are all stepping stones toward AR being woven into our lives and VR having the potential for emotional connection, virtual connection. The pandemic is showing us a time where everyone is virtual. That would be more powerful altogether.

Everything is marching forward. Devices are getting more advanced. Control is getting more advanced. We’re hitting a sweet spot now where people have voiced what they want out of the experience, six degrees of freedom and all that. We’re about to see more mature stories told in VR. Jon Favreau did a great title, Gnomes and Goblins. It’s a movie-like experience. He took that experience and directed a digital movie in VR with the Lion King. It allowed him to be in the scene, to see the shots.

All these things are starting to click and elevate what can be done in the real world, what can be done in digital entertainment, and what can be done in VR. We’ll see that mature and broaden as creators make really touching things. You could see the artistry being applied to this new medium. You had Bjork making this wonderful video where she’s dancing around you. So many experiences are possible, the expression of an art piece into a new art form, a new medium. We’re learning how to use this first-person experience in bold new ways and convey more meaning to the player or the viewer.

It’s all very exciting. Each device and each step forward are marching toward a wonderful future where that’s possible. Whether it’s the Oasis, or whether we just use this as a connection so we feel like all the team members are all in one spot — it allows an experienced person to operate remotely. It’s going to be infused in our lives, just like AR. Being someone that determines where that goes and how it grows is exciting.

GamesBeat: What sort of role do you have within the team? How do you like to work in terms of team size and so on?

Hall: My official title is senior creative director. It’s interesting because Sweden is like, “Well, we have to figure that out.” We have people on the team that have 25 years of experience, and they’re just “game developer.” It doesn’t matter as much, culturally. But it’s cool. The teams tend to be smaller and more experienced, which matches my style. At id, we were all experts in our lane. We did our stuff. “OK, I need to know this, and I need to know this. OK, do it.” We’re working the same way here. We come up with a bunch of stuff and link it up. It’s surprisingly effective and wonderful.

GamesBeat: Did the team at Glu wind down, or did you decide to leave on your own?

Hall: It had been seven years. I just thought it was a good time to explore. I’d learned all I could learn there. It was time to move on and explore somewhere else. This is a perfect destination for that. They were all amazing, almost above every other team I’ve experienced before. They were a real family. It was special. But I thought it was time to do it.

GamesBeat: Are you still based in San Francisco?

Hall: The cool thing about this is, since it’s remote, I can be free to — if I want to move on with my family I can do that. But it’s wonderful to have that remote working. In this pandemic, everyone is in it, but it’s nice to be able to do that. Once the air clears, I’m sure I’ll be hopping over to Sweden once in a while. But for now, it’s fantastic.

GamesBeat: As far as making games during the pandemic, it seems like it’s still possible.

Hall: It’s very natural. We don’t have any watercooler conversations, but it’s almost easier to ping people on Slack or do a quick video call. It works very well so far. It’s been a fantastic experience getting to know Tommy and the team, everyone there. It was surprisingly nice and natural. “You’re doing great stuff, I’d like to work with you.” “OK, let’s do this.” I respect the games Resolution has made, and I can’t wait to join forces.

Hall: I just hope it results in a kinder, gentler game industry. That’ll be a good thing.