It was easy to get into Magic: The Gathering when I was 11 years old. The air was crisp, and the leaves were turning, as September 1994 rolled into October. The game was taking over my schoolyard thanks to Ms. Dierdre Lukyn, the coolest teacher at the school. Like any young soul who wants to be part of the action, I bought a starter pack and some boosters and mashed my favorite cards together with some lands. I didn’t know what I was doing. But it didn’t matter. Nobody had any idea about how to build a good deck. Competitive play didn’t exist then the way it does now. Nobody cared. We were kids falling in love with a unique card game that made us feel like wizards.

Over 25 years later, Magic remains a mainstay in my life. I still play games against those same schoolyard rivals. I follow the news daily. I’ve played in tournaments, and I watch my favorite players stream the game. More than Tolkien, more than Final Fantasy, more than anything else, Magic: The Gathering turned me into a fantasy fan.

It’s always been easy to get into Magic, and the latest effort to reach new audiences is Magic: The Gathering — Arena, and it’s creator Wizards of the Coast’s most ambitious digital product since 2002’s Magic: The Gathering Online. Arena is the latest in a long line of digital Magic products that have attempted to bring the gameplay of the original paper game to computers, game consoles, and phones.

In June, less than a year after entering its open beta phase, Arena celebrated its one billionth game played. A billion. That’s a big number, but it’s a drop in the bucket compared to the number of games played in tournament halls and around kitchen tables since Magic’s original release in 1993. But the relationship between digital and paper Magic isn’t competitive so much as symbiotic.

“The digital versions of Magic have all had a positive impact overall,” Chris Cao told me when I spoke with him for this piece. “They help drive more engagement of the core brands, increase play activity and broaden awareness for the game. We also think they provide vastly different experiences, each with their own strengths.”

Cao is the executive producer of Wizards’s internal digital game studio. His job is to focus Magic’s development, operations, and expansion over multiple digital platforms.

Above: The Sol Ring is an iconic Magic: The Gathering card from its first set in 1993. It’s received many reprints.

Like any product that’s survived multiple decades, Magic’s 25-year journey is full of world-class successes and almost catastrophic missteps. But if there’s one thing that never changes, it’s Wizards’s willingness to experiment and push forward, and their ever-present mandate to make the game as broadly accessible and appealing as possible to players around the planet.

History is best told by the people who experienced it, so I’ve connected with pro players, Wizards of the Coast staff, journalists, and content creators who have devoted their lives to this wonderful game. Join us as we dive deep into the history of Magic: The Gathering’s digital ambitions.

To find the beginning of this digital journey, we have to travel way back to 1997, just four years after the release of the game’s ultra-rare Alpha edition.

“I’ve played way more digital Magic over the years than paper Magic,” Saffron Olive told me when I asked him about his history with the game. “While I started off as a causal paper player a long time ago, as I became more interested in Magic, I started playing more and more Magic Online,” he said, referring to Magic’s long-running online client, Magic: The Gathering Online (MTGO). As Saffron Olive began producing more video content, he moved even further away from paper Magic “since digital is way, way easier for video production and streaming.”

With his jubilant beard and infectious laugh, Saffron Olive, whose real name is Seth, is a writer for MTGGoldfish, a noted Magic site with articles, videos, and decklists, and one of the community’s best known “brewers”—players who find enjoyment crafting and playing creative decks, rather than chasing the “meta” decks popular with competitive players. From his home in upstate New York, he can be found daily streaming some of the most unique decks the game has to offer.

Like Saffron Olive, I play more digital Magic these days than paper Magic. I got back into the game around 2013’s Dragon’s Maze digital and paper expansion set, just after a period of major growth for the game during 2009-2012, which Hipsters of the Coast‘s Rob Bockman attributes to a “digital-driven surge of popularity.”

But it took a long time for digital Magic to catch on the way it did during that period. 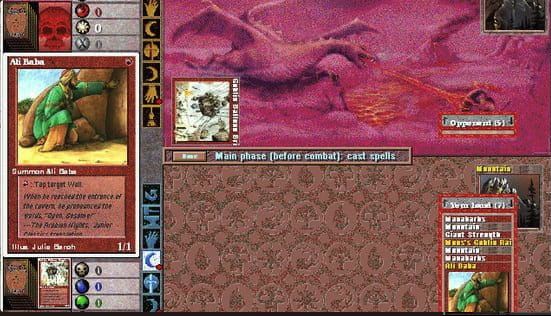 Above: Magic’s earliest digital incarnation looks far different than what we see today.

Wizards of the Coast and MicroProse awkwardly ushered in Magic’s digital era with the release of 1997’s Magic: The Gathering—colloquially known as Shandalar. It was a bit of a Frankenstein’s monster. Unlike most of Magic’s future digital offerings, Shandalar wanted to do more than mimic tabletop gameplay, instead borrowing many elements from role-playing and adventure games. Random battles played out like typical Magic games, enabling the player to improve their collection by winning “ante” cards (each player bets a random card from their library at the beginning of each match; winner takes all.) Not completely forsaking the game’s tabletop roots, Shandalar also offered a “duel” mode that pitted players against each other in a more traditional game of Magic.

An expansion called Spells of the Ancients debuted in 1998 and included game engine, AI, and interface improvements along with new cards. A special edition combining the base game and the expansion, plus new cards and features, was released the same year. In August 1999, MicroProse announced a robust new edition of the game with many new features called Gold Edition, but it was not released before the company folded in 2001.

Shandalar earned a special place in the hearts of Magic players as the first attempt to emulate the paper game in a digital format. Twenty years later, it stands as a relic of its time, an interesting forebear of later forms of digital Magic. It’s a bit of a cobbled together mess, but, like the work of Dr. Frankenstein, there’s something undeniably endearing about it.

Popular Magic streamer Gaby Spartz released a video series where she plays through Shandalar. If you want to play along, Shandalar is available as a free download on Abandonware DOS.

Released alongside MTGO in 1997, Magic: The Gathering: BattleMage (PC and PlayStation) took Shandalar’s concept even further, with combat playing out like a real time strategy game with cards representing playable units and abilities.

Also in 1997, Acclaim released a rare arcade game called Magic: The Gathering: Armageddon. As few as four known units exist. The game was so poorly received that one VentureBeat writer saw the only known prototype unit being “used as a shelf for trash” at his local Sunnyvale Golfland in the Bay Area back in the day. Before it could be trashed, the unit was snapped up by a collector and now makes a regular appearance at the California Extreme arcade expo.

Sega released a Japan-only Magic game called, repetitively, Magic: The Gathering for the Dreamcast in 2001. It features cards from 6th edition, Alliances, and Tempest, as well as 10 exclusive cards with Hearthstone-style random effects.