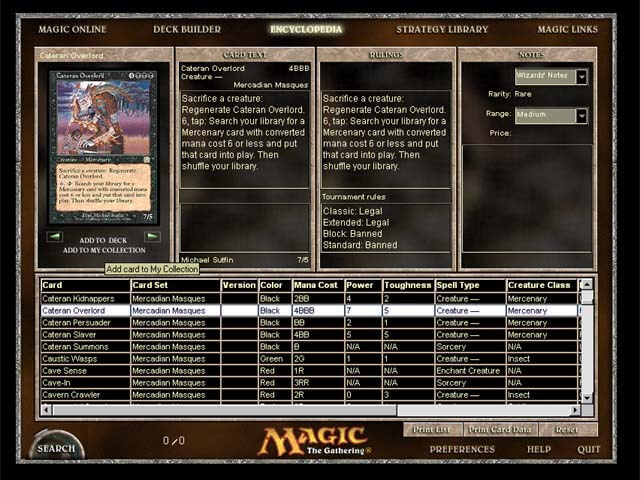 Above: An early Magic: The Gathering digital incarnation was an interactive encyclopedia.

Two years later, in the summer of 1999, a relatively unknown developer called Leaping Lizard, whose slim credits included Sim Farm and a Dreamcast remake of Atari’s classic Centipede, was hired by Wizards with a pitch for an online version of Magic: The Gathering.

“We knew what we wanted to do and did a pretty lengthy developer search among game developers and a few web developers,” Bill Dugan, Wizards’s VP Electronic Publishing at the time, told me. During this search, they spoke with two prominent existing digital CCGs, Chron X and Sanctum, but were “over-skeptical of buying rather than building,” said Dugan. “Leaping Lizard had been recommended to me by another game developer I had worked with before, and we ended up choosing them after they impressed us with their approach and with a quick prototype that embodied the rules in a way that made it clear they would be good to work with.”

Wizards was already thinking about a digital version of Magic at this point, says Saffron Olive at MTGGoldfish. “They had just released the Magic Interactive Encyclopedia, which was designed to allow for digital deck-building. Once you purchased the program, all the cards were free — you simply ‘marked’ the cards you had in your paper collection and used those to build decks and even play games (although it is unclear exactly how gameplay worked). The program was updated with every set release at no cost to the user.”

Wizards liked what they saw from the small development company and brought them onboard to realize the idea of a fully playable online version of the world’s most popular trading card game.

Magic: The Gathering is a complex game. So complex, in fact, that YouTuber Kyle Hill of Because Science recently built a computer using Magic: The Gathering cards based on a paper published by Dr. Alex Churchill, et al. According to the research, Magic is the only known “turing complete offline game.” This makes Magic mathematically as complex as a game can possibly be, and even more difficult than chess and go, according to Hill. Successfully converting that level of complexity to a playable computer game was no small task for Leaping Lizard, especially since there were no other examples to follow. Magic: The Gathering Online was truly unprecedented.

Alpha testing for Magic Online with Digital Objects (as it was called at the time, ) started in August 2001, with wide beta testing beginning in November of that year. It officially launched on June 24, 2002. For the first time ever, Magic players could connect online to play rounds of their favorite game against each other from the comfort of their home.

After several years on the market, paper Magic was a huge game with a staggering number of cards. At launch, MTGO limited itself to sets from 7th Edition onward. Players could choose from several game modes, such as Standard, Block Constructed, and Booster Draft. This was a start, but it was clear there was a long way to go before MTGO was as content-rich as its tabletop counterpart. So less than a year later, Wizards decided it was time for a new version of MTGO.

“The scope of Magic Online was of mammoth proportions,” said Daniel Myers and The Magic Online Team at the time on Wizards’s website. “Even given the difficulty of creating an interface that allowed people to play Magic games versus players all over the world, it had to be a robust enough system to allow the addition of hundreds of new cards every year. Leaping Lizard’s groundbreaking work showed that we had the right crew working with us.

“Magic Online is the first program to consistently and accurately translate the interactions between individual Magic cards and the game rules. Many people thought this task alone was insurmountable, but the Lizards proved them wrong. Not only was it possible, but possible to do well.”

Despite this praise, Wizards ended their relationship with Leaping Lizard in May 2003 and brought the design and development of MTGO in-house.

“In a world of online strategy and roleplaying games,” Myers continued, “Magic Online is the first truly successful eTCG. And we’re not willing to rest on our laurels now.”

Wizards had huge ambitions for MTGO’s next phase, but this decision to hand the game off to an internal team is when things started going sideways, Titus Chalk told me. Chalk is the author of Generation Decks: The Unofficial History of Gaming Phenomenon Magic: The Gathering.

The launch of MTGO V2 on July 28, 2003, was “disastrous,” recalled Stein. “Servers constantly crashed, the rules engine didn’t function properly, and numerous bugs made the playing experience miserable. Wizards decided to turn off the servers, putting them into no-pay beta mode, while they worked out the kinks.”

There were many calls from fans for Wizards to rollback to V1, but the way the internal development team built the latest expansion set made a rollback nearly impossible.

“We made some bad decisions,” said Myers in August, 2003. “We’re stuck with the results now, and we’re trying to fix everything as quickly as possible. We’re just sorry that we ended up bringing you along on the roller-coaster ride.”

Later that month, Wizards shut down MTGO to resolve ongoing issues. Once the game returned in fall 2003, Randy Buehler, Magic’s lead developer at the time, tried to put some positive spin on MTGO’s troubles. “The big picture is that Magic Online has been so successful that we’re outgrowing the initial design,” he said. “We are truly sorry that we put the Magic Online community through this, but we are optimistic that ten years from now we’ll look back on this as the Magic Online-equivalent of the Homelands set: Mistakes were made and we shouldn’t have done it that way, but we learned from it and the game survived just fine.” 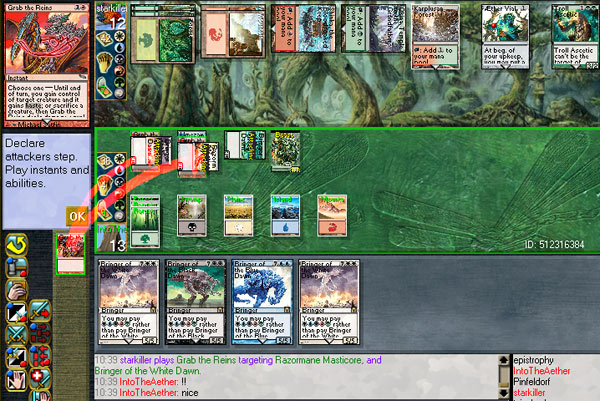 Above: Magic: The Gathering Online as it stood in version 1.

In February 2004, Myers announced MTGO V3. It was no longer possible to work with the foundation laid by Leaping Lizard and built upon by Wizards’ internal team, he admitted. “Magic Online needs to be rebuilt from the ground up.”.

“Things could only get better with V3, couldn’t they?” said Florian Koch in MTG Arena Is Killing Magic Online for ChannelFireball, a large retailer and website focusing on Magic content. After serious delays, Wizards finally released Magic Online V3 on April 16, 2008, over four years after the update’s initial announcement.  “It turns out Wizards had delivered a disastrous product. It was ugly, lacked core functionality, the UI seemed to make things as hard as possible, and the servers weren’t super-stable either. There was nowhere else to go, though. If you wanted to play Magic online, then this was all you had.”

MTGO was in a tough spot. It started life with a mandate to replicate tabletop play as closely as possible, which pulled it away from the type of thinking required to build a sustainable and future-proofed digital platform.

“I was excited to play in the MOCS,” Kibler said in a blog post. “Not only is the MTGO Championship a unique event in which it would be exciting to compete, but the winner of the event gets $25,000 and an invite to the World Championships next year.”