Like many Magic players, my relationship with the game has waxed and waned over the decades since I cast my first spell. It was a fun, ultra-casual experience in fourth grade, when my opponents and I barely knew the rules, and then something a bit more serious in high school. It always lingered in the back of my mind, in no small part because its influence on me as a reader and writer was immense, but the time and opportunity to play it was almost zero as I grew older.

But as is the tendency of things like Magic, it crept its way back into my life. Casually at first, before turning into a full blown obsession. Several years ago, my friend and I assembled a couple of cheap decks, with the idea that we could pull them out to play some casual Magic whenever the mood struck. 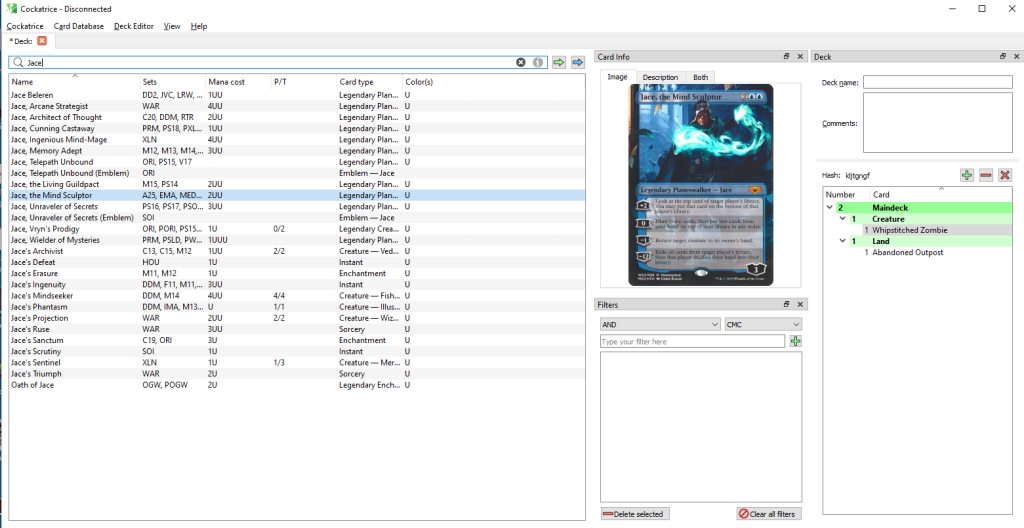 Above: Cockatrice is an open-source card collector to build Magic decks without owning the cards.

It’s no secret that Magic can be an incredibly expensive hobby, with cards costing from pennies to tens of thousands of dollars. For the millions of fans who only play the game around the kitchen table with their friends, “proxy” cards are common. These are pretend cards ranging from low quality counterfeits bought on eBay, to cheap commons with “Black Lotus” scrawled across the front in sharpie. Digital Magic’s own version of proxy cards come in the form of XMage and Cockatrice.

These long-running, open source platforms are not endorsed or supported by Wizards of the Coast. They offer none of the UI and gameplay refinements that make Arena so fun or MTGO so comprehensive, but they do give players a way to experience the game with low overhead by letting them use imported card data to play against each other with digital proxies.

It didn’t so much snowball from there as turn into an avalanche.

After having kids, it became increasingly difficult to carve out the time required to play paper Magic despite my rediscovered enthusiasm for the game. My friends left town or started their own families, and local tournaments often ran during my kids’ bedtime. I dabbled with MTGO, but it wasn’t for me. I started playing less and less Magic, even if I was still buying cards, brewing decks, and following the competitive scene via social media.

Then in November 2017, I got an invite to a closed stress test for Arena.

While little me was playing Magic and Pogs on the schoolyard, kids nowadays are glued to Fortnite and Minecraft. While Wizards once had the corner on that market, it’s been lagging behind in recent years as the attention of kids and adolescents has shifted to the digital realm.

Under the direction of then-new president Chris Cocks in early 2017, Wizards created the Digital Games Studio, headed by industry veteran Jeffery Steefel, VP of digital. A month later, the team announced Magic Digital Next, which Steefel described as the “internal umbrella term for the entire landscape for Magic: The Gathering experiences around digital games.”

Steefel’s background is not in trading card games but video games, where his experience stretches back to the mid-’90s. He was involved in creating many successful massively multiplayer online role-playing games like Asheron’s Call 2: Legion and Lord of the Rings Online: Shadows of Angmar. The writing was on the wall, and fans immediately started talking about MTGO’s successor.

“What we’re doing with Magic Arena, we’re taking the real gameplay rules of Magic, which is what Magic Online has, but we’ll focus, at least at the start, on our front list play, our current Standard and Draft formats,” Magic’s vice president of global brand strategy Elaine Chase told VentureBeat the day it was announced. “We’ll make it in a beautiful interface and quick play style that really matches the way people play games today.”

Arena is Wizards’s attempt to take back the schoolyard and Twitch.

Sideboard: Duels of the Planeswalkers 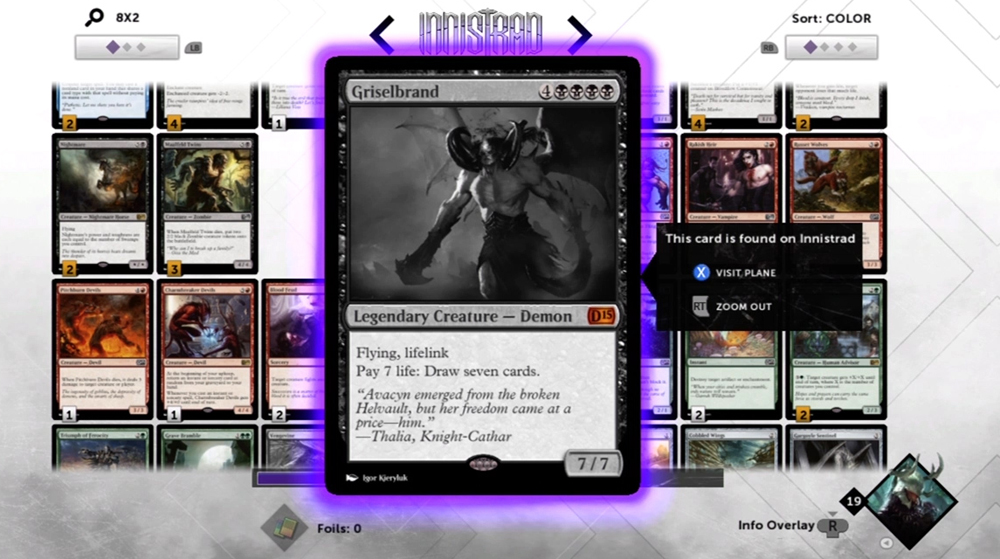 Unlike MTGO, Duels of the Planeswalkers was not regularly updated to include new expansion sets. Instead, it featured it’s own expansion packs, which added new decks, campaign matches, and challenges. Wizards of the Coast released several standalone revisions of the game over the next several years, culminating with Magic Duels in 2015 (which did include regular game updates, but those ceased in 2017 to make way for Arena.)

Unlike its big brothers, Arena is a digital collectible card game—a major difference from its paper format and MTGO, which are trading card games. In paper and on MTGO, players are expected to trade cards to other players for the cards they need, a swap of assets. Arena doesn’t allow any trading; instead, it gives the players “wildcards” of varying rarity that allow players a 1-for-1 swap for any card of that rarity they want.

This is only the first of Arena’s philosophical departures from MTGO. Another is its Game Rules Engine (GRE), which Arena’s Chris Clay called “the perfect Magic judge” in an interview with PCGamesN. It’s basically an engine that can interpret Magic’s immensely complex rules by reading the card text and extrapolating behaviour, removing the requirement to individually develop every card. “Part of the whole concept of authentic Magic is looking to the tabletop experience and seeing just how people play cards like that,” Clay continued. “[We] make sure the rules are true on the backend but in the client look for ways to ease the play.”