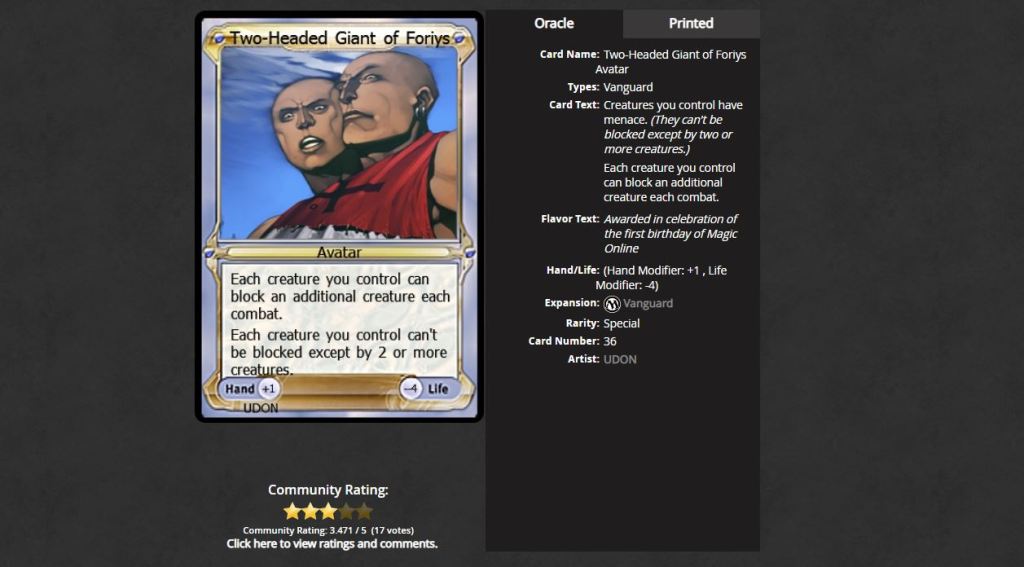 Above: Does Magic now have twin titans with Online and Arena?

While it may seem strange to new players and against general wisdom, Wizards is currently dedicated to supporting and expanding both of Magic’s online platforms. They serve different audiences and purposes, and the path forward for Arena to become a robust, full-featured version of Magic, giving broad access to Magic’s 20,000-plus cards, is long, fraught with uncertainty, and potentially impossible.

So, how does Arena’s slimmer, more streamlined and streamer-friendly approach fit with MTGO’s older and bulkier presence?

Both platforms offer different advantages and disadvantages for pro players, said Scott-Vargas. “Arena is the best place to play Standard, and by far the best thing to stream. It’s also made it possible for many new opportunities and tournament series to happen. MTGO is important for practicing older formats, primarily Modern [and Pioneer], and until we get human drafts on Arena, that’s where I tend to practice drafting as well.”

“It has been interesting to see Magic as a digital entity unfold,” said Partlow. She covers Magic’s Modern and Pioneer formats for TCGPlayer, but neither format is available to play on Arena. Despite being somewhat outdated, “Magic Online has been the de-facto option for so long” and does a good job at replicating the paper game. “Arena is the complete opposite of Magic Online, but what it offers in aesthetics it struggles to provide the game as a whole.”

Magic in all its forms can be expensive. A major focus of Partlow’s Magic coverage is how to play the game on a budget. Along with paper, both digital platforms offer opportunities for players who want to play the game without spending a lot of money, but only Arena offers an obvious way to play for free. “However,” she pointed out, “it does take up more time as there is a ‘grind’ element to it. Like any hobby, you can put as much money as you want into Magic for as long as you get satisfaction from it.” MTGO also offers good options, she said, such as deck rental services.

Cao said the focus for his team is to find the balance for newcomers and casual players between “creating an authentic Magic experience that features really rich and deep strategic gameplay, and a new player experiences that onboards people through a tutorial and then rewards them accurately for mastery.” Wizards is continuing to invest in Arena’s extended new player experiences “because we’ve seen so much success with our tutorial rates so far.”

“While it’s wonderful that Magic Arena is full Magic in the sense that it has all of the rules and recent cards, what makes Magic the greatest game on Earth is that you can play it in whatever way you enjoy the most. This is what Arena is missing.” — Saffron Olive

Now that Arena has launched, it’s under closer scrutiny from players and content producers alike. It can no longer wave-away platform issues by reminding players that it’s an in-development product, and both Saffron Olive and Lewis are more bearish on the platform now than when it first launched.

“I was expecting more from Arena now that it has officially released,” said Saffron Olive, “Over the past couple of years of beta, there were problems with the client that were somewhat easy to look past thanks to the beta tag. Unfortunately a lot of those issues still persist to some extent.” He still enjoys playing Arena despite these issues and he expects Wizards will continue to work on improving the experience. 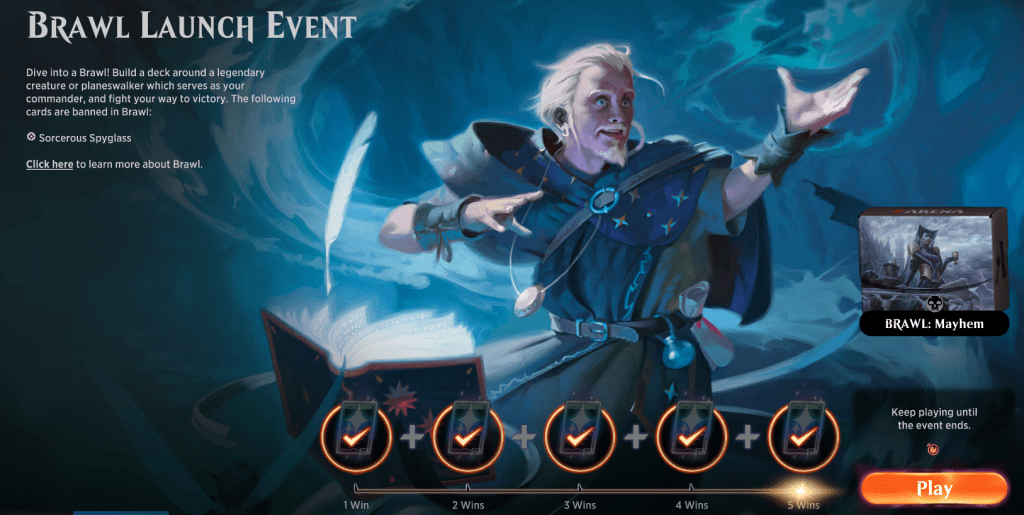 Above: Brawl is a new mode for Magic: The Gathering –Arena.

One major area of concern for players is the lack of game modes available on Arena. After launching with only two modes during the closed beta period, Arena has since introduced several new formats, including Sealed, Brawl, and special limited-time events, but it’s still short on options compared to MTGO and paper Magic.

“While it’s wonderful that Magic Arena is full Magic in the sense that it has all of the rules and recent cards, what makes Magic the greatest game on Earth is that you can play it in whatever way you enjoy the most,” Saffron Olive wrote in a piece on MTGGoldfish. “This is what Arena is missing. While the client can skate by while Standard is good, to reach its true potential and be a long-term success, giving players more options to play the game in whatever ways they find enjoyable is essential.”

Magic’s competitive scene has undergone some massive changes over the two years since Arena’s unveiling. Despite an initially rocky launch for Magic esports, Arena has been leading the charge and is quickly becoming one of the most prominent ways to play Magic at the pro level. After two decades of the highest level of competitive play taking place exclusively on tabletops, Wizards made a big bet on digital Magic when it announced in early 2019 that it was replacing its long-running Pro Tour circuit with the newly minted Mythic Championships. Where Pro Tours had always been a paper event, the Mythic Championships included both paper and Arena tournaments—something the company never attempted with the streamer-unfriendly MTGO.

However, combining the two formats under one competitive umbrella presented a lot of issues, Saffron Olive told me, and it seems like Wizards of the Coast agreed. Less than a year after the first Mythic Championship, Wizards replaced them with the Arena-based Mythic Invitationals and the paper-based Players Tour.

“Having two different pathways for tournament play—one for paper and one for digital—can be a good thing,” said Saffron Olive. “There are still a lot of differences between paper and digital play, especially with Arena.” He speculates that Arena might become home for the competitive formats that feature Magic’s newest cards, like Standard, while paper-based competitive play might focus more on Magic’s “legacy” formats, like Modern or Vintage, that include cards not available on Arena.

These changes have required huge adjustments for players, pros, and casual viewers of both the digital and paper games.

“It feels a bit … weird?” said Partlow of the recent push toward competitive play on Arena. “I respect that Wizards wants to brand Arena as an esport, so pushing that concept makes sense. It’s weird that there isn’t a public audience that can watch the Mythic Invitational games live, for example. I imagine in the world of technology this is not difficult to achieve.” This results in the Arena-based Mythic Invitationals feeling “lifeless” for viewers, Partlow said, and she worried that digital clients have the unfortunate tendency to remove the “Gathering” aspect from Magic: The Gathering, a problem she sees across a lot of esports. “I remember a time when couch video gaming was common.

“Magic has been around long enough to have an identity which extends outside of pixels and polygons. I would like to see more public engagement at these events, similar to what League of Legends and Hearthstone does. There is a clear demand for people to attend these events.”