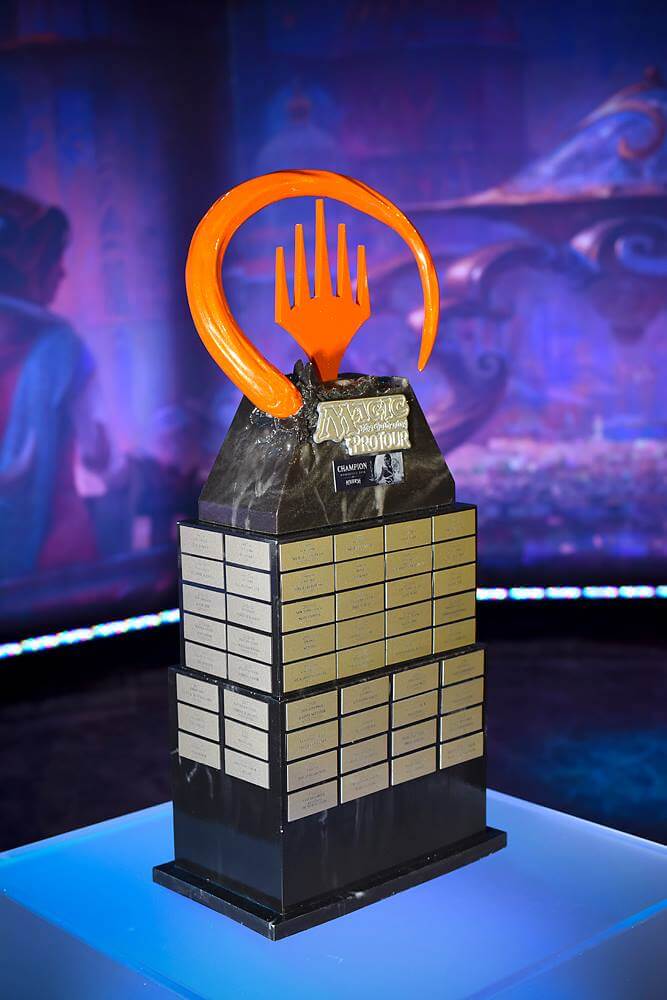 Players, though, have good things to say about the experience of playing in the digital events. Scott-Vargas thinks the Arena-driven competitive events are “incredible.” As Magic’s first foray into true esports, “they are a completely different experience than their paper counterparts,” he said. “I’ve been lucky enough to be invited to two of them, and both were fantastic experiences. I mean, getting to walk on stage while fireworks are going off? All that’s missing is some entrance music and we are practically talking pro wrestling here!”

Scott-Vargas is known in the community for his sense of humor, and was perhaps being glib with me, but it’s clear that Wizards sees Arena as a tool that will help reset the perception of Magic as a complex game people play in stuffy tournament halls and cramped local games shops.

“We have a new system for Magic competitive in 2020 that leans into the strengths of the individual platforms,” Cao told me. I spoke with him just before Wizards announced that Mythic Championships would be split into the Players Tour and Mythic Invitationals.

“Arena makes for a great broadcast environment,” he continued, “and opens up qualification paths for players in regions that don’t have top-tier competitive play available. It also provides any player, regardless of skill level, a head start on figuring out the meta, because we have traditionally debuted new card sets in Arena before tabletop, and you can play new games at a much quicker pace [on Arena] than on tabletop.”

“Arena is impacting competitive play both by offering a more fun platform to play and practice and by expanding the opportunities available,” said Scott-Vargas. “Magic being a much better viewing experience on Twitch deeply impacts competitive play in a positive way.”

“There really aren’t many benefits to broadcasting paper Magic compared to digital,” Saffron Olive told me. “If we ever get to the point where Arena has all of the formats (which is likely still years and years away), I’d expect we’d see all (or very close to all) tournament coverage to be digital.”

Saffron Olive believes that in Wizards’ “dream world” all competitive play will eventually move to digital platforms, while paper will remain the realm of formats that emphasize the Partlow’s “Gathering” element, like Commander and casual kitchen table games.

“Whether or not this actually happens is another question,” Saffron Olive continued. “Pro players have a long history with paper Magic, as do many people inside Wizards, and I’m not sure they will accept paper coverage and tournaments going away all together. Regardless, I do expect the balance to continue to shift towards digital and away from paper over the next few years, barring something catastrophic happening to Arena.”

Change doesn’t happen overnight, as evidenced by the streamers I spoke with about the preferred platform among their viewers. Amazonian’s viewers regularly refer to MTGO as “a spreadsheet simulator,” while Lewis’s audience has been drifting back to the older platform after an initial honeymoon period with Arena. “I think there was this overall excitement that we might finally have a dynamic, state of the art digital MTG experience,” Lewis said. But then the cracks appeared. “Now many players are revisiting Magic Online, as its only real fault is a silly looking interface.” In his experience, most Magic players would rather play “real Magic.” They want to collect and trade cards with other players, “and that is causing a lot of scrutiny and disinterest in Arena.”

For Lewis’s YouTube audience, though, no digital version of the game quite beats the original. “The truth is that paper Magic still rules supreme. A video about Arena is not going to be as successful as a video about which protective sleeves are best suited for keeping your paper cards safe.”

Given this popularity among his fans, Lewis is concerned that the recent focus on Arena for competitive play comes at too high a cost. “We’ve seen a near complete dismantling of the organized play system that Magic has had for nearly a quarter of a century,” he said, echoing concerns from other players like Saffron Olive and Matt Sperling. While Lewis agrees that Arena is the best way to watch competitive Magic, he sees opportunity for both formats to thrive. “I think that moving high level play to Arena makes a lot of sense,” he said. “However, I do think that if there was proper interest and resources that the quality of paper gameplay coverage could be increased dramatically. I think there’s room for both, and I think both benefit the game in different ways.”

No matter what happens, the game’s future rests in Wizards’s capability to develop and maintain a healthy and balanced community of players no matter how they play the game.

“I think we are at a very critical crossroads,” he told me. “I think Wizards may be looking at Arena and wanting to make not a supplement to Magic: The Gathering, but a replacement. The problem is that you should never put your eggs in one basket.” They need to recognize that Magic is strongest when all platforms are supported, he continued. “But I don’t think that’s what is happening.”

Paper and digital Magic can co-exist Lewis told me in a follow-up email. “I feel very strongly that they can grow to further develop one another, but the company that makes the game has to want both to succeed, has to see the value in both, and I am very worried all they can see right now are digital dollar signs.”