Along with just about every other major sporting event, the Wimbledon grand slam tennis tournament was canceled this year due to the COVID-19 crisis. However, organizers at the All England Lawn Tennis & Croquet Club (AELTC) have tapped long-time partner IBM to create a virtual two-week event consisting of classic matches dating back more than 40 years.

To go beyond just bringing old matches to modern digital platforms, IBM and AELTC have leveraged AI techniques to revitalize old footage and appeal to modern viewers. With matches stretching as far back as 1977, a wide range of video quality is to be expected, and older recordings tend to have an issue with visual “noise.”

“To the naked eye, this noise is like static in the image, with color pixels dancing,” IBM executive Sam Seddon told VentureBeat. “Along with the movement within the image, this is seen as ‘blurring’ and lack of color sharpness. For modern audiences, this historic content may be less appealing because it is a lower quality than what they have become used to.”

Remastering old footage is hardly a new concept, of course. But while IBM initially applied more traditional video enhancement techniques to the footage, it has also turned to AI techniques like Super Resolution and Deblurring to bring greater clarity to some of the older matches. This effort involved creating custom AI models built on IBM Cloud, using over 10,000 images from more recent Wimbledon tournaments. To train the system, IBM created an alternative version of each image, one that looked old and fuzzy.

“In this way, the system learned the differences been new and ‘old’ and subsequently how to reverse the process to partially modernize old color imagery,” Seddon continued. “In many ways, Wimbledon is timeless, and modern imagery was the perfect input to inform the AI model what Wimbledon content ‘should’ look like.”

This before (left) and after (right) clip highlights the level of improvement:

Wimbledon was already using various AI-powered smarts and has been ramping up its use of IBM’s Watson in recent years. For example, Watson helps broadcasters capture the best parts from each match and automatically package them into a highlights reel within minutes of the match ending. To do this, it listens to things like crowd cheers to identify big points and ball-strike noises that could signal long rallies, as well as observing the players’ gestures and reactions. This saves human curators from having to manually sift through matches to pull out the best moments.

IBM said it is applying similar AI sound analysis to this year’s “event” to automatically find the most exciting moments in historical matches. “Fans will now have a new way to navigate the greatest moments at Wimbledon,” Seddon added. 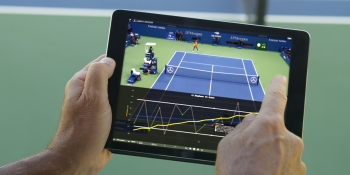 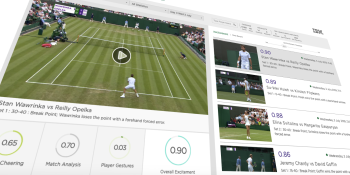