Koji has raised $10 million for its platform for creating interactive social media posts. It’s a remix tool that anyone can use to make and share interactive selfies, memes, and games.

TikTok popularized “remix” culture (taking one piece of content and modifying it for another purpose) and has grown to 800 million active users, but Koji wants to go one step further with its own broadly available, standards-based social platform that can bridge many other platforms by making it easier to share social content like minigames. During the beta period, the company claims that people made 150,000 Kojis and played them 10 million times.

The San Diego-based company spent the past year beta-testing the product, CEO Dmitry Shapiro said in an interview with GamesBeat.

“TikTok introduced a new wrinkle to this concept of remixing, not starting from scratch, but starting from something that already exists and changing it,” Shapiro said. “People thought this was copying things in the past and that wasn’t valuable. But TikTok has shown that is not the case. It showed that remixes themselves could be significantly better than the originals.”

Koji’s goal is to create things that go viral. “All of this is really a function of who creates it and who shares it,” Shapiro said. “A big influencer could make a Koji, share it on Twitter, and it could get 20 million plays.”

Above: This is a Koji of Mark Zuckerberg.

Based on a full-stack, standards-based Java application, Koji is like WeChat’s chat programs, but in this case Koji generates a link that you can share on any platform. It supports supports multimedia, audio, video, 3D graphics, augmented reality, and virtual reality content. It has templates as well.

“My 6-year-old knows how to do this,” Shapiro said. “We believe that the interactivity is one of the next big things on that spectrum of things that can be democratized.”

Shapiro claims that creating a Koji is simple. Anywhere you find a Koji, you can simply tap or click the “remix” button. Or visit the Koji site, pick a template, and click the “remix” button to customize with images, colors, sounds and other options, and then share to your feed on any social platform. Hundreds of templates are currently featured, with new ones being added multiple times per day.

How influencers have created Kojis 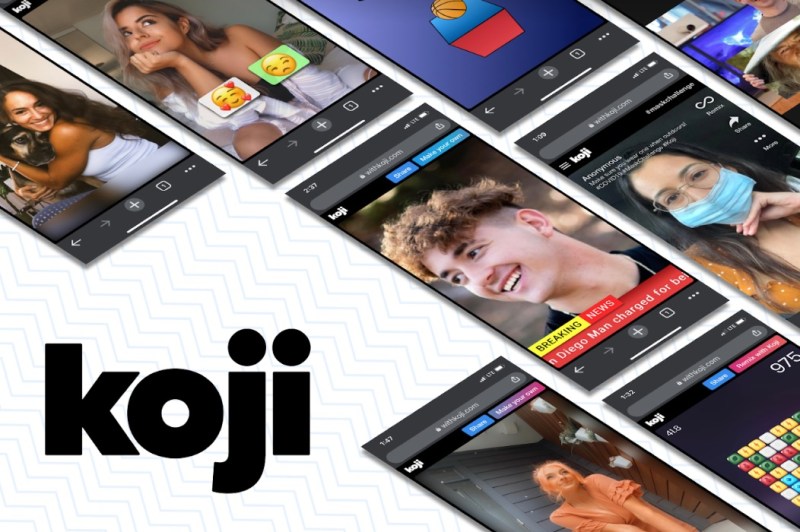 Above: Koji was made for influencers.

Just as TikTok made remixing easier, Koji wants to do the same with interactivity. During its stealth days, Koji scored some interesting partnerships. Burger King retweeted a Koji created by a fan about the Moldy Whopper Ad Campaign, and it got tens of thousands of plays, inspiring over a dozen other Burger King games. The average time playing the game was 1 minute and 48 seconds, Koji said.

On top of that, YouTuber ThatYouTub3Family went live with a contest, inviting fans to make Kojis using their assets. The result: more than 2,000 Kojis created and a major lift in engagement with the fans.

Above: You can make Kojis for any occasion.

That generally takes more skill to create, but Shapiro claims making remixes of those templates takes almost no skill at all. Those content creators can offer premium templates or license graphics, sounds, music, and other content to remix. Koji takes about 20% of a purchase.

“This platform enables mini apps, a marketplace, the democratization of creation tools, and sort of all the trimmings that are required,” Shapiro said. “It’s like TikTok, but interactive.”

The company has 10 employees.