Devolver Digital unveiled its wacky and wondrous indie video games coming in 2020 and 2021 — all showcased in a funny Not E3 direct show Saturday.

Devolver Digital is the independent game publisher that follows its own path. With the coronavirus wiping out the Electronic Entertainment Expo (E3), this is what we get in 2020: a “high concept digital showcase” that is as over-the-top as Devolver can make it. In the video, “Linda” from Devolver marketing joked that people don’t play video games anymore. They just watch wacky trailers. Devolver “CEO” Nina Struthers (an actress, Mahria Zook) said people like her “tell you what to buy” and “you have been taken for a ride on a bus driven by greed.” (Hmm. I think they’re trying to tell us something about our gaming habits).

It’s hard to believe that Devolver Digital is part of the establishment of video game publishing, as it’s more than a decade old. Mike Wilson, Harry Miller, Graeme Struthers, Nigel Lowrie, and Rick Stults founded the Austin, Texas, company in 2009. They started with a philosophy of having developer-friendly terms and focused on digital distribution. The company’s hits include Serious Sam and Hotline Miami, and it also owns Devolver Digital Films and a majority of Good Shepherd Entertainment.

This year’s special guests included video game personalities and leaders Geoff Keighley, Sonic Fox, Shu Yoshida, Phil Spencer, and more. At least they all looked like those people. Devolver also said that it would post a new game on Steam that is a virtual representation of a huge booth and convention hall at the Devolver Land Expo — just one more chance for the company to mock the canceled E3. 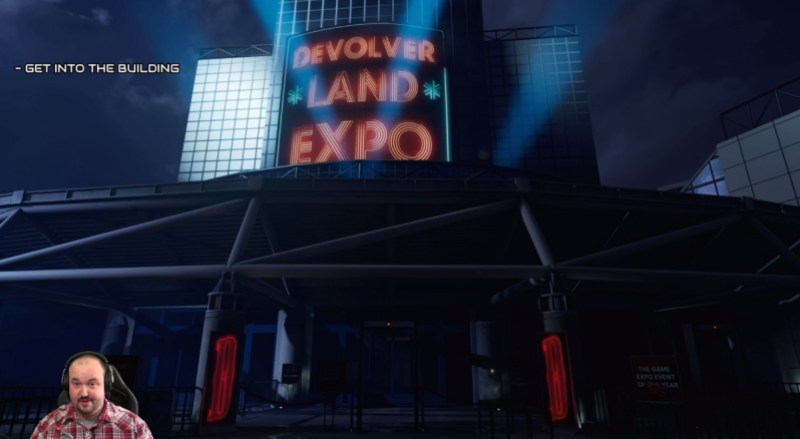 Oh, and the games shown today were:

Lo Wang returns with over-the-top demon-tearing and slicing form in this title from developer Flying Wild Hog. It’s another installment in the story of a fallen corporate shogun who wields guns and samurai weapons. Wang returns with his sidekick, Orochi Zilla, on a mission to recapture an ancient dragon they (accidentally) unleashed from its eternal prison. Devolver said the game would vault the franchise forward with a “fuck ton” of new additions like brutal executions and “buckets of blood.” It’s coming in 2021.

This game from former Arkane (Dishonored, Prey) founder Rafael Colantonio and executive producer Julien Roby is a role-playing game that twists established conventions of the old frontier with surreal fantasy. It has five customizable characters that you can use to create your own story and fight the locals. The game is coming in 2021.

Ronimo Games, the creator of Awesomenauts, is creating the co-op dungeon crawler Blightbound, a sidescrolling action-RPG set in a fantasy world. You can play as an assassin, warrior, or mage. It has three distinct lands, and the launch date is July 29 on Steam Early Access.

This “reverse horror game” from Phobia Game Studio stars an escaped experimental creature. Based on classic Metroidvania design, this sidescroller features a blob-like monster that eats things and gains new powers, tearing and slithering its way into restricted areas through air ducts and other gaps to cause mayhem for humans. It’s coming July 23 to the Switch, PC, and Xbox One.

This project from creators behind the BAFTA-nominated Minit asks the question: What if the sawblade aisle in Home Depot was a massive labyrinth, and also all the saw blades were mobile and had their own special way of trying to kill you?

This cute take on battle royale was one of my favorites from E3 2019. Dozens of players stumble through various competitions in a multistage game show. Only one jellybean contestant among 60 players can survive the wacky physics and colorful chaos. London-based Mediatonic is making the title for release on the PS4 and Steam on August 4.

In this game, thousands of enemies will charge you. But you’ve got an arsenal of firearms. It’s another alien-slaughtering title from Croatian game studio Croateam. It is coming in August to Stadia and Steam.

A side-scrolling game from Skeleton Crew Studio, this action-adventure game about Faraday’s quest is coming in the fall of 2020. You’re armed with a harpoon in the mysterious country of Terraphage, and you’re trying to get back to your homeland.