After rebooting its formula in 2017 with Origins, Assassin’s Creed is getting ready to launch its third game that focuses on RPG mechanics and a giant world to explore. And while the stealth era of Assassin’s Creed lasted for nine games, I wonder about the longevity of this new formula.

This doesn’t mean that Assassin’s Creed: Valhalla may not be good, at least based on what I played. The latest in Ubisoft’s giant franchise is coming out on November 17 season for Xbox One, PlayStation 4, PC, and Stadia. It will also be hitting the next-gen systems, PlayStation 5 and Xbox Series X, which will also release this fall.

I played Valhalla for a couple of hours thanks to a remote demo event from Ubisoft. First off, it’s important to explain how I was able to play this game from home. Ubisoft used Parsec, a screen-sharing service that provided access to the PC version of the game from one of Ubisoft’s computers. This let me try Valhalla without having to download anything, which was neat! But it also means that I wasn’t exactly playing the game at 4K.

Ubisoft Forward comes just a day after Guillemot announced major departures and changes related to sexual misconduct allegations at the company. This started in late June as people came forward and told their stories alleging harassment, misconduct, and more from Ubisoft employees. This statement comes despite having a live show ahead of the presentation.

It’s clear that Valhalla can be an impressive game, especially when it comes to environments. Enjoying the ancient Grecian landscapes is my favorite part of Assassin’s Creed: Odyssey. Valhalla’s Anglo-Saxon England looks just as gorgeous. And although I admit that I picture this part of history as mostly looking a bit brown and dreary, Ubisoft has made this world of vikings and early English vibrant with some colorful vegetation.

But Valhalla still carries a lot of Odyssey’s faults. While the environments look good, the people that inhabit them can be ugly. Most of the main cast looks fine, including your viking player, but the minor characters and background NPCs look awkward. Character animations during cutscenes and dialogue are also still unnatural and stiff.

If that stuff didn’t bother you in Odyssey, I imagine it won’t here. But it is a little disappointing that I didn’t see any significant improvements in these areas. Of course, I’m playing an early version, so there could be improvements coming, but I’m not expecting much based on final releases of past games in the series. Still, it helps center my overall impression of Valhalla. This is a modern Assassin’s Creed game with vikings.

And maybe that’s all it needs to be! A good part of the fun in any Assassin’s Creed game is exploring a different time and place in history, and the Anglo-Saxon viking invasions is a fascinating era for a game setting. Just getting to explore such a place is reason enough for this game’s existence. 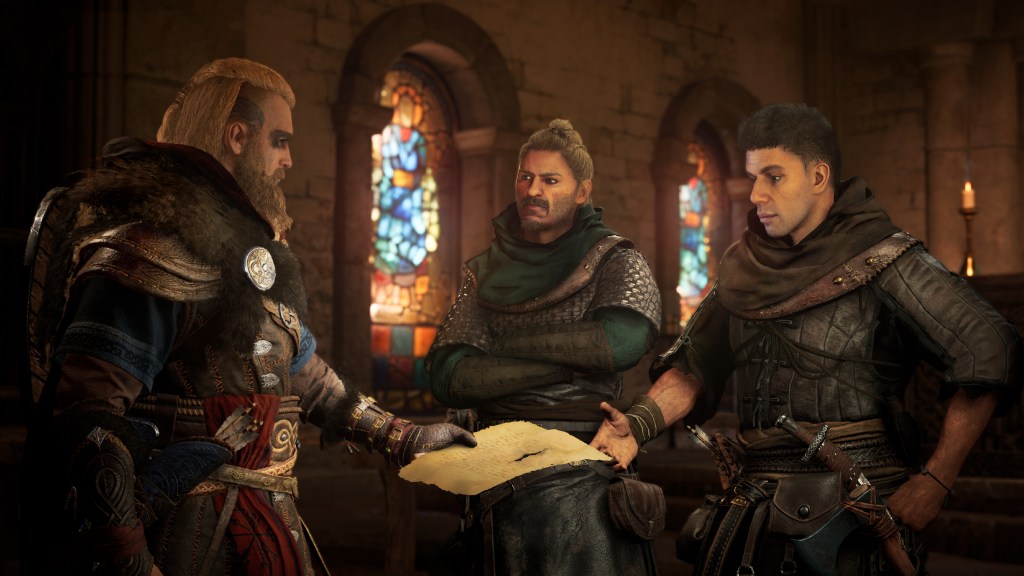 Above: Characters look better in still images than they do in motion.

You will find some changes to the formula. One of the story missions I played had me sail up to an enemy area and initiate a raid, which sent me and all of my viking friends out to war. Odyssey has its large-scale brawls, but this feels like a more seamless and era-appropriate (what’s a viking story without some good raiding) way to handle these kind of melees.

Your bird companion is also less powerful. In Origins and Odyssey, your eyes in the sky could scout out entire enemy camps, making foes visible to you through walls and giving you information on how strong they were. Your raven in Valhalla can still do some scouting, but he won’t highlight every enemy he sees. Instead, you can put down a waypoint on just a few of them. This is a great change, as it means that you’ll have to be careful when being stealthy. And with the return of systems like blending into crowds, stealth feels more important than it has in the last couple Assassin’s Creed games.

Combat, meanwhile, feels much as it did in the last two AC games. You have quick attacks and strong ones, and it’s important to dodge enemy strikes and use your special abilities to help deal more damage. But where Odyssey uses cooldown system for abilities, Valhalla has you using a meter that fills up based on your actions in combat. This has a better flow, as you’re rewarded for doing things like counters and killing blows.

The abilities themselves all feel useful and strong. You can equip eight of them at any time. My favorite had me chucking axes at multiple enemies in range. This was great for those massive brawls, as it was a fast way to deal a good amount of damage. Another skill had me using my axes to fling an opponent to the ground. After that, I could run over and stomp on them, a move that would often kill them. Combat also lets you dual wield weapons, picking any combination you want (even two shields). 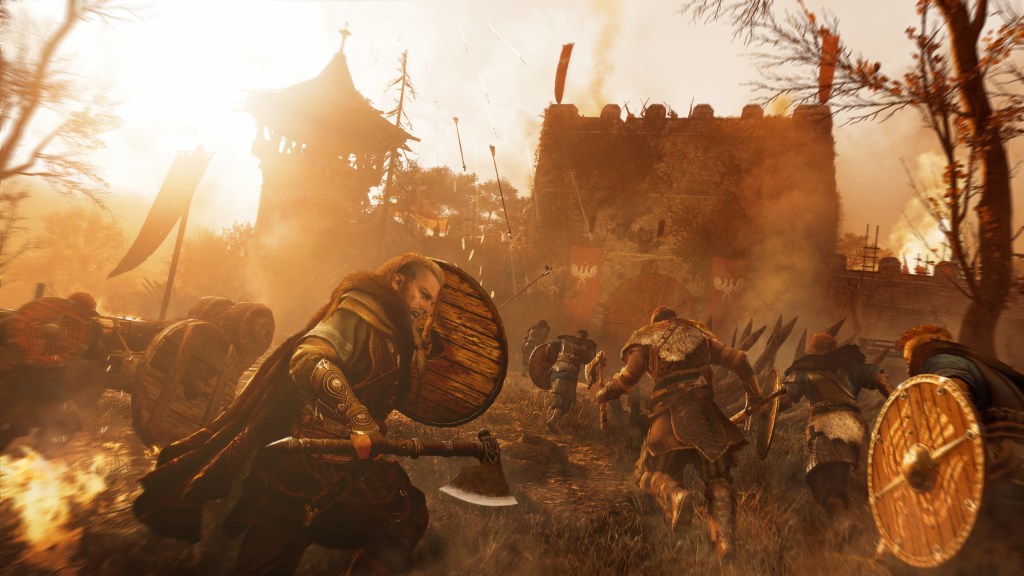 Above: Battles can be big is scope.

So even if you have played hundreds of hours of Origins and Odyssey, you’ll have some new stuff to look forward to in Valhalla. It’s very much an Assassin’s Creed game in that same vein.

And that’s fine. That formula may be starting to feel tired, but a strong setting can still support it. And the Saxon invasion of the Isles feels like a wonderful part of history to turn into an Assassin’s Creed playground.