Ubisoft is launching the open beta today for its new science fiction battle royale game called Hyper Scape, where 100 players fight to be the last one standing while the audience tries to influence the outcome.

Ubisoft revealed Hyper Scape on July 2 as a free-to-play battle royale game, which is a hot genre with titles like Call of Duty: Warzone, Fortnite, Apex Legends, and PlayerUnknown’s Battlegrounds. Hyper Scape will debut on the PC, PlayStation 4, and Xbox One later this summer. Ubisoft just finished its first tech test with players on the PC in North America and Europe.

Ubisoft publicly revealed the gameplay during the Ubisoft Forward event today, which comes just a day after CEO Yves Guillemot announced major departures and changes related to sexual misconduct allegations at Ubisoft. This started in late June as people came forward and told their stories alleging harassment, misconduct, and more from Ubisoft employees.

This is Ubisoft’s first battle royale game, and creative director J-C Guyot said in a recent press briefing that Ubisoft Montreal has been building it for two years. I got a chance to play it for a couple of hours in a preview event, and it had no major issues.

The audience participation part is a new trend. ControlZee recently said it’s making a game that streamers can play with their followers. And Retroit is a street-driving game similar to Grand Theft Auto where the viewers can drop things into the experience to either mess up or aid drivers. SOS tried to do similar audience participation in a Survivor-like show.

During the Forward event, Ubisoft showed the backstory behind Hyper Scape, which was meant as an escape from the crush of urban density in megacities with more than 10 million people. They created a virtual battle royale where people could express their competitive sides in a safe way. But users are disappearing, people are getting hurt, and there’s a dark secret behind Hyper Scape. 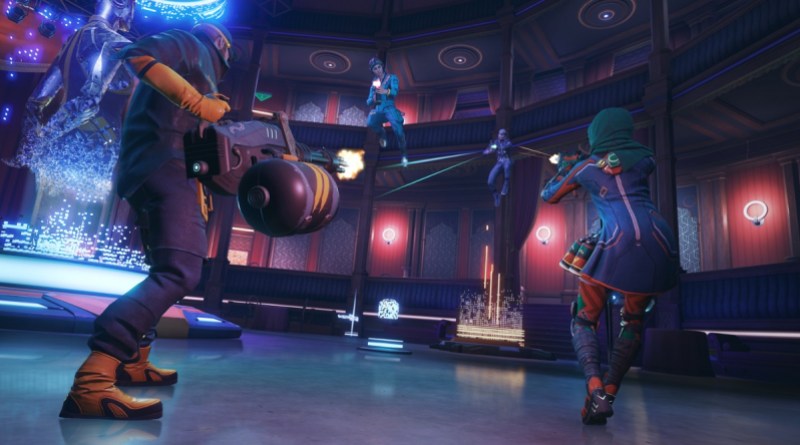 Above: Ubisoft has already nerfed the Hexfire mini-gun’s hit damage to balance the game better.

Hyper Scape’s open beta will also introduce features to the innovative Crowncast Twitch extension, including Battle Pass progression by watching Hyper Scape livestreams on Twitch and the capability for streamers to invite viewers directly to their squad from Twitch chat. These additions are on top of the previously available Viewer Events, which enable all Twitch viewer to have a real-time impact on battle by voting on events that affect all contenders within a match, such as Low Gravity, or Infinite Ammo. The open beta introduces a new event called Haste that increases the game’s speed for all contenders.

The Hyper Scape open beta will include a free 30 tier battle pass alongside an in-game shop offering additional customization options. All Open Beta progress and items will carry over through future live phases and into the full launch, across PC and console.

Alongside the open beta, North America Ubisoft will host a Creators Cup over the next three Fridays from 11 a.m. to 1 p.m. Pacific, featuring some of the top Hyper Scape creators competing for a total prize pool of $50,000.

Graeme Jennings, a senior producer at Ubisoft, said in a briefing that Hyper Scape has three key pillars. It takes place in an urban environment with vertical gameplay. You can fight in the interiors of the buildings or in the streets. You can also gather ability items dubbed “hacks” that you can use periodically with a cool-down period at key moments to give you special abilities, like turning into a rolling iron ball. You can use a dash hack to jump in the air and crash down on enemies. You can drop mines or put up giant walls to protect your squad.

The game has two modes: Crown Rush for squad play, and Dark Haze Solo for solo players. In the latter mode, you play in the dark. The test will feature 10 tiers of the battle pass (which players get for free), nine weapons, and nine hacks.

Hyper Scape can also bring spectators into the action. A streamer can play, and viewers can vote to see what special event to trigger. For instance, they could vote on what kind of special event to trigger. They can make first-aid kits available everywhere or make it easier to jump to the tops of buildings due to low gravity. They can provide infinite ammo. By participating, fans who watch the game can earn points toward a Battle Pass, which helps them progress in the game when they play it.